Human-produced noise and light pollution are troublesome to our avian neighbors, according to new research from a team at California Polytechnic State University, published Nov. 11, 2020 in Nature. Using NASA satellite data, the researchers got a bird’s-eye view of how noise and light negatively affected bird reproduction in North America. The team also discovered 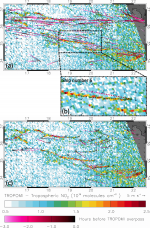 Maritime transport has a direct impact on air quality in many coastal cities. Commercial ships and vessels burn fuel for energy and emit several types of air pollution as a byproduct, causing the degradation of air quality. A past study estimated that shipping emissions are globally responsible for around 400,000 premature deaths from lung cancer

The size of the ozone hole over the Antarctic fluctuates on a regular basis. From August to October, the ozone hole increases in size, reaching a maximum between mid-September and mid-October. When temperatures high up in the stratosphere start to rise in the southern hemisphere, the ozone depletion slows, the polar vortex weakens and finally

Africa Wildlife Tracking (AWT) is using ORBCOMM’s advanced satellite IoT technology to track and monitor animals of all sizes to support their conservation efforts. With the added threat of the COVID-19 pandemic and the need to supply local populations with food, poaching is likely to increase, making ORBCOMM’s IoT solutions more important than ever in

A La Niña climate pattern has developed and is likely to persist through winter, according to an advisory issued by NOAA’s Climate Prediction Center. La Niña—translated from Spanish as “little girl”—is a natural ocean-atmospheric phenomenon marked by cooler-than-average sea-surface temperatures across the central and eastern Pacific Ocean near the equator, the opposite of El Niño 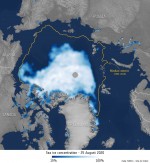 During the middle of 2020, the Arctic has experienced alarmingly high temperatures, extreme wildfires and a significant loss of sea ice. Although hot summer weather is not uncommon in the Arctic, the region is warming at two to three times the global average—impacting nature and humanity on a global scale. Observations from space offer a

When planning hunting seasons and other conservation efforts to protect wild turkeys, conservationists have long depended on forecasts of breeding success. In recent years, however, these estimates have been increasingly off the mark, with populations of the largest game bird in North America consistently smaller than expected. A 2016 Missouri Department of Conservation (MDC) survey

The Mars 2020 mission is part of a long-term effort of robotic exploration of the Red Planet. The 2020 mission addresses high-priority science goals, including questions about the potential for life on Mars. The mission will look for signs of past microbial life itself. The mission also provides opportunities to gather knowledge and demonstrate technologies

Keeping a Steady Eye on Sea Level Change From Space

Over the course of nearly three decades, an uninterrupted series of satellites has circled our planet, diligently measuring sea levels. The continuous record of ocean height that they’ve built has helped researchers reveal the inner workings of weather phenomena such as El Niño and to forecast how much the ocean could encroach on coastlines around