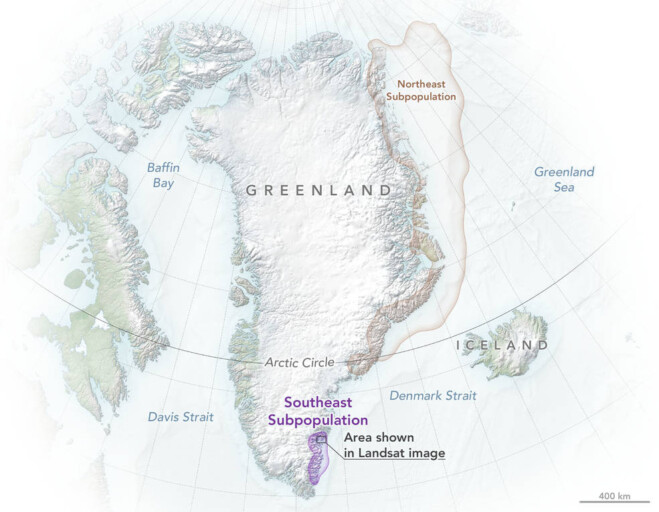 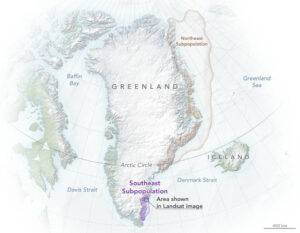 Greenland’s fjords harbor a unique group of polar bears that rely on glacial ice, a NASA-funded study reports in Science.

Polar bears throughout the Arctic depend on sea ice as a platform for hunting seals. As human-caused climate change warms the planet and Arctic sea ice melts away, polar bears are scrambling to find ice to hunt on. But in Southeast Greenland, researchers found that bears survive for most of the year in fjords by relying on ice melanges, a mix of sea ice and pieces of glacial ice that is carved off of marine-terminating glaciers. This group of polar bears has been isolated for several hundred years from their Arctic counterparts and are genetically distinct.

An international team of scientists, including those from the University of Washington and the National Snow Ice and Data Center (NSIDC), tracked bears in Southeast Greenland for seven years and combined their new data with genetic analysis and three decades of historical data from Greenland’s whole east coast. They also used the Moderate Resolution Imagine Spectroradiometer instruments (MODIS) aboard NASA’s Terra and Aqua satellites and NSIDC data to document the fjord and offshore sea ice environment.

Their findings revealed that the Southeast Greenland bears are cut off from sea ice two-thirds of the year, and supplement their hunting by using freshwater ice slabs, which routinely break off from the Greenland Ice Sheet and coastal glaciers. The bears also traipse between fjords by crossing inland ice and trekking over mountains.