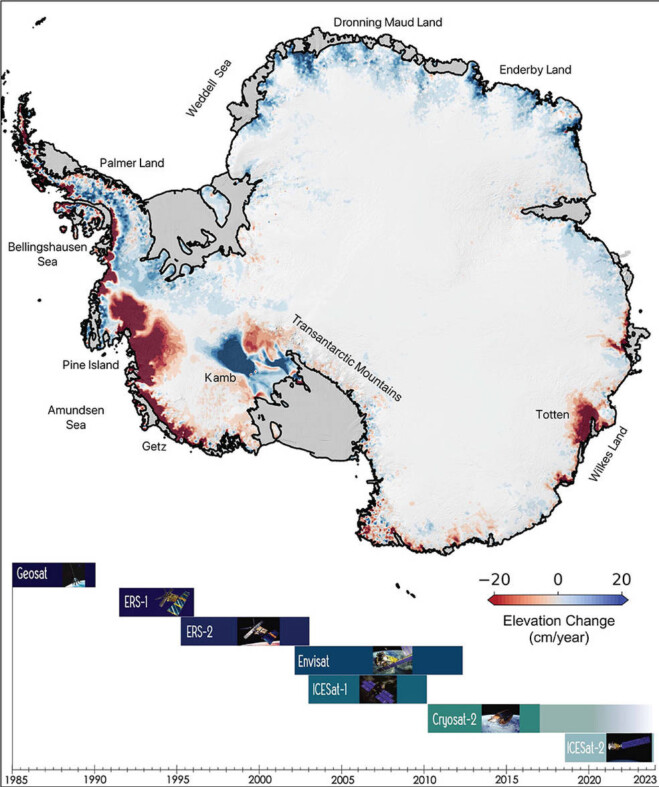 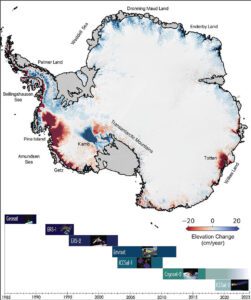 Changes in elevation of the Antarctic ice sheet from 1985 to 2021 are shown. Ice height diminishes (red) as the ice sheet melts by contact with ocean water; it rises (blue) where accumulation exceeds melting. Ice shelves are shown in gray. The missions that supplied data are listed at bottom. (Credit: NASA/JPL-Caltech)

New research on Antarctica, including the first map of iceberg calving, doubles the previous estimates of loss from ice shelves and details how the continent is changing.

The greatest uncertainty in forecasting global sea-level rise is how Antarctica’s ice loss will accelerate as the climate warms. Two studies published Aug. 10, 2022, and led by researchers at NASA’s Jet Propulsion Laboratory in Southern California reveal unexpected new data about how the Antarctic Ice Sheet has been losing mass in recent decades.

One study, published in the journal Nature, maps how iceberg calving—the breaking off of ice from a glacier front—has changed the Antarctic coastline during the last 25 years. Researchers found that the edge of the ice sheet has been shedding icebergs faster than the ice can be replaced. This surprise finding doubles previous estimates of ice loss from Antarctic’s floating ice shelves since 1997, from 6 trillion to 12 trillion metric tons. Ice loss from calving has weakened the ice shelves and allowed Antarctic glaciers to flow more rapidly to the ocean, accelerating the rate of global sea-level rise.

The other study, published in Earth System Science Data, shows in unprecedented detail how the thinning of Antarctic ice as ocean water melts it has spread from the continent’s outward edges into its interior, almost doubling in the western parts of the ice sheet over the last decade. Combined, the complementary reports give the most complete view yet of how the frozen continent is changing.