An unprecedented belt of brown algae stretches from West Africa to the Gulf of Mexico—and it’s likely here to stay. Scientists at the University of South Florida in St. Petersburg’s College of Marine Science used NASA satellite observations to discover and document the largest bloom of macroalgae in the world, dubbed the Great Atlantic Sargassum 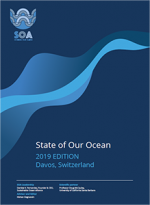 The Sustainable Ocean Alliance (SOA), a global nonprofit organization that advances the impact of young ocean leaders, released its first State of Our Ocean Annual Report,  an annual assessment of the health of our ocean based on the analysis of SOA young leaders and ocean experts. In launching this report at the start of 2019,

The Florida Keys coral reefs stopped growing or significantly slowed their growth at least 3,000 years ago and have been balanced between persistence and erosion ever since, according to a new study by the U.S. Geological Survey (USGS). The study, published in the journal Global Change Biology, also points to coral bleaching and disease outbreaks

Satellite images of phytoplankton blooms on the surface of the ocean often dazzle with their diverse colors, shades and shapes. But phytoplankton are more than just nature’s watercolors: They play a key role in Earth’s climate by removing heat-trapping carbon dioxide from the atmosphere through photosynthesis. Yet a detailed account of what becomes of that

A new NASA-led study shows that climate change is likely to intensify extreme weather events known as atmospheric rivers across most of the globe by the end of this century, while slightly reducing their number. The new study projects atmospheric rivers will be significantly longer and wider than the ones we observe today, leading to

The European Space Agency (ESA) CryoSat mission revealed that, during the last seven years, Antarctica has lost an area of underwater ice the size of Greater London. This is because warm ocean water beneath the continent’s floating margins is eating away at the ice attached to the seabed. Most Antarctic glaciers flow straight into the

Monitoring ocean salinity is essential for understanding its impact on ocean circulation, Earth’s water cycle, marine ecology and climate change. Ocean salinity in the Arctic is of particular interest, because it changes significantly with seasonal ice cover and is expected to decrease as the Greenland ice sheet melts and releases massive amounts of freshwater. Despite

NASA’s Aqua satellite and NASA-NOAA’s Suomi NPP satellite analyzed the temperatures in Hurricane Nate’s cloud tops and determined that the most powerful thunderstorms and heaviest rain areas were around the center of the tropical cyclone after it made landfall near the mouth of the Mississippi River on Oct. 7, 2017. Infrared light provides valuable temperature