Thousands of fires have broken out in the Amazon rainforest. Satellite data show that there are almost four times as many fires this year compared to the same period last year. Apart from Brazil, parts of Peru, Bolivia, Paraguay and Argentina have also been affected. While forest fires normally occur in Brazil’s dry season, which

A new “State of the Climate” report released on Aug. 12, 2019, by the American Meteorological Society (AMS) confirms that 2018 was one of the hottest years on record. Global surface temperatures continued the trend in which every year since the turn of the 21st century has been hotter than any year experienced in the

Losing the remaining Arctic sea ice and its ability to reflect incoming solar energy back to space would be equivalent to adding one trillion tons of CO2 to the atmosphere, on top of the 2.4 trillion tons emitted since the Industrial Age, according to current and former researchers from Scripps Institution of Oceanography at the

Far more accurate than any previous map, this new representation of glacier flows in Antarctica opens the door to an improved understanding of the vast continent and the future pace of sea-level rise. To create the new map, researchers at the University of California, Irvine, and NASA’s Jet Propulsion Laboratory in Pasadena, Calif., combined input

Louisiana is officially sinking. It has been 29 years since the National Geodetic Survey (NGS) measured the state’s subsidence. After completing four absolute gravity observations this past year, with the help of LSU’s Center for GeoInformatics (C4G), the NGS’s most-recent findings show the state’s change in elevation. “This is the second observation NGS has performed

During summer 2019, 28 undergraduate students are participating in an eight-week NASA airborne science field experience that will immerse them in the agency’s Earth Science research. NASA’s Student Airborne Research Program (SARP), embarking on its 11th year,  offers an opportunity for undergraduates majoring in sciences, mathematics and engineering to participate in all aspects of a

An unprecedented belt of brown algae stretches from West Africa to the Gulf of Mexico—and it’s likely here to stay. Scientists at the University of South Florida in St. Petersburg’s College of Marine Science used NASA satellite observations to discover and document the largest bloom of macroalgae in the world, dubbed the Great Atlantic Sargassum 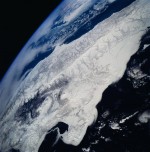 Looking For Freshwater In All the Snowy Places

Snowflakes that cover mountains or linger under tree canopies are a vital freshwater resource for over a billion people around the world. To help determine how much freshwater is stored in snow, a team of NASA-funded researchers is creating a computer-based tool that simulates the best way to detect snow and measure its water content

By John Anderson, Strategic Business Development, FLIR Systems Inc. A new tool is making roof inspections safer, faster, and more efficient by reducing the need for dangerous treks up and across rooftops. Many roof inspectors are now investing in unmanned aerial vehicles (UAVs)—commonly known as drones—equipped with thermal and visible cameras so they can more