Shedding Light on How Much Carbon Tropical Forests Can Absorb

Tropical forest ecosystems are an important part of the global carbon cycle as they take up and store large amounts of carbon dioxide. It is uncertain, however, how much these forests’ ability to take up and store carbon differ between forests with high vs. low species richness. New International Institute for Applied Systems Analysis (IIASA)

The bison population has grown rapidly during the last two decades in Yellowstone National Park. This creates complex situations for wildlife managers when the animals follow good grazing opportunities beyond the boundaries of the park and come into contact with surrounding communities. A NASA study has now found a link between climate change effects on

With a Speaker and Four microphones, Drones Can Echolocate Like Bats

Similarly to how bats use echolocation to orient themselves with their surroundings, mathematicians have found that the same can be done with microphones and a speaker on a drone with the help of algebra and geometry. This signal processing research has potential applications for people, underwater vehicles and even cars, said Mireille “Mimi” Boutin, a

Drones are commonly known for flying in the sky, but a new breed is rolling around on the ground and swimming in the ocean. Aquiline Drones (AD) will be powering GuardBot’s spherical and amphibious robotic vehicles via the AD Cloud. “Our new alliance with Aquiline Drones now gives us the ability to program our bots

The Arctic is one of the fastest warming places on the planet. As temperatures rise, the perpetually frozen layer of soil, called permafrost, begins to thaw, releasing methane and other greenhouse gases into the atmosphere. These methane emissions can accelerate future warming—but to understand to what extent, we need to know how much methane may

Antarctica’s Thwaites Glacier has been in the spotlight in recent years, as scientists have undertaken a multi-part international project to study the vast glacier from all angles. The urgency stems from observations and analyses showing that the amount of ice flowing from Thwaites—and contributing to sea-level rise—has doubled in the span of three decades. Scientists

A study revealing how the climate will shift by 2050 in major cities around the globe has been released by apartment rentals platform, ​Nestpick.com​. To understand how some of the most popular cities in the world will be affected by climate change, the apartment platform set out to determine how potential temperature shifts, water shortages 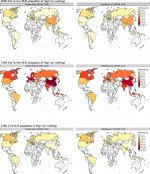 Heavy rainfall has triggered flooding in southern Iran, particularly in the Sistan and Baluchestan, Hormozgan and Kerman provinces. The downpour has led to blocked roads and destroyed bridges, crops and houses, displacing thousands of people. This image, captured by the Copernicus Sentinel-2 mission, shows the extent of the flooding in the Sistan and Baluchestan province