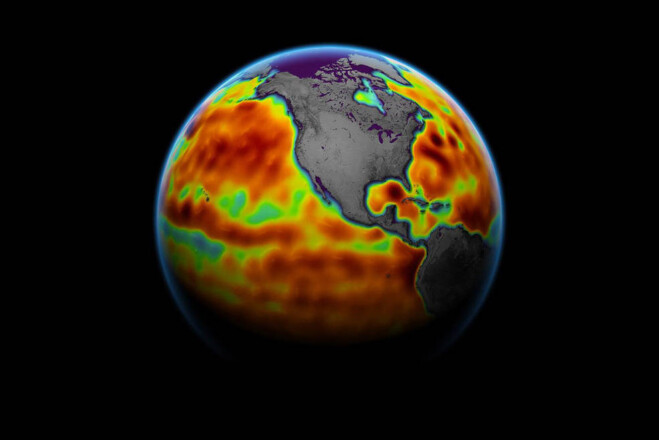 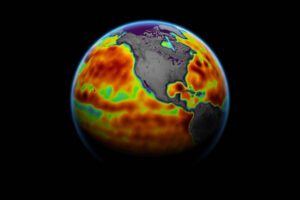 This image of Earth shows sea level measured by the Sentinel-6 Michael Freilich satellite in 2021. Red areas are regions where sea level is higher than normal while blue indicates where it’s below normal. The satellite collects measurements for about 90 percent of Earth’s ocean. (Credit: NASA Earth Observatory)

By 2050, sea level along contiguous U.S. coastlines could rise as much as 12 inches (30 centimeters) above today’s waterline, according to researchers who analyzed nearly three decades of satellite observations. The results from the NASA Sea Level Change Team could help refine near-term projections for coastal communities that are bracing for increases in both catastrophic and nuisance flooding in coming years.

Global sea level has been rising for decades in response to a warming climate, and multiple lines of evidence indicate the rise is accelerating. The new findings support the higher-range scenarios outlined in an interagency report released in February 2022. That report, developed by several federal agencies—including NASA, the National Oceanic and Atmospheric Administration (NOAA), and the U.S. Geological Survey—expect significant sea level rise over the next 30 years by region. They projected 10 to 14 inches (25 to 35 centimeters) of rise on average for the East Coast, 14 to 18 inches (35 to 45 centimeters) for the Gulf Coast, and 4 to 8 inches (10 to 20 centimeters) for the West Coast.