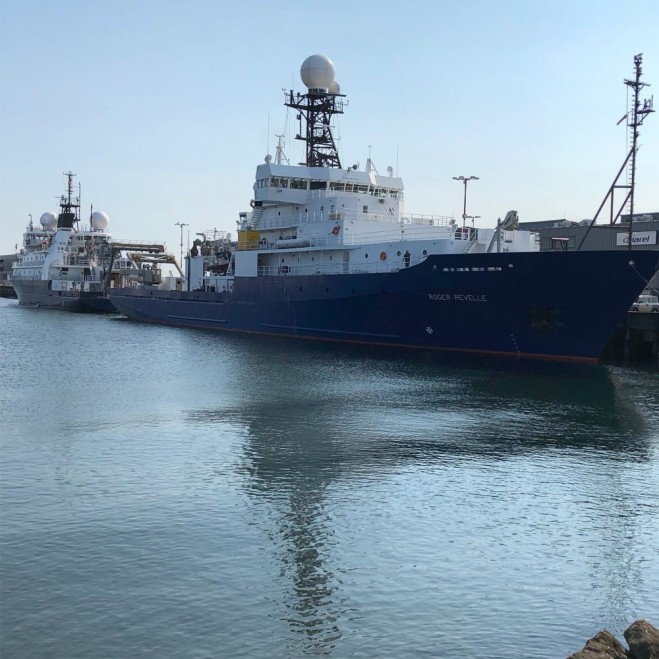 Preparations are underway onboard the research vessels Sally Ride (left) and Roger Revelle (right) as the EXPORTS team prepares to ship out. The two ships will carry more than 100 scientists from more than 20 different research institutions as well as lab gear and underwater robotic explorers. (Credit: NASA’s Goddard Space Flight Center/Michael Starobin)

Satellite images of phytoplankton blooms on the surface of the ocean often dazzle with their diverse colors, shades and shapes. But phytoplankton are more than just nature’s watercolors: They play a key role in Earth’s climate by removing heat-trapping carbon dioxide from the atmosphere through photosynthesis.

Yet a detailed account of what becomes of that carbon—how much of it goes where within the Earth and for how long—has beset scientists for decades. So while NASA’s Earth-observing satellites can detect the proliferation and location of these organisms, the precise implications of their life and death cycles on the climate are still unknown.

To answer those questions, a large multidisciplinary team of scientists is sailing 200 miles west from Seattle into the northeastern Pacific Ocean with advanced underwater robotics and other instruments on a month-long campaign to investigate the secret lives of these plantlike organisms and the animals that eat them.

NASA and the National Science Foundation are funding the Export Processes in the Ocean from Remote Sensing (EXPORTS) oceanographic campaign. With more than 100 scientists and crew from nearly 30 research institutions, EXPORTS is the first coordinated multidisciplinary science campaign of its kind to study the pathways, fates and carbon cycle impacts of microscopic and other plankton using two research vessels, a range of underwater robotic platforms and satellite imagery.