May 29th, 2018
Climate Change May Lead to Bigger Atmospheric Rivers 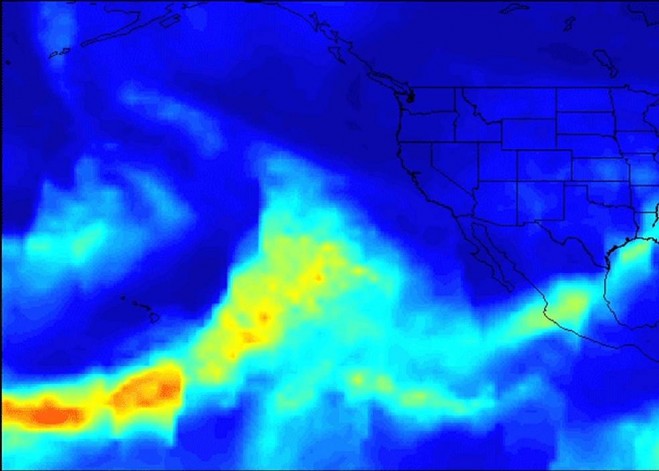 In early 2017, the Western United States experienced rain and flooding from a series of storms flowing to America on multiple streams of moist air, each individually known as an atmospheric river. (Credit: NASA/JPL-Caltech)

A new NASA-led study shows that climate change is likely to intensify extreme weather events known as atmospheric rivers across most of the globe by the end of this century, while slightly reducing their number.

“The results project that in a scenario where greenhouse gas emissions continue at the current rate, there will be about 10 percent fewer atmospheric rivers globally by the end of the 21st century,” said the study’s lead author, Duane Waliser, of NASA’s Jet Propulsion Laboratory in Pasadena, California. “However, because the findings project that the atmospheric rivers will be, on average, about 25 percent wider and longer, the global frequency of atmospheric river conditions—like heavy rain and strong winds—will actually increase by about 50 percent.”

The results also show that the frequency of the most intense atmospheric river storms is projected to nearly double.

Atmospheric rivers are long, narrow jets of air that carry huge amounts of water vapor from the tropics to Earth’s continents and polar regions. These “rivers in the sky” typically range from 250-375 miles (400-600 kilometers) wide and carry as much water—in the form of water vapor—as about 25 Mississippi Rivers. When an atmospheric river makes landfall, particularly against mountainous terrain (such as the Sierra Nevada and the Andes), it releases much of that water vapor in the form of rain or snow.

These storm systems are common—on average, there are about 11 present on Earth at any time. In many areas of the globe, they bring much-needed precipitation and are an important contribution to annual freshwater supplies. However, stronger atmospheric rivers—especially those that stall at landfall or that produce rain on top of snowpack—can cause disastrous flooding.