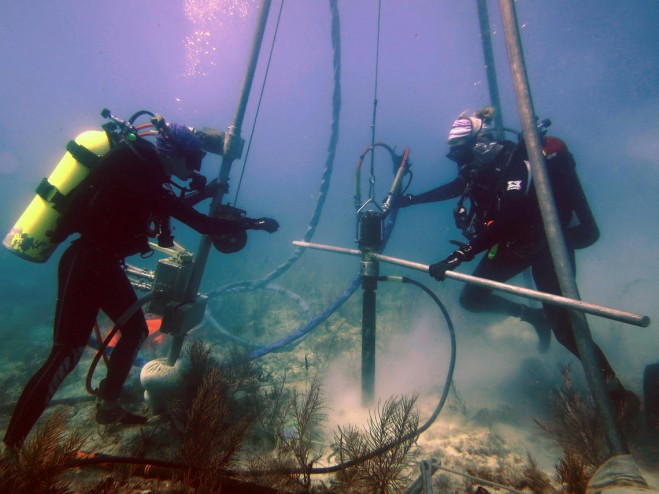 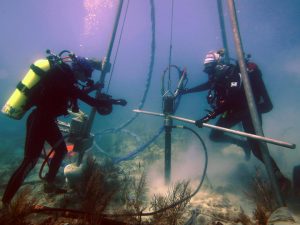 The Florida Keys coral reefs stopped growing or significantly slowed their growth at least 3,000 years ago and have been balanced between persistence and erosion ever since, according to a new study by the U.S. Geological Survey (USGS). The study, published in the journal Global Change Biology, also points to coral bleaching and disease outbreaks as signs that changing conditions may have recently tipped the 200-mile-long coral reef tract into a state of erosion.

USGS marine scientists based in St. Petersburg, Fla., analyzed 46 coral reef cores collected throughout the Keys, reconstructing the reefs’ growth from 8,000 years ago, when layers of living coral began building up on top of older bedrock, to the present day. Throughout that time, long-lasting climate cycles and associated changes in ocean temperatures have been the most-important factors controlling the growth of Florida’s reefs. A shift toward cooler water temperatures effectively ended the reefs’ development long before the visible declines in coral health and coral cover of the past few decades, the scientists reported.

“If you were to test a sample from the top layer of a typical Florida reef, you would most likely find that it’s between 3,000 and 6,000 years old,” said Lauren Toth, a USGS research oceanographer and the study’s lead author. “Florida’s reefs still had living corals after that time, they just weren’t building much new reef structure.”

The researchers examined reef core samples collected between 1976 and 2017 from Biscayne National Park in Miami-Dade County to Dry Tortugas National Park 70 miles from Key West. The scientists used radiocarbon dating—a standard technique for finding the ages of corals and other materials—and measured the amount the reef grew between the dates they had identified to create the first comprehensive reconstruction of coral reef growth along the entire Florida reef tract.

Corals can be killed by water that is hotter or colder than the narrow band of temperatures in which most species grow best, between about 65 and 85 degrees Fahrenheit. Most reefs are found in the tropics, but the Florida Keys reef tract is unique because it lies in subtropical waters.

About 5,000 years ago, a natural cooling cycle made the seas off Florida prone to winter cold snaps. In the colder conditions of the past few thousand years, the reefs became “geologically senescent,” meaning that reef growth was negligible and just a veneer of living coral remained, the study found. More than one-third of the reefs have not grown at all in the past 3,000 years, and the rest have not kept up with rising sea level.

Other factors, such as influxes of estuarine water from shallow Florida Bay, also stressed the Keys reefs, the researchers found. But they were likely not as important as the corals’ repeated exposure to cold water in winter.

Even after the Keys reefs stopped growing upward, they supported diverse communities of marine life, protected the island chain from storm waves and erosion, and provided other ecosystem functions for thousands of years. But in the last few decades, warmer water, coral diseases, bleaching and other stresses caused the reefs to begin eroding, the researchers said.

“For 3,000 years, Florida’s reefs have been balanced at a delicate tipping point. Although reefs were no longer growing, there was enough living coral to prevent them from eroding,” said Toth. “But with the dramatic declines in living coral in Florida and around the world in recent decades, we may now be on the verge of losing reef structures that took thousands of years to build.”