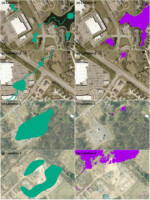 Phytoplankton May Be Abundant Under Antarctic Sea Ice

A decade ago, scientists on a NASA-sponsored ocean expedition found massive populations of phytoplankton blooming beneath sea ice in the Arctic Ocean. Now scientists using underwater instruments and a NASA satellite have found evidence of potentially significant blooms beneath the sea ice encircling Antarctica. The findings were recently published in the scientific journal Frontiers. Phytoplankton

By 2050, sea level along contiguous U.S. coastlines could rise as much as 12 inches (30 centimeters) above today’s waterline, according to researchers who analyzed nearly three decades of satellite observations. The results from the NASA Sea Level Change Team could help refine near-term projections for coastal communities that are bracing for increases in both

Ship tracks, the polluted marine clouds that trail ocean-crossing vessels, are a signature of modern trade. Like ghostly fingerprints, they trace shipping lanes around the globe, from the North Pacific to the Mediterranean Sea. But in 2020, satellite observations showed fewer of those pollution fingerprints. Drawing on nearly two decades of satellite imagery, researchers found

Two recently launched instruments designed and built at NASA’s Jet Propulsion Laboratory in Southern California to provide forecasters data on weather over the open ocean captured images of Hurricane Ian on Sept. 27, 2022, as the storm approached Cuba on its way north toward the U.S. mainland. COWVR (Compact Ocean Wind Vector Radiometer) and TEMPEST

If global warming persists, blue lakes worldwide are at risk of turning green-brown, according to a new study which presents the first global inventory of lake color. Shifts in lake water color can indicate a loss of ecosystem health. While substances such as algae and sediments can affect the color of lakes, the new study

In early September 2022, a long-lasting heat dome settled over the U.S. West and brought scorching temperatures that set all-time record highs. The extreme heat fueled wildfires and stressed the power grid before an eastern Pacific tropical storm moved into the region and broke the warm spell. On Sept. 7, 2022, more than 61 million

The second-largest reservoir in the United States now stands at its lowest level since it was filled in the mid-1960s. The view from above is sobering. Lake Powell, a key component of the western U.S. water system, is currently filled to just 26 percent of capacity, its lowest point since 1967. On August 22, 2022, 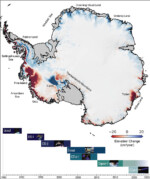 New research on Antarctica, including the first map of iceberg calving, doubles the previous estimates of loss from ice shelves and details how the continent is changing. The greatest uncertainty in forecasting global sea-level rise is how Antarctica’s ice loss will accelerate as the climate warms. Two studies published Aug. 10, 2022, and led by