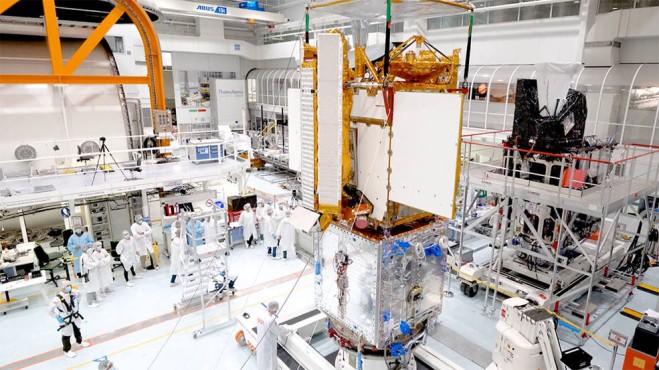 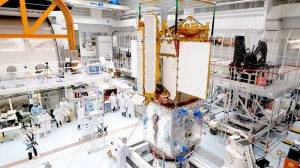 Engineers integrate separate parts of the SWOT satellite into one in a clean room facility in Cannes, France. (Credit: Thales Alenia Space)

SWOT is a collaboration between NASA and the French space agency Centre National d’Etudes Spatiales (CNES), with contributions from the Canadian Space Agency (CSA) and the United Kingdom Space Agency (UK Space Agency). The SUV-size satellite will collect data on the height of Earth’s salt- and fresh water—including oceans, lakes and rivers—enabling researchers to track the volume and location of water around the world.

SWOT will help measure the effects of climate change on the planet’s water, such as the processes by which small, swirling ocean currents absorb excess heat, moisture, and greenhouse gases like carbon dioxide from the atmosphere. The mission’s measurements will also aid in following how much water flows into and out of the planet’s lakes, rivers and reservoirs as well as regional shifts in sea level.