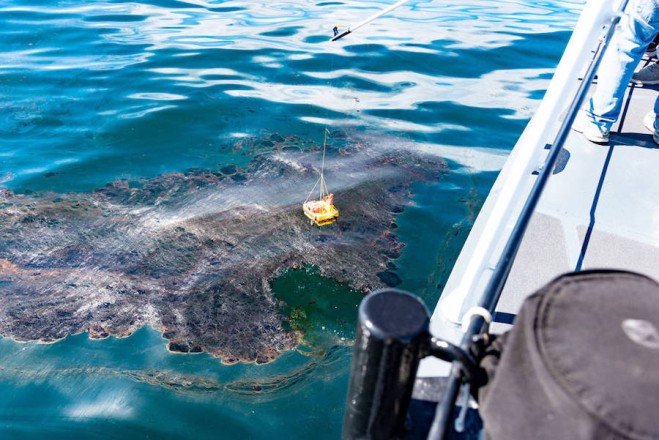 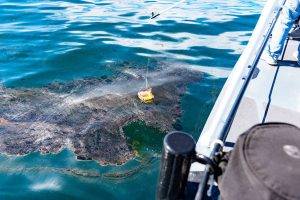 The Marine Oil Spill Thickness (MOST) project collects measurements of oil thickness in a naturally occurring oil seep off the coast of Santa Barbara, Calif. The measurements will be used to validate remote-sensing data measurements and eventually in a system to aid oil-spill response. (Credit: NOAA/Frank Monaldo)

NASA and National Oceanic and Atmospheric Administration (NOAA) scientists are teaming up to test remote-sensing technology for use in oil-spill response.

Just off the coast of Santa Barbara, Calif., thousands of gallons of oil seep through cracks in the seafloor and rise to the surface each day. But this isn’t a disaster zone: It’s one of the largest naturally occurring oil seeps in the world and is believed to have been active for thousands of years.

The reliability of these seeps makes the area an important natural laboratory for scientists, including those with the Marine Oil Spill Thickness (MOST) project, a collaboration between NASA and the National Oceanic and Atmospheric Administration (NOAA) to generate operational automated oil-spill detection, oil-extent geospatial mapping analytics, and oil-thickness characterization applications.

The MOST team is working to develop a way for NOAA—the lead federal agency for detecting and tracking coastal oil spills—to use remote-sensing data to determine not just where oil is, but where the thickest parts are, one of the critical missing pieces to direct response and remediation activities. The team recently concluded a fall field campaign in Santa Barbara.