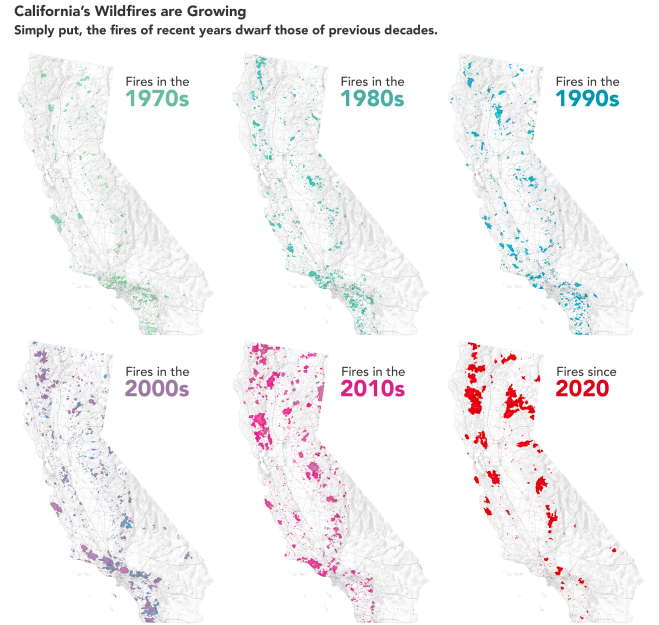 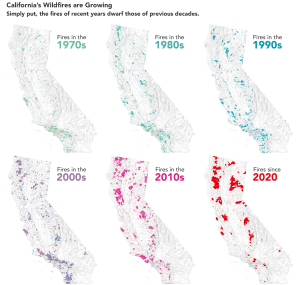 If it seems like enormous wildfires have been constantly raging in California in recent summers, it’s because they have. Eight of the state’s 10 largest fires on record—and 12 of the top 20—have happened within the last five years, according to the California Department of Forestry and Fire Protection (Cal Fire). Together, those 12 fires have burned about 4 percent of California’s total area—a Connecticut-sized amount of land.

Two recent incidents—the Dixie fire (2021) and the August fire complex (2020)—stand out for their size. Each of these burned nearly 1 million acres—an area larger than Rhode Island—as they raged for months in forests in Northern California. Several other large fires, as well as many smaller ones in densely populated areas, have proven catastrophic in terms of structures destroyed and lives lost. Thirteen of California’s 20 most destructive wildfires have occurred in the last five years; they collectively destroyed 40,000 homes, businesses and pieces of infrastructure.

The total area burned by fires each year and the average size of fires is up as well, according to Keith Weber, a remote sensing ecologist at Idaho State University and the principal investigator of the Historic Fires Database, a project of NASA’s Earth Science Applied Sciences program. The database shows that about 3 percent of the state’s land surfaces burned between 1970-1980; from 2010-2020 it was 11 percent. The shift toward larger fires is clear in the decadal maps of fire perimeter data from the National Interagency Fire Center.