The idea for biosensors — using some part of an organism to generate a signal to measure or monitor the presence of a substance — has been around for more than a century. The classic example is the use of canaries in coal mines to detect toxic gasses. Because these tiny birds are so sensitive to these gases that they would sicken long before the miners felt the effects, they served as a warning system.

Most modern biosensors are at the cutting edge of innovation, some using nanotechnology to detect substances in concentrations as small as a few parts per billion. Today, 85 percent of commercial biosensors are glucose sensors used by millions of diabetics to measure their blood sugar, according to Professor Anthony Turner, director of the Biosensors and Bioelectronics Centre at Linköping University, in Sweden. However, there are also many applications in such fields as safety, security, and environmental monitoring. For example, Portland International Airport, in Oregon, uses biosensors to monitor the effluent from its deicing facilities, before discharging it. While biosensors are very effective for certain applications, they are expensive to purchase and maintain. For many applications, industry is shifting to TOC (total organic carbon) meters.

Biosensors Explained
A biosensor is an analytical device for the detection of a substance that combines a biological component with a physical transducer. The biological sensing element can be an enzyme, a receptor antibody, or DNA. The transducer — which can be optical, physicochemical, piezoelectric, or electrochemical — produces an electrical signal proportional to the concentration of the substance being measured. In theory, any biological sensing element may be paired with any physical transducer. Associated signal processors display the results in a user-friendly way.

The small glucose strip used by diabetics, which plugs into their test meter, contains an enzyme called glucose oxidase, which changes the glucose in a drop of blood into a chemical that can be detected with electrical measurements. The test meter runs a small voltage through the sample and the amount of current that flows is directly proportional to the amount of glucose in the blood. The device is fast, accurate, easy to use, and inexpensive.

According to Dr. Kim Rogers, a research chemist with the Human Exposure and Atmospheric Sciences program of the U.S. Environmental Protection Agency, a few key differences between blood glucose meters and biosensors for environmental monitoring have made the former a huge commercial success while development of the latter has languished. Blood is a very simple and stable matrix, the parameters for acceptable blood glucose levels are clearly defined, diabetics are a clearly defined market, and the vast size of this market warrants large expenditures for research, development, and marketing. By contrast, environmental applications have to contend with extremely complex matrices, a huge number of substances and compounds of interest, a wide range of concentrations, and a very small market for each application. Therefore, he argues, nobody will spend millions of dollars to develop biosensors for environmental applications.

BOD Biosensors
One of the first environmental biosensors was a nerve gas detection device developed for the military in the late 1970s, says Turner. It was based on the enzyme acetylcholinesterase, which is involved in transmitting messages in the nervous system and produces an electrochemical reactive product. When nerve gasses are present they inhibit that enzyme and stop the production of the electrochemical signal. Essentially the same device and then various modifications of it were adapted for detecting various pesticides and pesticide contamination in the environment and with foods, he says.

There are toxicity sensors based on bioluminescence and manipulation of the lux genes of various organisms. Once you can genetically manipulate an organism so that it emits light in response to metabolism of a certain material, these bioluminescence assays can be used as toxicity tests and have been commercialized in various formats, Turner explains. Another common environmental biosensor is used to detect phenols. It uses enzymes such as polyethylene oxides, which will metabolize the phenols and produce a positive signal in response to the phenol contamination or inhibitory-based sensors that work somewhat like the nerve gas detectors.

The single commercially most successful environmental biosensor is the biochemical oxygen demand (BOD) sensor, which was invented in Japan, also in the late 1970s, says Turner. It uses immobilized microorganisms to measure the amount of assimilable carbon in waste waters. BOD, he points out, has been a measurement for over 100 years as a standard for stopping contamination of waterways. The standard method that is still enforced in legislation around the world dates back to about 1890 and the Royal Commission on Sewage in the U.K. and is now referred to as BOD5. It requires five days to do the analysis, by incubating microorganisms with the water sample and measuring the amounts of gasses that are released. To avoid both this delay and fines for polluting waterways, many companies and organizations rely on a BOD biosensor as an early warning system, to detect possible pollution incidents, and then, if they suspect that there is a problem, they perform a BOD5.

Use of a BOD Biosensor at an Airport
The Port of Portland, which operates Portland International Airport, uses biosensors to ensure that the $100 million conveyance, collection, storage, and treatment system for its deicing fluid complies with environmental laws and regulations. “We use them because, when we were first designing our system, we did not want to overbuild our infrastructure,” explains Susan Aha, the port’s Water Program Manager. “At that point, the only way to measure BOD was through the five-day test, which in reality is more like a 10- or 15-day test when you start to look at the lab turn-around.”

The chemicals used to deice planes create environmental concerns due to runoff and contamination. Photo courtesy of the Port of Portland

The port began to look for instruments that might measure BOD and selected one that mimics the lab process — the Isco-STIP BIOX meter. It tested the device in 2000, first used it operationally in the winter of 2003-2004, and now has 16 of them. The biosensor houses an established culture that is acclimated to the waste stream it monitors; therefore, it does not require the ramp-up time that the lab test does. “When the sample is fed in, you are already at the plateau, it is already reading, and so we do get really good correlation with lab BOD5,” says Aha. This instantaneous information enables the port to discharge its water in accordance to its permit, without having to hold it while waiting for the lab result.

“One thing we’ve discovered is that these instruments are extremely complicated to operate,” Aha points out, “because they are living systems, essentially, so they are very sensitive. In fact, each instrument has its own personality and our contractors actually give it a name. It’s usually a woman’s name. For example, Pump Station E is named Emma. They are so temperamental that we’ve really had to learn how to work with them.” Each device requires maintenance every two weeks during the seven month deicing season, costing a total of about $250,000 a year.

The airport uses the biosensors for both diversion and compliance. “The meters that we have around the terminal are for diversion,” says Aha. When the chemical deicers are applied to the planes, some of it falls onto the pavement and makes its way into storm inlets, where a pump and a tube pump it up to the biosensor. If the concentration is below a certain level, the system allows the water to flow directly into the storm system; above that concentration, it diverts it to a treatment plant. It is critical to make this decision very quickly, so the biosensors take readings every three seconds. “We can’t take it out once it goes into the stream,” Aha points out. At the treatment plant, before it is released to the outfall, the water is measured again, to determine whether it is in compliance with legal standards. Each drainage basin has at least one BOD meter and some drainage basins are so big that they have more than one; there are two at the treatment plant. The airport also has a spare instrument. However, Aha explains, it mostly addresses system failure through a fail-safe approach: if an instrument goes down, the program will automatically put the system into divert. 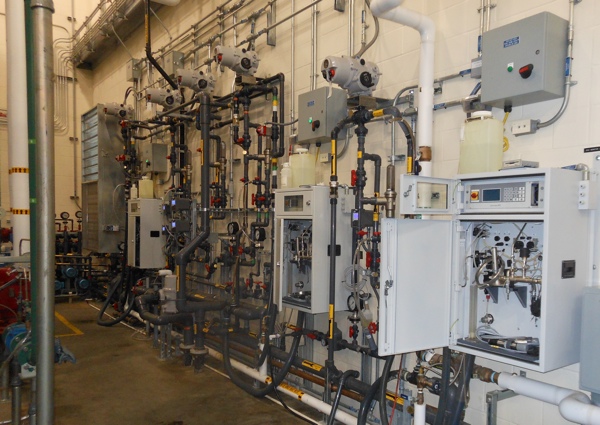 Many BOD biosensors are maintained to monitor deicing contamination at the Portland airport.

The instruments, which measure about 2 feet x 4 feet, contain the electronics and a glass cylinder connected to some tubes, through which a pump is constantly circulating the water. “Like every living thing, it needs phosphorous, nitrogen, potassium, etc.” says Aha. “Sometimes we have to supplement its diet, if our waste stream does not contain enough of the nutrients it needs. Early in the season, when we are not doing a lot of deicing, we might feed it. In the early days, we were experimenting with what it liked the best. We tried things like pear juice and Beck’s imported beer. People would see this beer sitting at our pump stations and think we were drinking it, but it was really for our instruments. If you think the instrument is not responding appropriately, if your readings look suspicious, you might have a reason to think it does not have proper nutrition. Sometimes an instrument will just be sick and we are not sure why the biology isn’t right. We always keep new biology in the freezer, so we can bring it in and get rid of the old stuff and start up new if we have to on a pretty short turn-around.”

To keep the devices calibrated, every two weeks a technician pulls a sample and sends it to the lab for verification. Additionally, oxygen probes have to be cleaned regularly. “We have a lot of problems with bio-fouling in tubes,” says Aha. “Those have to be replaced.”

TOC Meters
For their intended purpose, Portland International Airport’s BOD meters “have worked really, really well,” Aha reports. However, she points out, the industry appears to be now moving toward chemical-physical TOC meters, which analyze the organic carbon content in water or liquid solutions as a surrogate for detecting contamination from organic compounds — such as solvents, petrochemicals, or pesticides. While TOC analysis does not give specific information about the nature of the threat, identifying changes in TOC can be a good indicator of potential threats to a system. 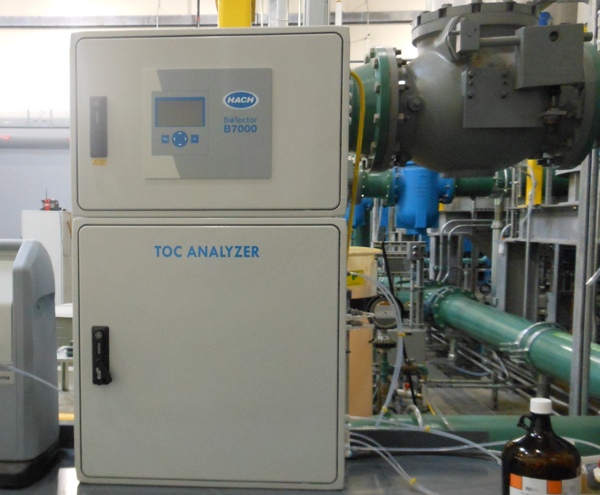 TOC analysis is a well-defined and commonly used method that measures the carbon content of dissolved and particulate organic matter present in water. TOC meters provide highly sensitive, non-specific readouts of all TOC through a three-stage process: first the inorganic carbon is removed, next the organic carbon is oxidized into CO2, and finally the amount of CO2 is measured. The primary differences between various on-line TOC analyzers are in the methods used for oxidation and CO2 quantification. Because TOC concentrations are simply surrogates that can indicate potential problems in a system, high levels of precision and the ability to distinguish specific organic fractions from a sample may not be required for detection of a potential chemical threat. It usually takes from 5 to 15 minutes to get a stable, accurate reading. On-line TOC analyzers are designed to operate in remote locations without continuous surveillance by an operator. However, to operate reliably, the instruments require regular calibration, inspection, and maintenance by technically skilled personnel.