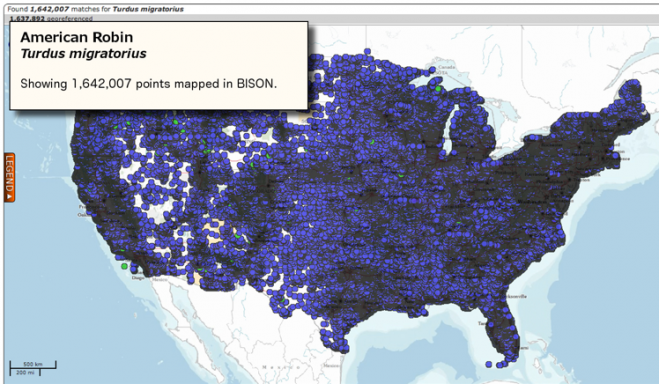 Biodiversity Information Serving Our Nation or BISON is the only system of its kind; a unique, web-based Federal resource for finding species in the U. S. and territories.  Its size is unprecedented, offering more than 100 million mapped records of nearly every living species nationwide and growing. And the vast majority of the records are specific locations, not just county or state records. 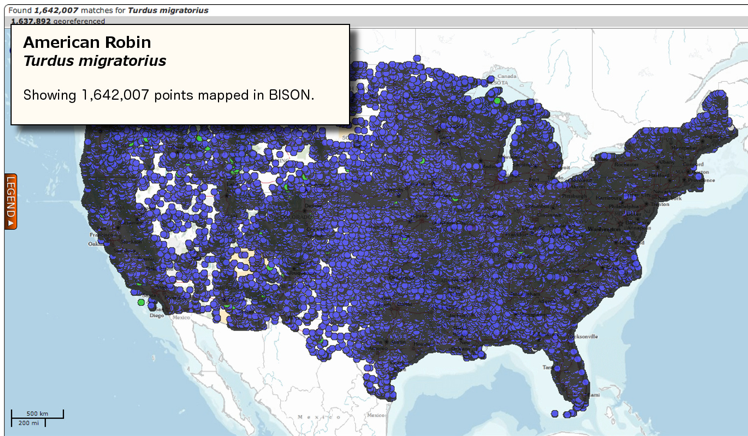 What’s more, BISON provides an “Area of Interest” search capability in which users can query by drawing the exact boundary around their area of interest, down to and including towns, villages, or even much smaller areas such as parks. For instance, New York City’s Central Park has more than 100,000 “species occurrences” recorded in BISON, with each species noted in detail. Other BISON search options include querying the species by scientific or common name, year range, state, county, basis of record, or provider institution.

As for the results, BISON displays them in both an interactive map and a list format. Users can click on each species occurrence point to retrieve more information, such as the institution providing the data, the collector, the date collected, and whether it was from a collection or an observation.  Further, occurrences can be dynamically visualized with more than 50 other layers of environmental information in the system. Extensive web services are also available for direct connections to other systems.

“The USGS is proud to announce this monumental resource”, said Kevin Gallagher, Associate Director, Core Science Systems,” and this is a testament to the power of combining the efforts of  hundreds of thousands of professional and citizen scientists into a resource that uses Big Data and Open Data principles to deliver biodiversity information for sustaining the Nation’s environmental capital”.

“BISON is destined to become an indispensable toolkit to manage species occurrence data to support scientific, educational, and policy-making activities in the US”, Dr. Erick Mata, Executive Director of the Encyclopedia of Life explained.  “This is highly complementary and synergistic with EOL’s efforts to raise awareness and understanding of living nature.”

“With BISON, the USGS takes a big step toward making biodiversity data held within Federal agencies easier to find and use”, added Mary Klein, President & CEO of NatureServe. “I am enthusiastic about future opportunities to work with USGS to increase collaboration among Federal, state and private data holders.”

Land managers, for instance, might be looking for a piece of land to purchase for conservation—but first they want to know what species have been documented for that parcel. BISON will tell them after only a few mouse clicks.

BISON serves as the U.S. Node of the Global Biodiversity Information Facility (GBIF) and will form an integral part of EcoINFORMA, the information delivery strategy in “Sustaining Environmental Capital: Protecting Society and the Economy,” a recent report by the President’s Council of Advisors on Science and Technology (PCAST).

“BISON responds directly to a key need PCAST pointed out in ‘Sustaining Environmental Capital’ – to make Federal environmental data available, inter-operable, and usable to the public,” said PCAST member Rosina Bierbaum, “We look forward to this ‘biodiversity’ hub being supplemented by complementary ecological data hubs by other Federal partners, to further the goal of helping communities across the Nation make increasingly wise planning and management decisions.”

BISON already includes millions of points from the Federal investment in biodiversity research. It is formally cooperating with other Federal agencies to greatly expand the delivery of federally funded biodiversity data for the greatest possible good. Hundreds of thousands of citizen and professional scientists have collected the data in BISON. Non-governmental organizations, state and local governments, universities, and many others are also participating in this enormous undertaking.

The USGS has built and maintains BISON, which is hosted on the massive Federal computing infrastructure at Oak Ridge National Laboratory.

To learn more, visit: http://bison.usgs.ornl.gov or contact the USGS BISON Team at BISON@usgs.gov.

The USGS Core Science Analytics and Synthesis program within Core Science Systems is home to BISON and focuses on innovative ways to manage and deliver scientific data and information. The program implements and promotes standards and best practices to enable efficient, data-driven science for decision-making that supports a rapid response to emerging natural resource issues. One of the ways this is accomplished is by developing national data products that increase our understanding of the Earth’s natural systems.