Senior politicians do not always appreciate the value of Geographic Information and Location Intelligence. With their minds now sharply focused on boundary changes for the UK Parliament, nothing brings home the importance of spatial analysis as clearly as the threat of losing some seats. In this article Jamie Justham, Chairman of Dotted Eyes, one of the UK’s leading GIS development houses, summarises how the recent and proposed legislation is being put into practice and its likely consequences.

New boundaries for the next General Election 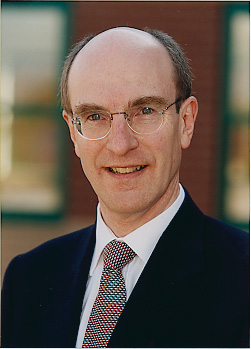 Jamie Justham – Chairman, Dotted EyesPlans to reduce the number of Members of Parliament (MPs) from 650 to 600 in the next UK    General Election continue to attract controversy.

Proposals for new constituency boundaries in England, Scotland and Wales are currently being debated in a series of public hearings. The UK picture will be completed when the Boundary Commission for Wales publishes its Initial Proposals, which are expected in January 2012.

These changes all spring from the Parliamentary Voting System and Constituencies Act 2011, which became law on 16th February 2011. This set up the referendum on Alternative Voting and also – in just 10 pages out of 314 in the Act – defined the rules to be used when the four Boundary Commissions for the various parts of the UK define the new constituency boundaries.

There are four protected seats, with fewer voters than all the others – Na h-Eileanan an Iar (Western Isles) and the Orkney and Shetland Isles, plus two in the Isle of Wight. The other 596 seats in the reformed Parliament must each have an electorate within the very tight tolerance of 5% either side of the national average. The permissible range is therefore between 72,810 and 80,743 voters. This is based not on the total population but on the register of electors on the nominal date of 1st December 2010, and it makes no adjustment for under-registration.

A further legal constraint is that no constituency may be larger than 13,000 square kilometres. This caused the Boundary Commission for Scotland to trace a new boundary which partially follows the watershed at the top of the range of hills south of Loch Torridon. That ensures that the Caithness, Sutherland, Ross and Cromarty County Constituency falls just within the size limit.

Upheaval expected from new rules
Widespread upheaval is expected to result from applying these rules. Only 39% of the current UK constituencies have an electorate within the range that is now required. At least 87% of the UK boundaries are likely to change. In the Initial Proposals published so far, covering 610 seats, only 82 survived unscathed, and 11 of those have been given new names! In Wales, where Initial Proposals are still awaited, no fewer than 97.5% of boundaries will have to be redrawn. This is because only one of the existing 40 seats has an electorate large enough to fall within the required range – Cardiff South and Penarth with 73,607 voters.

There is a further political dimension in Wales, where the current 40 Westminster MP constituencies also return an Assembly Member (AM) to Cardiff Bay. These sit alongside the 20 AMs elected by proportional representation for the five regions in Wales. The 2011 Act separates the implementation of new boundaries for the Assembly away from those for Parliament. However, the Welsh Labour Party has recently made clear its position that whatever boundary change is enacted for the UK should not automatically apply in Wales.

Once the Initial Proposals have been published, the Boundary Commissions embark on a 12 week period of consultation, in which anyone can submit written evidence. During this time two-day public hearings are held – between two and five each in Wales, Scotland and all nine regions of England. All representations, both written and oral, are then published for four weeks of scrutiny when the parties will no doubt be commenting on each others’ comments. Then the Boundary Commissions will publish revised proposals for a further period of eight weeks consultation, leading to their Final Reports.

The independent Commissions can take into account the local government boundaries as at 6th May 2010 and the existing parliamentary boundaries, as well as the size, shape and accessibility of each constituency and any local ties that would be broken. They must not be influenced by any political considerations. Whilst the political parties are keen to try and maximise the number of seats they expect to be able to win they must express evidence for revisions in their counter proposals without suggesting any political bias. They have been known to stretch the point. For example by observing that separate suburban areas are linked by common fund-raising offices for charities such as the Cats Protection League!

Proposed changes represented visually with Cartochart
One innovative way to visualise the proposed changes is by means of a Cartochart™. This is a variation on the concept of a cartogram, in which the areas occupied by all the constituencies are made identical. A hexagonal grid is typically used, with one cell for each MP, on the basis that every MP has one vote in the House of Commons. The spatial relationships between seats are preserved as far as possible. As illustrated below, this means they can be grouped into the regions which are used for elections to the European parliament.

The distinctive difference in converting a cartogram into a Cartochart is that the size of the ‘blob’ portraying each seat is varied according to its electorate. 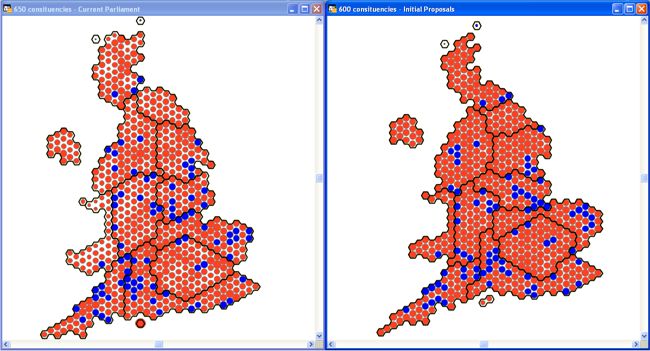 Cartocharts
The illustration compares the current 650 constituencies on the left against the proposed 600 on the right. White space between the blobs highlights seats that have a relatively small electorate. On the right only the four protected constituencies have any significant amount of white space around them. The colours have no political significance here – instead blue indicates an unchanged boundary while red means some change. Both Cartocharts show the same 83 constituencies in blue. Some may appear to have moved a little and this is because when the 50 constituencies were removed the blobs have been re-arranged slightly.

For each constituency the relevant Boundary Commission not only has to define the boundary but also to recommend its name and designation. The designations are either County Constituency or Borough (Burgh in Scotland) Constituency. The key difference between the two is that political candidates have a slightly higher limit per capita for their election expenses in a County Constituency because it’s thought to cost more to reach all the voters.

The official distinction seems to be that a County seat has ‘more than a small rural element’ – hardly a rigorous definition. In Scotland and Northern Ireland there’s a clear dividing line between the two designations at an area of 100 square kilometres. In England the transition is much less well-defined, with several County Constituencies having a smaller area than Borough Constituencies and vice versa.

Proposals to replace Household Registration with Individual Electorate Registration
At the same time as the boundaries review, the Government has been running a public consultation on Individual Electoral Registration. This follows the publication of a White Paper in June 2011. In Great Britain at present, the Electoral Registration Officer in every council sends an annual ‘canvass’ (form) to each household. The whole registration process does rely largely on trust, though there is the threat of a fine for not registering or for supplying false information. Councils are accustomed to working with households – or at least with properties – as the street naming and numbering authorities and LLPG custodians, as well as through administering council tax, planning, refuse collection and so on.

The draft legislation proposes a switch in 2014 from household-based registration to individual registration. Councils are much less accustomed to dealing with individual people. The registration process would mean everyone would need to provide their National Insurance number as well as their date of birth as a means of personal identification.

The White Paper envisages that registering would be entirely voluntary, with any threat of fines removed, and that there would no longer be a full canvass every year, but instead just every ten years. Following the consultation, though, it is likely these aspects will be removed from the resulting legislation. No doubt part of the reason is the experience of Northern Ireland, which adopted Individual Electoral Registration in 2002 and encountered an immediate fall of about 10% in the number of people registered to vote. The personal identification rule was then relaxed in order to help reduce the level of under-registration.

There is an essential connection between the boundary review and the registration process. The constituency boundaries for the 2015 General Election use the range of permissible electorates based on Household Electoral Registration, whereas those for the 2020 General Election will use a different range of electorates based upon Individual Electoral Registration. Any additional under-registration arising from the new system may well lead directly to a further substantial change in boundaries in the five years between the elections.

Dotted Eyes publish BoundaryMap to demonstrate Initial Proposals
Under the Open Government Licence, Dotted Eyes has used the published information to produce an Open Data product called BoundaryMap™ for all parts of the UK. This digital data set can be downloaded free of charge from www.dottedeyes.com/boundarymap as vector files in shape and tab format, as well as KML data.

BoundaryMap currently includes the Initial Proposals for England, Scotland and Northern Ireland, which will be joined by Wales once its proposals are published. It also gives the number of square kilometres for each proposed constituency and a flag indicating whether its boundary has changed, along with a count of the number of councils overlapped.