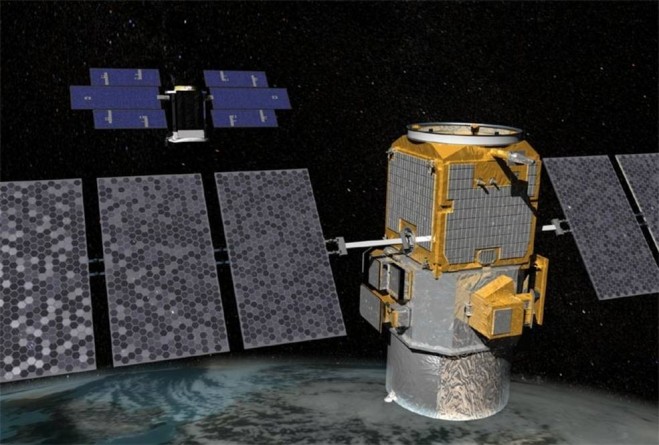 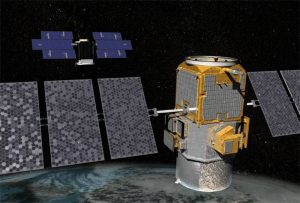 In February 2018, facing a mechanical challenge, CloudSat (pictured in background) had to exit the A-Train of Earth-orbiting satellites and move to a lower orbit. Following an exit maneuver of its own in September 2018, CALIPSO (foreground) joined CloudSat, forming what NASA scientists are calling the C-Train. (Credit: NASA)

CloudSat and CALIPSO, designed to complement each other in the 1990s, were launched together on the same rocket in 2006. Then they spent more than 10 years orbiting Earth in formation with a coterie of other satellites in what’s known as the A-Train (afternoon constellation).

Flying together enables the A Train satellites to gather diverse measurements of the Earth below at nearly the same time as they circle the globe pole-to-pole. The nearly simultaneous observations allow scientists to build a more sophisticated understanding of the Earth system than would be possible if the measurements were separated. Other members of the A Train include NASA’s Aqua, Orbiting Carbon Observatory-2 and Aura spacecraft, along with the Japan Aerospace Exploration Agency’s Global Change Observation Mission – Water (GCOM-W1) satellite.

In February 2018, facing a mechanical challenge, CloudSat had to exit the A-Train, moving to a lower orbit—leaving CALIPSO behind and the future of their partnership uncertain. But following a recent exit maneuver of its own in September 2018, CALIPSO rejoined CloudSat. NASA scientists are referring to the new orbit, just a few miles below the A-train, as the C-Train—C being the first letter of each satellite.