March 24th, 2020
Shedding Light on How Much Carbon Tropical Forests Can Absorb 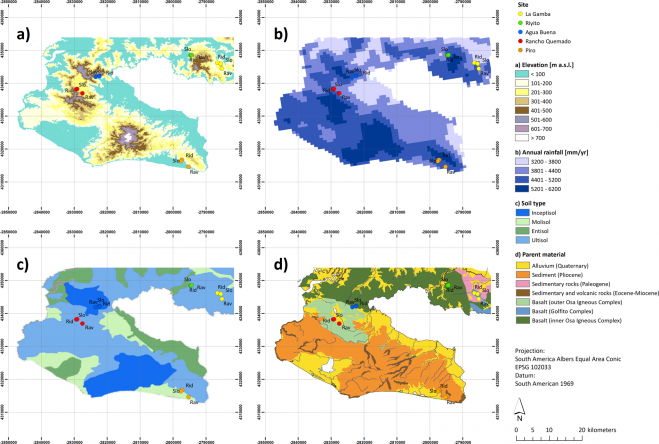 Tropical forest ecosystems are an important part of the global carbon cycle as they take up and store large amounts of carbon dioxide. It is uncertain, however, how much these forests’ ability to take up and store carbon differ between forests with high vs. low species richness. New International Institute for Applied Systems Analysis (IIASA) research sheds light on this question, aiming to enhance our ability to predict tropical ecosystems’ strength as global carbon sinks.

The authors of the new study published in Scientific Reports investigated how many species are needed for tropical ecosystem functioning and associated ecosystem services, including carbon sequestration, to project future changes in the climate that affect ecosystem carbon storage and thus might trigger further climatic change through increased greenhouse gas emissions. It is important that we are able to construct realistic scenarios of how tropical ecosystems function to help improve current conservation and management strategies, so they can continue to provide their valuable services into the future.

According to the researchers, it is generally assumed that more-diverse communities capture the available resources more efficiently due to niche complementarity and preferences of certain species to specific conditions. The results show that abiotic and biotic factors in fact interact with one another to determine how much carbon can be stored by the ecosystem based on the availability of other resources like water and nutrients. This indicates that multiple and interrelated factors would need to be accounted for to arrive at plausible projections of future ecosystem carbon sink strength.

An analysis based on statistical path modeling revealed that apart from climatic factors, such as temperature and rainfall, factors like soil texture and chemistry were important controls when it comes to tropical plant community composition as they affect the resource availability of water and nutrients.

In this regard, the study specifically looked at differences between trees, palms, and lianas (long-stemmed, woody vines that use trees and other plants to climb up to the canopy). Each of these groups differ in terms of the amount of carbon they are able to store due to differences in their ecological strategy. Lianas are, for instance, relatively fast growing and try to reach the canopy to get to the sunlight, but do not store as much carbon as a tree stem to reach the same height in the canopy. Palms in turn mostly stay in the understory. The analysis further showed that palms were more abundant on soils with high bulk density and low soil phosphorus availability, while certain tree species were found on relatively less dense soils with high soil water availability leading to differences in plant community composition across the landscape. In addition, sites with less resources contained less diverse plant communities than those with ample soil water and nutrient supply.