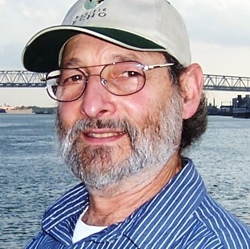 GIS professionals familiar with the National Spatial Data Infrastructure’s seven Framework Data Layers know that these are just the beginning of a multitude of layers and themes compiled to build effective GIS databases.  Many states have plans for additional statewide framework layers to supplement the Federal NSDI.  California has prioritized eleven.  These map-data layers are collected and maintained by separate agencies, at different times and with different degrees of accuracy and resolution.  How can they be aligned, and kept in alignment, so that coincident boundaries on disparate themes actually share the same locational coordinates?

If GIS data layers were slices in a Dagwood sandwich, they’d be held together with toothpicks.  What are the toothpicks that can hold a multi-layer GIS database together? Surveyors reference their measurement of object locations to the national, or their state’s, spatial reference network – a coordinate-system grid that is aligned with geodetic control points of “known” coordinate values.  Any local “observation” to determine the coordinates of an object on the ground references its distance to one or more Spatial Reference Network (SRN) control points.  In California, for example, the state-legislated SRN is called the California Spatial Reference Network (CSRN).  Any local observation collected in California must be referenced to the NSRS or to the CSRN to be legally registered to the California Coordinate System of 1983 (CCS83).

California has a network throughout the state of 830 continuously operating GPS stations that constantly record and archive their coordinates, as determined by GPS satellite signal measurement.  Each station’s observation of its locational coordinates (one every second) differs slightly, because of atmospheric disruption of the GPS signals, but long-period averages and statistical balancing throughout the network of stations make these points the best references for known locations from which local positions are determined. If one uses a single GPS receiver to obtain the coordinates of a particular object or boundary point on the ground, each second’s observation will be different.  The average accuracy will be no better than 3 to 5 meters.  However, when adjusting the observed coordinates with the simultaneous observation of a GPS receiver on a known reference point, accuracy can be improved to 1 to 2 cm.

Federally managed stations are called Continuously Operating Reference Stations (CORS). Non-federally managed stations are called Continuous GPS Stations (CGPS). The data and metadata logged by each CORS/CGPS control station are publically available for download, to be used for correcting local GPS observations.  Since California sits on tectonic plates that are moving 4 to 10 cm per year, and also because some land is subsiding due to water or oil extraction, so-called “passive” geodetic monuments (brass caps firmly mounted in the ground) do not provide adequate reference; their published coordinates get more inaccurate with every passing day. There are several ways to determine the coordinates of an object on the ground using GPS. To achieve highest accuracy and reliability, the RTN control stations should be no more than 70 kilometers from a rover’s location.  Some parts of California are sparsely covered with CRTN control.  In some areas, private companies have established their own, uncertified control networks.

In addition to enabling high accuracy for GPS determination of locational coordinates, and for providing the opportunity to tie those coordinates to an official reference system, the CGPS stations enable continuous scientific observation of ground movement and earthquakes.  In fact, nearly 3/4 of the CGPS stations in California are maintained by the Plate Boundary Observatory (PBO) project, funded by the National Science Foundation.  The West Coast from California to Alaska has an amazing CGPS infrastructure that can warn utility companies ahead of an earthquake and can enable surveyors to map objects and terrain for accurate and consistent registration in GIS databases. It’s too bad that all this is going away.

Yes, PBO funding is scheduled to expire in 2018, and a gradual shutdown of CGPS stations is planned to start soon. Funding for California’s remaining CGPS stations, and their ongoing stewardship by the California Spatial Reference Center (CSRC), had been coming from the U.S. National Geodetic Survey, until Federal support dropped to zero in 2011. As CSRN steward, the CSRC has been maintaining the database that archives all the CGPS observations, and it has been distributing the data to surveyors seeking correction adjustments, along with software to enable the adjustments.  Since Federal funding ceased, the CSRC has barely subsisted on donations from users and contributions from the University of California’s “Scripps Orbit and Permanent Array Center” which researches geophysical science using GPS.  GIS professionals as well as surveyors and California’s citizens are in danger of losing this valuable infrastructure that is necessary to control land surveys, align our geographic databases, and provide early warning of seismic events. When confronting problems that require public policy solutions, concerned professionals find allies; they study the situation; and they act!  And so, thirteen surveyors, geodesists, photogrammetrists and GIS pros formed the “California Geodetic Control Work Group,” sanctioned by the California GIS Council, to propose methods for improving, operating, maintaining, and funding California’s Spatial Reference Network.  The group is developing its recommendations and presenting them to selected professional groups for feedback.  If the CGCWG committee’s work succeeds, California’s spatial data professionals will be able to continue using the infrastructure necessary to map locations accurately and to coherently register them in GIS databases.

How can GIS professionals participate?  GIS pros need to assure that their agencies’ RFP specifications for aerial photography, remote sensing, and GPS-measured mapping require that the data be referenced to official Spatial Reference Networks, and that the data contains appropriate metadata that includes collection date, reference datum, epoch, and adjustment method used, and calculated accuracy.  We need more geodetic control points in our GIS databases to act like toothpicks in the sandwich, keeping thematic layers aligned. And, we’ll need to develop some best professional practices to align those slippery layers.