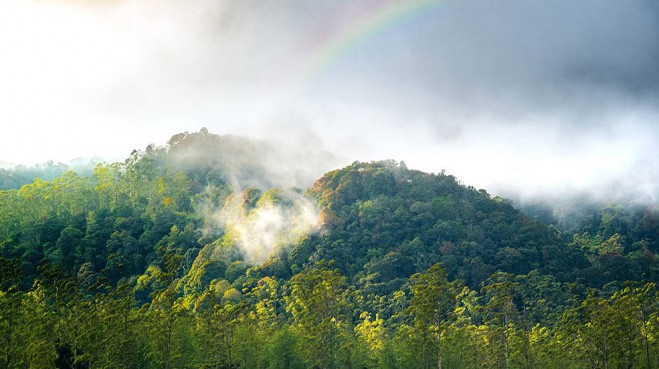 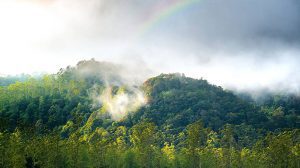 This image shows a forest giving off moisture into the air, or transpiring. When combined with moisture that evaporates from the land, both processes drive evapotranspiration, a key branch of the water cycle. As the climate warms, these processes are expected to intensify. (Credit: © Acarapi / Adobe Stock)

The rate at which plants and the land surface release moisture into the air has increased on a global scale between 2003 and 2019. These processes are collectively known as evapotranspiration, and a new NASA study has calculated its increase by using observations from gravity satellites.

By gauging the mass change of water between the oceans and the continents, the researchers determined that evapotranspiration’s rate of increase is up to two times higher than previous estimates. This is important because evapotranspiration represents a critical branch of the global water cycle that creates the conditions for life on land.

While it is known that a warming climate should increase the rate of evapotranspiration, accurate global measurements have, until now, been elusive. To get a global estimate of how evapotranspiration is changing, researchers found a new way to leverage data collected by the pair of Gravity Recovery and Climate Experiment (GRACE) satellites that operated from 2002 to 2017, and the successor pair, GRACE Follow-On, that launched in 2018.

Because water has mass and therefore contributes to the Earth’s gravity signal, these spacecraft are exquisitely sensitive to the movement of water around the world, from tracking changes in ice sheets to water stored on land to variations in ocean mass. Seeing an opportunity, the researchers studied the 17-year dataset from GRACE and GRACE-FO to see if it was possible to tease out the gravitational signal associated with the movement of water by evapotranspiration.

By subtracting all the water mass outputs from the inputs over land and then calculating the residual mass of water, the researchers were able to estimate the rate of evapotranspiration. They did this by subtracting independent estimates of global river discharge (in other words, the rate of water flowing through rivers to the ocean) and GRACE and GRACE-FO satellite data (that reveal the local changes in water mass on and in the ground) from global precipitation measurements to find out the mass of water being lost to the atmosphere.