For the past 10 years, many GIS users throughout the Oregon State GIS community have utilized imagery datasets for their mapping needs. For statewide imagery coverage of any reasonable resolution this has required the arduous task of moving the data set via CD/DVD, portable hard disks as well as through the use of FTP sites.  With imagery needs growing exponentially, distributing dataset via this method was creating a storage and distribution nightmare. 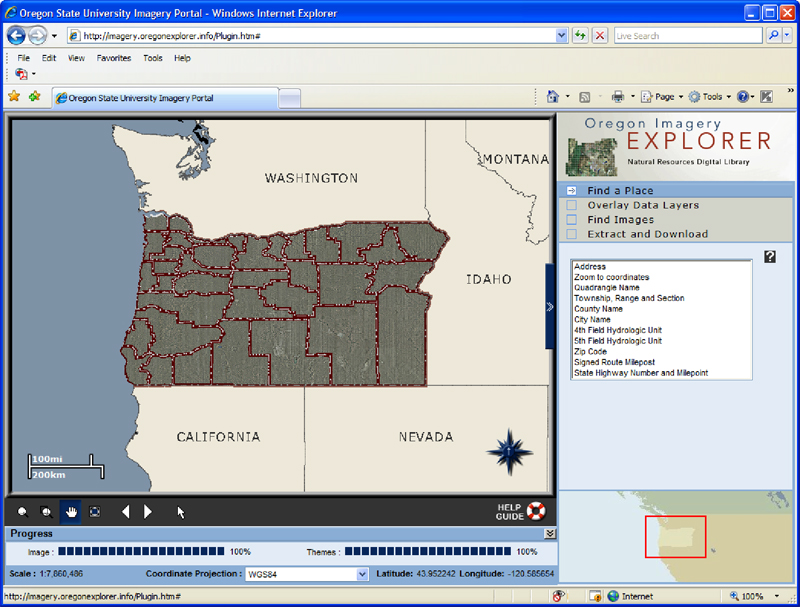 Oregon realized the need for a more efficient distribution mechanism where users acquire digital datasets via a Web-based library/portal system. Such systems have been in use for years to deliver Landsat7 satellite imagery to federal consortium members of the Multi-Resolution Land Characteristics Consortium (http://www.mrlc.gov).

With the acquisition of the 2005 National Agriculture Imagery Program (NAIP) imagery for the entire state of Oregon at half-meter and one-meter resolutions, the state realized that disseminating this data manually would create an inefficient data distribution scenario. In late 2006 the Oregon Orthoimagery Framework Implementation Team (OFIT) directed the State of Oregon to contract with Oregon State University to create an imagery distribution/provisioning web portal that could be integrated with the current Oregon Explorer Natural Resource digital library portal.

The primary goal of this portal is to provide datasets to federal, state, and local agencies and institutions of higher education, by allowing users to select an area of interest and then extract/download the data in the appropriate format and projection to the client’s site. The portal also serves as a tool for ingesting and storing imagery files via a library, as well as providing a service to those clients with applications that can access imagery via a WMS service (like ESRI’s ArcGIS, Google Earth, and many others).

ER Mapper (now part of Leica Geosystems Geospatial Imaging) was awarded the contract to create the system and began work in early 2007. The heart of the portal is ER Mapper’s Image Web Server, which allows for the storage of terabytes of data that can be served to web clients. Along with this a web based Image Integration Framework that provides the user interface, the Image Extraction Engine to extract image subsets, and an Image Catalog component to load metadata into a database.

The vector overlays are provided by an Oregon ArcIMS service, as are the “Find A Place” searches, with the exception of the address search, which is provided by the Google Geocoder. The Overview window is provided by WMS service using ArcIMS via the WMS Connector.

The user interface (built using the ER Mapper Image Integration Framework) manages the services independently (asynchronously), so that data is displayed as soon as it is available – it is not necessary to wait for all the services to respond before starting to see the results. This is handy when there are multiple services that have different response times. It also means that if one service is down, the rest of the portal still functions.

Upon entering the site the user will find a table of contents where they can utilize the following interfaces: find a place, overlay data layers, find images and then extract and download imagery datasets. Also included is an overview map to track the users current location in the state. 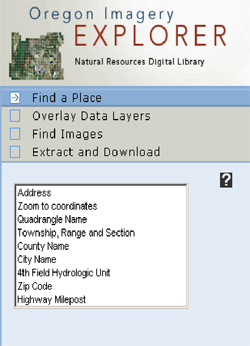 A key component of the provisioning feature of the Portal is the ability for the user to define a clip region over the image mosaic and have this section of the image ‘cut out’ and packaged for download. The user performs spatial discovery operations on the imagery using a combination of search operations via the ‘Find a Place’ panel and then manual positioning using the pan, zoom and zoom box tools. Once a view into the imagery is identified the user has the choice of extracting an image component based on the bounding box of the viewing window or drawing a clip region with the mouse to define the bounding box for the extraction.

To make image downloads as efficient for the user as possible a number of processing options have been provided to tailor the imagery extracts to their needs. This includes selection of the format, current choices being ECW, JPEG 2000, GeoTIFF and JPEG. The user can specify the desired image quality (where supported by the format), which determines the compression level for the output file. The user can also select the projection for the output image from a list of ten different projection options. By adjusting the Rows and Columns desired for the image extracted the user controls the resolution of the resultant image file. These processing options assure that when the data is received it can be used immediately in the user’s application.

Prior to submitting the extraction order the user is presented with a form reflecting the key elements of the order. This details the image name and the processing options, including the format and projection selected. Given that image extractions can be large in size the user is provided with an estimate of the final output file size and a guide as to the download time for a range of connection speeds.

Once the order is submitted to the Image Extraction Engine it is prioritized by the provisioning system, which manages any number of simultaneous orders from the users. The system maintains two separate queues, a priority queue for smaller jobs and a batch queue for larger extractions.

Jobs that are smaller than 100 megabytes (configurable by administrator) are placed into the ‘Priority Queue’, which can be monitored directly via a web page. Jobs in excess of the 100 Mbyte cutoff limits must be confirmed from an email link, which is sent to the user’s designated email address. Once confirmed these jobs are entered into the ‘Batch’ queue.

When imagery is loaded, an XML file containing FGDC standard metadata must also accompany it. This metadata is captured for each image and stored in the metadata database. Images are delivered with “world” metadata file, the “ERS” metadata file, and the FGDC metadata files in both xml and html formats.

Options for Desktop and Web Use

One of the ways to get imagery is to use the portal to extract and download an area of interest. However, it is also possible to directly access imagery from the server using one or both of the WMS or ECWP protocols. The WMS protocol is natively supported in a wide range of desktop applications include ArcGIS, MapInfo, Google Earth and others. The ECWP protocol is also supported via plugins in a wide range of desktop applications including ArcGIS, MapInfo, ER Mapper, and others. The ECWP protocol provides streaming imagery, which results in a faster, smoother user experience. The plug-ins are free in most cases and are available from the ER Mapper website. 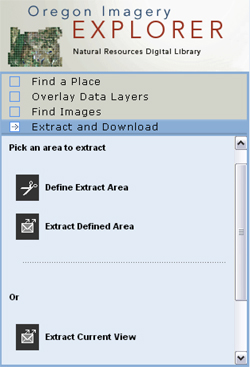 Members of the Oregon GIS community that already have existing interactive mapping websites can take advantage of the statewide imagery served by the Image Web Server.  Direct ECWP support is available in ArcIMS clients via an Active X Plug-in and in Arc Designer websites using an integration tool called I – Wizard. With the addition of an ImageX or WMS image layer, ArcIMS websites can use IWS served imagery without the need for an additional Plug-in.

There are many choices on how a user can access data via the Oregon Imagery Explorer. The results and the benefits of the portal have been positive for the GIS community. Users are no longer burdened with storing or maintaining duplicate data sets throughout the community. Furthermore the user no longer needs to worry about the processing capabilities and image manipulation times that are typically encountered.