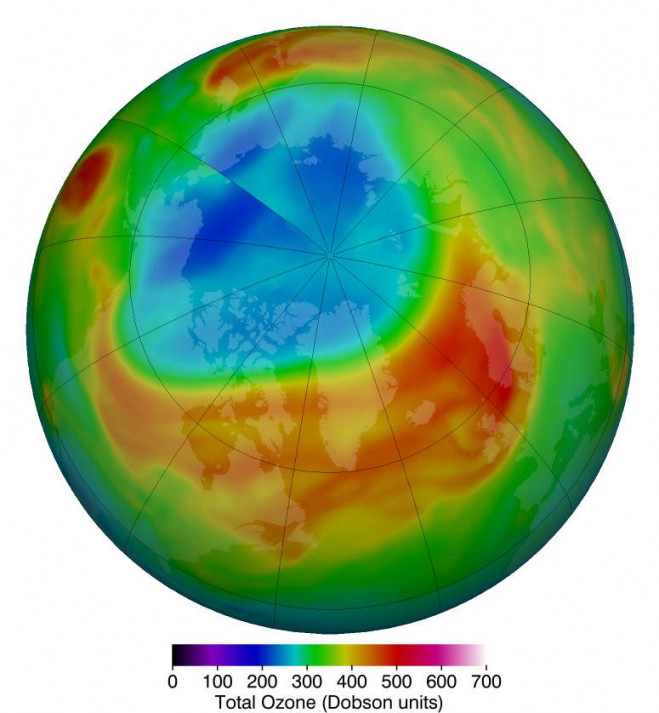 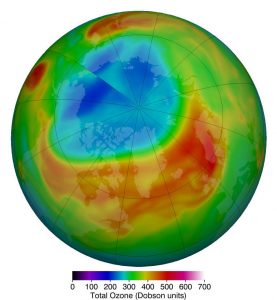 Ozone levels above the Arctic reached a record low for March, NASA researchers report. An analysis of satellite observations show that ozone levels reached their lowest point on March 12, 2020, at 205 Dobson units.

Although such low levels are rare, they are not unprecedented. Similar low ozone levels occurred in the upper atmosphere, or stratosphere, in 1997 and 2011. In comparison, the lowest March ozone value observed in the Arctic is usually around 240 Dobson units.

“This year’s low Arctic ozone happens about once per decade,” said Paul Newman, chief scientist for Earth Sciences at NASA’s Goddard Space Flight Center in Greenbelt, Md. “For the overall health of the ozone layer, this is concerning since Arctic ozone levels are typically high during March and April.”

Ozone is a highly reactive molecule comprised of three oxygen atoms that occurs naturally in small amounts. The stratospheric ozone layer, roughly 7 to 25 miles above Earth’s surface, is a sunscreen, absorbing harmful ultraviolet radiation that can damage plants and animals, and affecting people by causing cataracts, skin cancer and suppressed immune systems.

The March Arctic ozone depletion was caused by a combination of factors that arose due to unusually weak upper atmospheric “wave” events from December through March. These waves drive movements of air through the upper atmosphere akin to weather systems that we experience in the lower atmosphere, but much bigger in scale.

In a typical year, these waves travel upward from the mid-latitude lower atmosphere to disrupt the circumpolar winds that swirl around the Arctic. When they disrupt the polar winds, they do two things. First, they bring with them ozone from other parts of the stratosphere, replenishing the reservoir over the Arctic.

The mixing has a second effect, which is to warm the Arctic air. The warmer temperatures then make conditions unfavorable for the formation of polar stratospheric clouds. These clouds enable the release of chlorine for ozone-depleting reactions. Ozone-depleting chlorine and bromine come from chlorofluorocarbons and halons, the chemically active forms of chlorine and bromine derived from man-made compounds that are now banned by the Montreal Protocol. The mixing shuts down this chlorine- and bromine-driven ozone depletion.

In December 2019 and January through March of 2020, the stratospheric wave events were weak and did not disrupt the polar winds. The winds thus acted like a barrier, preventing ozone from other parts of the atmosphere from replenishing the low ozone levels over the Arctic. In addition, the stratosphere remained cold, leading to the formation of polar stratospheric clouds that allowed chemical reactions to release reactive forms of chlorine and cause ozone depletion.