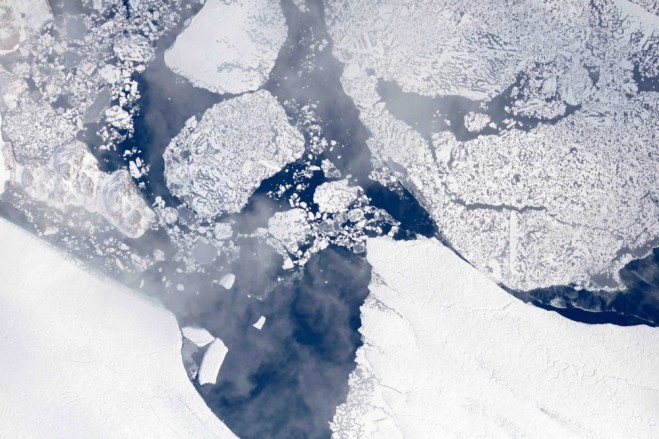 The terminus of the Zachariæ Isstrøm glacier in northeast Greenland was imaged from 28,000 feet during an Operation IceBridge flight on Aug. 29, 2017. (Credit: NASA/LVIS TEAM)

Operation IceBridge is flying in Greenland to measure how much ice has melted during the summer. The flights, which began on Aug. 25, 2017, and will go on until Sept. 21, 2017, repeat paths flown this spring and aim to monitor seasonal changes in the elevation of the ice sheet.

“We started to mount these summer campaigns on a regular basis two years ago,” said Joe MacGregor, IceBridge’s deputy project scientist and a glaciologist with NASA’s Goddard Space Flight Center in Greenbelt, Md. “If the flights go as expected, the result will be a high-quality survey of some of the fastest-melting areas in Greenland and across as much of the island as possible.”

For this campaign, IceBridge is flying on a B200T King Air aircraft from Dynamic Aviation, a NASA contractor. The plane is carrying the Land, Vegetation and Ice Sensor, a laser instrument built by Goddard that measures changes in ice elevation with an accuracy better than 4 inches, as well as a high-resolution camera system to map the ice surface. For more about Operation IceBridge and to follow the current campaign, visit www.nasa.gov/icebridge.