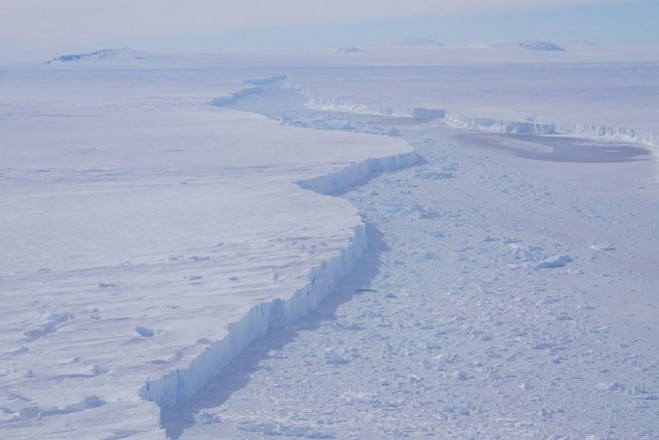 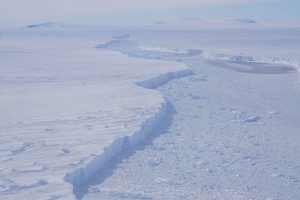 A close-up view of the rift separating Pine Island Glacier and iceberg B-46, as seen on an Operation IceBridge flight on Nov. 7, 2018. (Credit: NASA/Brooke Medley)

On Nov. 7, 2018, NASA’s Operation IceBridge flew over an iceberg three times the size of Manhattan—the first time anyone has laid eyes on the giant iceberg, dubbed B-46 by the U.S. National Ice Center, that broke off from Pine Island Glacier in late October. As NASA’s DC-8 flew its predetermined flight pattern, the new iceberg that calved in late October came into view.

On Oct. 29, the National Ice Center, which tracks icebergs for navigation purposes, estimated the surface area of B-46 at 66 square nautical miles, although satellite imagery and the IceBridge flight showed that the main iceberg is already beginning to break up.

Ice shelves, floating glacial ice areas that surround much of Antarctica, calve icebergs as part of the natural process of ice flowing out to sea. But scientists are also watching closely to see if the frequency of calving events is changing over time. In late 2016, IceBridge saw a crack beginning across the approximately 22-mile-wide trunk of Pine Island Glacier. It took a year for the rift to fully form and the iceberg named B-44 to break away in September 2017. The crack that would become B-46 was first noticed in late September 2018, and the iceberg broke away about a month later. Pine Island has now calved major icebergs in 2013, 2015, 2017 and 2018. Prior to that stretch, the glacier was experiencing major calving events about every six years.

Pine Island and nearby Thwaites Glacier alone are contributing about 1 millimeter per decade to global sea-level rise, as their flow of ice to the sea has accelerated in recent years, according to NASA research.