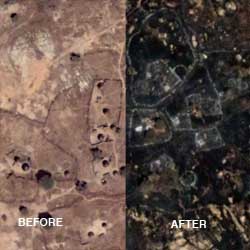 Amnesty International recently launched Eyes on Darfur, an innovative and powerful website utilizing photographs and high-resolution satellite imagery to communicate the crisis in the Darfur region of Sudan. The satellite images track human rights violations before and after reported attacks, highlighting changes in homes and vegetation in villages throughout the region. While the images only track the change in landscape, the visible damage provides compelling evidence about the indisputable atrocities that are devastating this part of the world.

The American Association for the Advancement of Science (AAAS) collaborated with Amnesty International on this project. AAAS is an international non-profit organization dedicated to advancing science around the world by serving as an educator, leader, spokesperson and professional association. Founded in 1848, the AAAS fulfills its mission to advance science and serve society through initiatives in policy, international programs and education.

A component of the AAAS, Science and Human Rights Program (SHRP), collaborates with human rights organizations to explore applications of science and scientific methodologies to address human rights challenges worldwide. In 2004, the SHRP shared Darfur images from DigitalGlobe’s QuickBird satellite with Amnesty International.

Seeing the full potential, Amnesty International requested that the AAAS analyze the high-resolution satellite imagery to assess violations in Darfur. Soon after, a pilot project was launched, where the AAAS committed to purchase satellite imagery and conduct analysis on the areas of concern for one year. Since then, the project has been extended through the end of 2009 with funds from the John D. and Catherine T. MacArthur Foundation.

Because of Darfur’s remoteness and sheer size (similar in size to the state of Texas), it has been difficult to monitor human rights violations. Traditionally, the best reporting has been on the border of Chad, where people can get in and out of the region relatively easily. In the internal regions of Darfur, it is harder to send or receive messages. While there are a number of humanitarian groups operating in this area, these groups are cautious to share information at the risk of jeopardizing their mission.

(Mouse Over the Images Below to See Before and After Images) 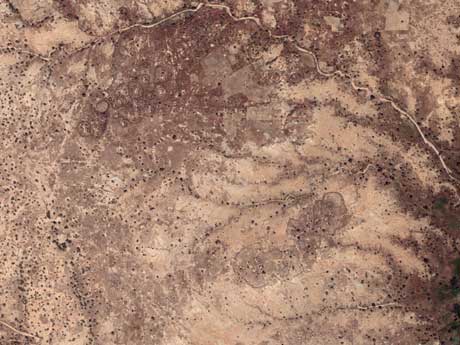 The village of Bir Kedouas in eastern Chad as imaged by DigitalGlobe’s QuickBird satellite
on Jan. 7, 2006, and Oct. 24, 2007, after an attack burned the majority of the homes.

For Eyes on Darfur, the initial leads on human rights violations come from geographers behind the scenes.  Individuals from Amnesty International have a network of contacts within Darfur that they can call and e-mail to receive firsthand reports on incidents. Unfortunately, these contacts often do not speak in terms of longitude and latitude, leaving the Amnesty International and AAAS staff to determine specific ground coordinates to locate the necessary imagery.

Areas are initially located by researching the report carefully for geographic clues, cross-referencing those clues with basemap and Landsat imagery and using coordinate databases from the Department of Defense and the UN. Then, the AAAS obtains an archived satellite photo from DigitalGlobe or GeoEye, and a new high-resolution image from either the QuickBird satellite or the EROS-B satellite from ImageSat International.

QuickBird and EROS-B satellites provide imagery with roughly two-foot resolution, with each pixel covering an area of two square feet. This imagery provides a sharp-focus view of buildings, building destruction, environmental sabotage and soil disruptions that might indicate mass graves. With both the archived and new imagery in place, the AAAS can then perform the necessary analysis and change detection on the before and after images. 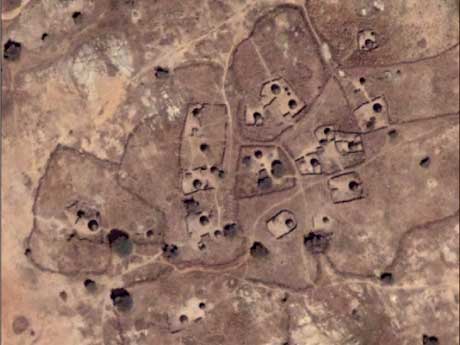 A closer view at the huts in the village of Bir Kedouas clearly
reveals the extent of the damage.

Initially, a staff member analyzes the images in Leica Geosystems’ ERDAS IMAGINE, a software tool providing the AAAS image processing and multi-spectral classification analysis. During the vegetation analysis, standard vegetation classification is applied to situations where crops are destroyed. Having a long history using ERDAS IMAGINE, the AAAS is able to keep costs low by utilizing the help of students and co-ops, who are trained in this software at their universities.

The staff visually compares imagery, scrolling through images of a specific location, counting houses before and after an attack. When compared, subtle changes consistently validate attack reports, providing visual evidence of each reported incident. Committed to the utmost precision, the AAAS continues to visually compare images, assuring accurate results. More sophisticated multi-spectral analysis is employed to help automate the process  of finding and counting structures in the vast area of interest, but this method can prove problematic given the differences in images from even the same sensor.

The response to Eyes on Darfur has been extremely positive. Just this summer, the United Nations (UN) and other international deployment efforts have drastically increased. In fact, the UN Security Council has voted to allow and fund peacekeepers into the Darfur region— a major change in their stance.  However, these efforts are dependant upon the amount of money they are able to raise and the donation of troops and materials by individual countries. 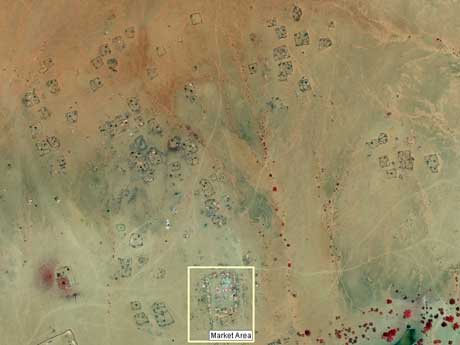 The Chadian ambassador to the United States recently communicated that Amnesty International was key in providing this change within the UN, with The Eyes on Darfur as a major component of this advocacy. While it is difficult to make this direct connection, it’s an indication that the website has been well received, and seems to be providing a catalyst for change.

Despite the positive response by the UN, the Sudanese government continues to assert that human rights violations are not occurring in Darfur, but rather that the idea is a vast Western conspiracy. While Eyes on Darfur has received a great deal of media attention, the Sudanese government has not responded specifically to this website or the analyzed imagery. 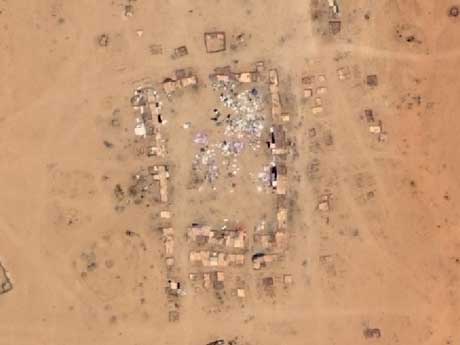 A closer view of the market at Um Sidir shows the impact of the attack.
Expanding Monitoring Efforts

In addition to Amnesty International’s Eyes on Darfur website, the AAAS has also been performing image analysis on areas in Zimbabwe and Burma, tracking other devastating human rights violations.

In 2005, the AAAS began monitoring a government-sponsored home demolition in the settlement of Porta Farm, located just west of the Zimbabwean capital of Harare. During this intentional gerrymandering, homes of the opposition party were deliberately destroyed.

For years Zimbabwe residents have known that human rights violations were taking place, videotaping incidences and regularly sharing these with media outlets. While the news spread, the proclaimed validity depended upon who was on the ground providing the reporting. If the news came from a member of the government’s opposition, the evidence was quickly dismissed as propaganda. After the AAAS’s extensive imagery analysis, the findings were submitted to the government of Zimbabwe to support court claims of Porta Farm residents.

In Burma, there has been a long-term ethnic cleansing campaign. As with Darfur and Zimbabwe, the AAAS has been monitoring the situation through changes in satellite imagery. Recently, Lars Bromley of the AAAS conducted a radio interview with BBC Asia, discussing the situation and his findings, receiving needed international attention for the crisis and stark criticism from the military government of Burma.

It is important to note that the AAAS is not only analyzing areas that have already been attacked, but also regularly monitoring images of areas under threat of attack.  Moving forward, the AAAS is exploring the use of algorithms to measure and assess human rights violations and plans to utilize other geospatial tools to determine the precursors of large-scale human rights disasters. 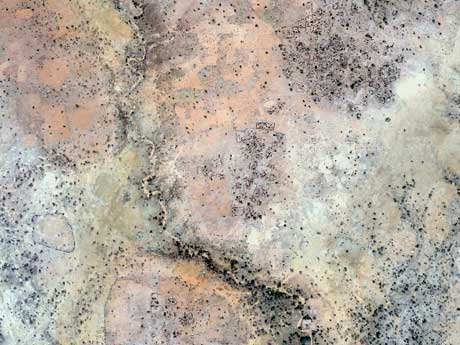 Two satellite images from DigitalGlobe’s QuickBird satellite of the village of Madoua, eastern Chad.
The first was taken on March 2, 2006, and the second on Nov. 4, 2006, after an attack.
The red dots indicate homes, and also illustrate analysis by AAAS.

Call to the Geospatial Community

Utilizing satellite imagery, GIS and image analysis tools, the AAAS provide a significant and powerful example of integrating geospatial technology. By promoting their results through Eyes on Darfur, the AAAS helps provide a voice to those whose rights are violated, and compelling evidence, calling for action.

When asked how the geospatial community can continue to support the AAAS’s efforts, Lars Bromley, project director, AAAS Science and Human Rights Program, states, “We of course want companies to continue to donate or vastly discount imagery and related geospatial software solutions. More importantly, we want to tap into the wide range of contacts and abilities those companies have.”

“With unique expertise, geospatial information providers understand the full potential of their applications for organizations requiring similar workflows,” continued Bromley. “If geospatial companies increase their shared resources and knowledge, we can then enhance and share our processes with other human rights organizations, thereby promoting greater collaboration. Ultimately, this will provide better awareness and understanding of the deep impact of human rights violations.”

While the MacArthur Foundation provides generous funding, the AAAS is always fund raising to offer more resources. The AAAS works with numerous non-profit organizations and their demands are truly infinite.  While small in comparison to the vast need, the AAAS is providing compelling evidence for several of the most known human rights violations. For Darfur, Zimbabwe and Burma, the AAAS’s efforts of accessing and analyzing appropriate imagery enables regular monitoring of regions at risk. Ultimately, this empowers human rights organizations, like Amnesty International, to promote accurate communication and indisputable proof, without risking the lives of the messengers that live within the devastation.