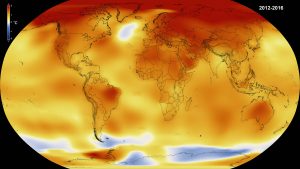 A screenshot was taken from an animation of global temperatures since 1880. Scientists at NASA’s Goddard Institute for Space Studies found that Earth’s average surface temperature has risen about 1.1 degrees Celsius (2.0 degrees Fahrenheit) since the late-19th century. (Credit: NASA/Scientific Visualization Studio)

According to authors of a new study from the American Geophysical Union, it is “extremely unlikely” that 2014, 2015 and 2016 would have been the warmest consecutive years on record without the influence of human-caused climate change.

Temperature records were first broken in 2014, when that year became the hottest year since global temperature records began in 1880. These temperatures were then surpassed in 2015 and 2016, making last year the hottest year ever recorded. In 2016, the average global temperature across land and ocean surface areas was 0.94 degrees Celsius (1.69 degrees Fahrenheit) above the 20th century average of 13.9 degrees Celsius (57.0 degrees Fahrenheit), according to NOAA.

“With climate change, this is the kind of thing we would expect to see,” said Michael Mann, a climate scientist at Pennsylvania State University in State College, Penn., and lead author of the new study. “And without climate change, we really would not expect to see it.”