June 4th, 2012
Discovering the Next Dimension: How LiDAR Data is Changing the Geospatial Workflow 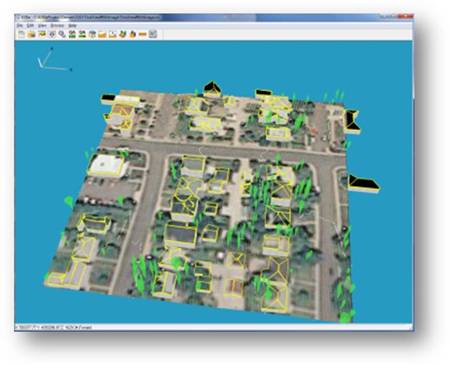 While traditional geospatial imagery remains an important part of the geospatial workflow, providing critical, two-dimensional information, decision makers are now beginning to utilize other types of data in order to get an even more accurate view of the world around them.

In recent years, one of these alternative data types – LiDAR – has become increasingly more prevalent as it becomes more cost effective and industries find tangible ways to use it as an aid in their decision making processes. An optical remote sensing technology, LiDAR is flexible enough to be used in imaging a wide range of objects, including buildings, rocks, clouds and trees. When used in conjunction with traditional two-dimensional imagery, the result is the most complete, accurate view of an area of interest available today. Additionally, LiDAR data can be captured quickly and efficiently, providing near real time information for end users, and while the availability has increased, the price of obtaining it has decreased, further creating cost effective opportunities for continued use. 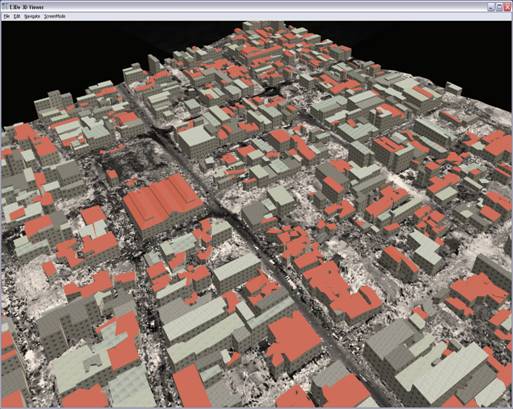 Haiti viewed in the 3D Viewer.

As a result of LiDAR’s growing popularity, geospatial software companies, such as Exelis Visual Information Solutions, have developed technology to help end users fully take advantage of this relatively new technology. The Exelis E3De software environment is designed for today’s growing number of LiDAR users, many of whom may not have extensive experience working with geospatial data, or who do not have training in advanced data analysis techniques. Following the industry trend of making complex geospatial analysis software easier and faster to use, E3De provides automation that allows users of any experience level to quickly prepare LiDAR data, accurately extract relevant features of interest from it, and export products for visualization or further analysis.

The increase of accessibility of LiDAR means additional, relevant applications for the data across industries.

A Critical Tool for Disaster Planning and Response

Damage from natural disasters often presents a tremendous challenge for rescuers, builders, residents, relief workers, and government personnel involved with rescue operations or aiding in post disaster rebuilding efforts. Disasters in recent years, such as the earthquakes in Christchurch, New Zealand and Japan, as well as the Haiti Tsunami, have influenced responders to find new technologies to supplement their traditional efforts, with the end goal of better, quicker response and rebuilding. 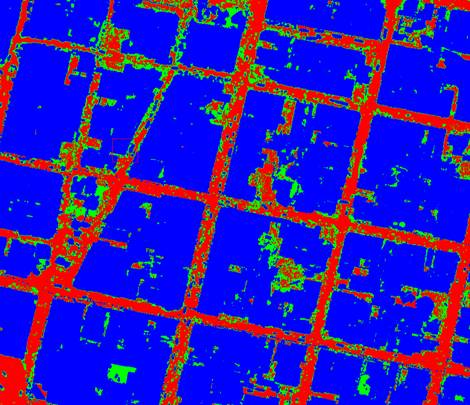 Output results from subtracting the DEM from the DSM where red is road, green is debris and blue are buildings.

This is an input for a network analysis to determine where emergency vehicles can get through.

In the Haiti and Japan disasters, LiDAR data was used for everything from initial response to damage assessment. First responders used it to add crucial information to maps, such as identifying damage extent to buildings, assessing which road networks were free of debris and safe for travel, and identifying safe helicopter landing locations so vital supplies could be delivered to the people who needed them most. Appropriate software processing tools for accurate and fast visualization allowed responders to quickly interpret situations. This crucial capability meant information was passed quickly so that emergency responders could be as efficient as possible.

LiDAR (Light Detection and Ranging) uses light waves and involves the transmission of light pulses and measurement of reflection times. LiDAR data are often collected from the air using airborne platforms such as airplanes or helicopter, with onboard sensors. Distances to objects are calculated from a sensor, while measurements are combined with precise navigational data to produce highly accurate elevation data in the form of point clouds.

Using software designed to create powerful, photorealistic 3D visualizations from the point clouds, such as E3De software from Exelis, users can classify and identify specific objects, such as buildings or ground cover like trees and bushes.

The defense and intelligence community was one of the first to adopt LiDAR as a new data type, now using it extensively to supplement their more traditional geospatial information in order to make more informed decisions. Used largely to create accurate, up-to-date terrain maps to assist in operations, LiDAR data is considered in the community to be faster to collect, more accurate, and the information from it much clearer, once appropriate software techniques are used to exploit it. The nature of LiDAR, with its flexible capabilities and ability to detect extremely small particles on objects, has made it an indispensible tool to the military, and its use by the military has further increased safety of citizens and troops.

Today, LiDAR plays a role in a variety of defense and intelligence missions. By using software to extract features of interest from a LiDAR data set, military personnel can now more effectively detect potential threats, such as vehicles, buildings, and improvised explosive devices (IEDs). LiDAR data processed with products like E3De also allows troops to more fully understand their surrounding terrain and topography, and is used to assess a good location for building a Forward Observation Base (FOB) for future operations, map out correct convoy routes through hostile and non hostile situations, landing zones, and to show where possible enemy fortifications are.

The use of processed LiDAR data has also exploded in environmentally conscious industries.  It can be used in for quantitative analysis for applications such transportation studies, coastal zone mapping, tree canopy tracking, and various oceanic studies.
In an example of a more directly utilitarian application, LiDAR is now being used to efficiently determine the appropriate roof top locations to place solar panels in both commercial and residential locations, an initiative driven largely by recent government mandates that require that more power come from renewable sources. To achieve the goal of less energy consumption, software technology is used to create 3D models from LiDAR data to identify buildings, trees, and other objects with respect to the land surface – critical information when trying to determine the best location for solar panels. The end result is the ability to identify the specific spot on a roof top that has maximum sun exposure. Proper placement ensures that panels operate at their peak performance, resulting in significant cost savings.

Models created using LiDAR data are also a great source of information for urban planning and local governments, helping them to analyze the future of their communities and how to plan and build accordingly.

If you would like to learn more about how software technology can help you use your LiDAR data, visit www.exelisvis.com/E3De.