November 12th, 2019
Arctic Shifts to a Carbon Source due to Winter Soil Emissions 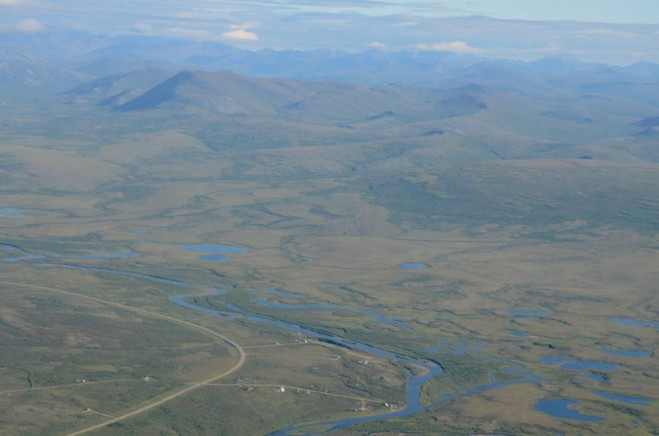 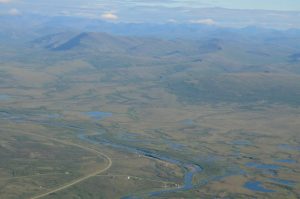 The Active Sensing of Carbon Emissions over Nights, Days and Seasons (ASCENDS) campaign flew over Nome, Alaska, on August 5, 2017, as part of NASA’s Arctic Boreal Vulnerability Experiment (ABoVE). (Credit: NASA)

A NASA-funded study suggests winter carbon emissions in the Arctic may be adding more carbon into the atmosphere each year than is taken up by Arctic vegetation, marking a stark reversal for a region that has captured and stored carbon for tens of thousands of years.

The study, published Oct. 21, 2019, in Nature Climate Change, warns that winter carbon dioxide loss from the world’s permafrost regions could increase by 41 percent over the next century if human-caused greenhouse gas emissions continue at their current pace. Carbon emitted from thawing permafrost has not been included in the majority of models used to predict future climates.

Permafrost is the carbon-rich frozen soil that covers 24 percent of Northern Hemisphere land area, encompassing vast stretches of territory across Alaska, Canada, Siberia and Greenland. Permafrost holds more carbon than has ever been released by humans via fossil fuel combustion, and this permafrost has kept carbon safely locked away in an icy embrace for tens of thousands of years. But as global temperatures warm, permafrost is thawing and releasing greenhouse gases to the atmosphere.

“These findings indicate that winter carbon dioxide loss may already be offsetting growing season carbon uptake, and these losses will increase as the climate continues to warm,” said Woods Hole Research Center Arctic Program Director Sue Natali, lead author of the study. “Studies focused on individual sites have seen this transition, but until now we haven’t had a clear accounting of the winter carbon balance throughout the entire Arctic region.”

This study was supported by NASA’s Arctic-Boreal Vulnerability Experiment  (ABoVE) and conducted in coordination with the Permafrost Carbon Network and more than 50 collaborating institutions. In addition to space-based observations of Earth’s changing environment, NASA sponsors scientific field campaigns to advance our understanding of how our climate is changing and could change in the future.

Researchers compiled on-the-ground observations of carbon dioxide emissions across many sites and combined these with remote sensing data and ecosystem models to assess current and future carbon losses during winter for northern permafrost regions. They estimate a yearly loss of 1.7 billion metric tons of carbon from the permafrost region during the winter season from 2003 to 2017 compared to the estimated average of 1 billion metric tons of carbon taken up during the growing season.

To extend model predictions to warmer conditions in 2100, the climate predicted for different scenarios of future fossil fuel emissions were used to calculate the effect on permafrost. If fossil fuel use is modestly reduced over the next century, winter carbon dioxide emissions would increase 17 percent compared with current emissions. Under a scenario where fossil fuel use continues to increase at current rates through the middle of the century, winter carbon dioxide emissions from permafrost would rise by 41 percent.