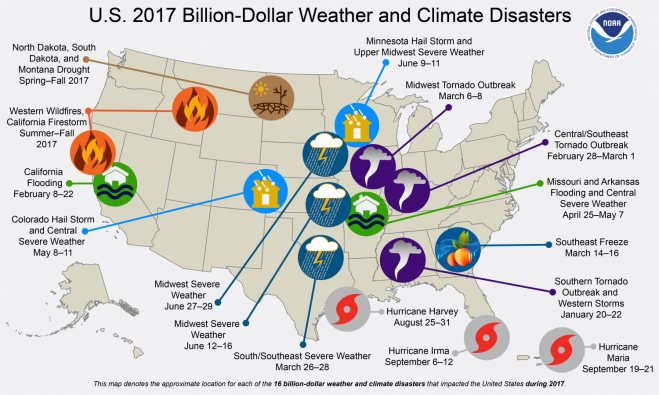 2017 will be remembered as a year of extremes for the United States as floods, tornadoes, hurricanes, drought, fires and freezes claimed hundreds of lives and visited economic hardship upon the nation. Recovery from the ravages of three major Atlantic hurricanes making landfall in the U.S. and an extreme and ongoing wildfire season in the West is expected to continue well into the new year.

The average U.S. temperature in 2017 was 54.6 degrees Fahrenheit (2.6 degrees Fahrenheit above average), making 2017 the third-warmest year in 123 years of record-keeping, according to scientists from NOAA’s National Centers for Environmental Information. In fact, the five warmest years on record for the United States all occurred since 2006.

2017 also was was the 21st consecutive year that the annual average temperature exceeded the average. For the third consecutive year, every state across the contiguous U.S. and Alaska experienced above-average annual temperatures.

Precipitation for the year totaled 32.21 inches (2.27 inches above the long-term average), ranking 2017 as the 20th-wettest year and the fifth consecutive year with above-average precipitation. The national drought footprint (total area) began and ended with about one quarter of the Lower 48 states in drought. The drought footprint reached a low of 4.5 percent in May, the smallest drought footprint in the 18-year period of the U.S. Drought Monitor.