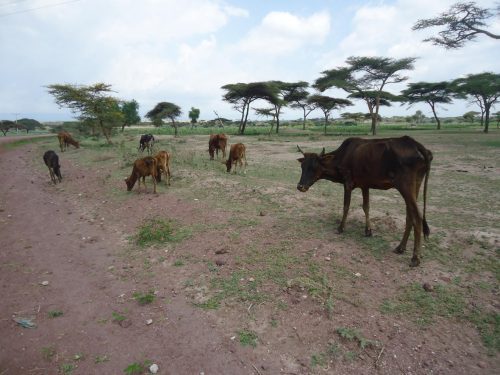 “Really?” and “Strange, but true” might be popular reactions to the idea that periodic El Niño events in the Pacific Ocean could have a long distance influence on drought conditions in Africa, almost half-a-world away. Unlikely as it may seem, these connections are widely accepted by climate scientists and weather experts across the globe. Strange, but true, indeed.

El Niño and its counterpart, La Niña, are the warm and cool phases of a recurring climate pattern across the tropical Pacific — the El Niño-Southern Oscillation – that shifts back and forth irregularly every two to seven years. By disrupting large-scale air movements in the tropics and thus affecting temperature, precipitation, and winds, these changes in the Pacific Ocean set off a cascade of global side effects with each oscillation.

In the northern hemisphere’s winter and fall of 2015, El Niño reached a record high temperature in December-January-February and triggered historic levels of famine far away in east Africa. A related drought across southern Africa affected 30 million people. In November of 2016 Zimbabwe still faced severe water shortages.

Scientists from the U.S. Geological Survey, the University of California Santa Barbara, and the National Oceanic and Atmospheric Administration (NOAA) tracked the severe droughts in eastern and southern Africa. This science team has recently published a paper in the Bulletin of the American Meteorological Society (chapter 15) that assesses the extent that warmer ocean waters resulting from human-caused climate change likely intensified the impacts of the drought.

The authors of the study evaluated the impacts of the rainfall reductions and air temperature increases in Africa during this period by means of a contra-positive experiment, in which a “world without climate change” was simulated in complex hydrologic models. These experiments revealed that the warming of El Niño beyond its historical averages during 1946-1975 likely helped produce a very large reduction in streamflow: 35% for Ethiopia and 48% for Southern Africa. Both regions experienced severe water shortages, as illustrated by estimates of per capita water availability.

“In summary, what we seem to be seeing,” said Chris Funk, a USGS scientist and lead author of the study, “is that, as the oceans warm due to climate change, pockets of very warm sea surface temperatures develop that often act to increase the impact of natural climate variations such as El Niño and La Niña. These extreme sea surface temperatures can intensify droughts over food insecure areas, contributing to water stress and disrupting economic growth.”

The data and scientific reasoning for these findings are detailed in the publicly available professional paper.

Monitoring drought to get ahead of famine

Ethiopia suffered drought conditions in 2015 that were comparable to the severe drought and ensuing famine of 1984, during which hundreds of thousands of people perished. Like the case in the 1980s, the 2015 Ethiopian drought was related to a strong El Niño. Unlike that terrible episode, widespread acute food insecurity was avoided in 2015-2016 due to effective climate services, early warning of potential food insecurity, and social safety nets, particularly through the Famine Early Warning Systems Network (FEWS NET).

Created by USAID in 1985 to help decision-makers plan for humanitarian crises, FEWS NET provides evidence-based analysis of food insecurity in some 35 countries. Implementing team members include the government agencies of NASA, NOAA, U.S. Department of Agriculture, and USGS, along with the commercial entities, Chemonics International Inc. and Kimetrica.