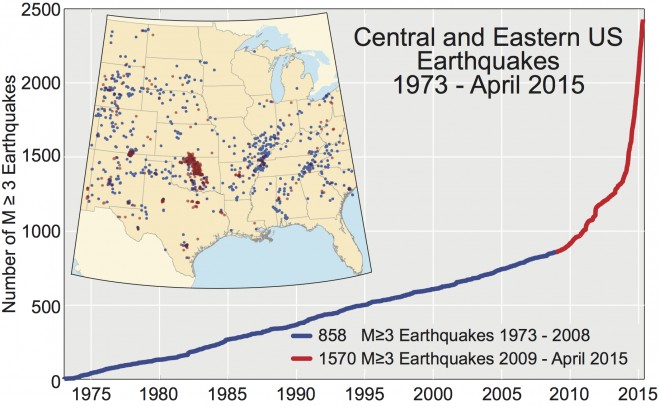 A figure shows the cumulative number of earthquakes with a magnitude of 3.0 or larger in the central and eastern United States, 1973-2015. The rate of earthquakes began to increase starting around 2009 and accelerated in 2013-2014. (Credit: USGS)

The central United States has undergone a dramatic increase in seismicity during the last six years. From 1973-2008, there was an average of 24 earthquakes of magnitude 3 and larger per year. From 2009-2014, the rate steadily increased, averaging 193 per year and peaking in 2014 with 688 earthquakes. So far in 2015, there have been 430 earthquakes of that size in the central U.S. region through the end of May 2016.

Injecting fluid underground can induce earthquakes, a fact established decades ago by USGS scientists. This process increases the fluid pressure within fault zones, essentially loosening the fault zones and making them more likely to fail in an earthquake. When injected with fluids, even faults that have not moved in historical times can be made to slip and cause an earthquake if conditions underground are appropriate.

There are several purposes for injecting fluid underground. The three main reasons are wastewater injection, hydraulic fracturing and enhanced oil recovery. Within the United States, each of these three activities has induced earthquakes to varying degrees in the last few years. Other purposes for injecting fluid underground include enhanced geothermal systems and geologic carbon sequestration.