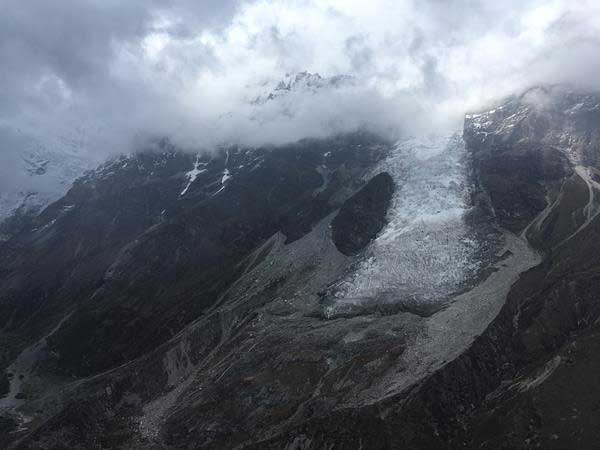 USC researchers found increased sulfur acidification in glacial samples, resulting primarily from the oxidation of fool’s gold and the release of CO2 into the atmosphere. (Photo credit: Paul Quackenbush)

According to a new study published by USC scientists in the Proceedings of the National Academy of Science, rock and soil breakdown in glaciers generates more acidity and releases more carbon than other forms of natural weathering. Perhaps most interestingly, it is the elevated oxidation of pyrite, popularly known as “fool’s gold,” in the glacial breakdown that produces increased acidity and leads to CO2 escaping to the atmosphere from rivers and the oceans.

“CO2 has gone up and down repeatedly over time, and we don’t really know why,” said Joshua West, professor of earth sciences and environmental studies at the USC Dornsife College of Letters, Arts and Sciences and the study’s corresponding author.

“We found glacial rivers are rich in dissolved sulfur, and when they’re rich in sulfur, we have found that this tends to be because of the weathering of pyrite or fool’s gold,” added Graduate Researcher Mark Torres of USC Dornsife’s Department of Earth Sciences, who served as the study’s lead author. “When these kinds of rivers flow into the ocean, the sulfur causes the transfer of carbon that was previously stored in rocks and the ocean back into the atmosphere.”

To measure the amount of carbon released by glacial weathering, Torres, West and the rest of the team analyzed a large database of 7,700 river glacier drainage samples. The database was made up of a variety of samples collected from all over the world: Argentina, Canada, Greenland, Nepal, Iceland and the United States, among others.