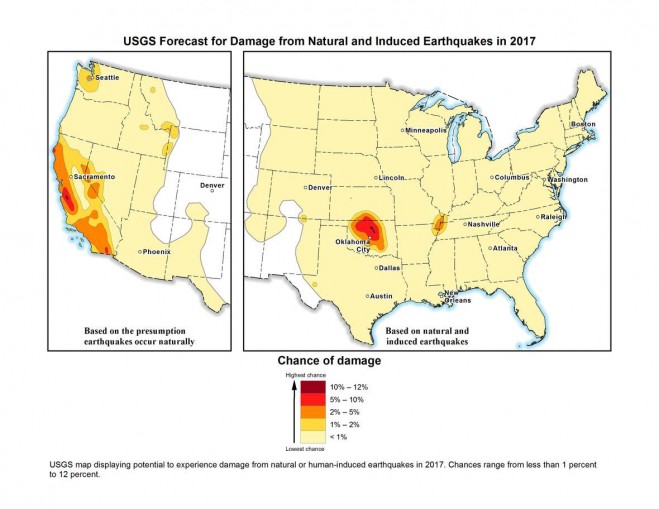 A USGS map displays the potential to experience damage from a natural or human-induced earthquake in 2017. Chances range from less than one percent to 12 percent.

New U.S. Geological Survey (USGS) maps identify potential ground-shaking hazards in 2017 from human-induced and natural earthquakes in the central and eastern United States (CEUS). This is the second consecutive year both types of hazards are forecasted, as previous USGS maps only identified hazards from natural earthquakes. This research recently was published in Seismological Research Letters.

Approximately 3.5 million people live and work in areas of the CEUS, with significant potential for damaging shaking from induced seismicity in 2017. The majority of this population is in Oklahoma and southern Kansas.

Research also shows that an additional half million people in the CEUS face a significant chance of damage from natural earthquakes in 2017, which brings the total number of people at high risk from natural and human-induced earthquakes to about 4 million.

“The good news is that the overall seismic hazard for this year is lower than in the 2016 forecast, but despite this decrease, there is still a significant likelihood for damaging ground shaking in the CEUS in the year ahead,” said Mark Petersen, chief of the USGS National Seismic Hazard Mapping Project.

The 2017 forecast decreased compared to last year because fewer felt earthquakes occurred in 2016 than in 2015. This may be due to a decrease in wastewater injection resulting from regulatory actions and/or from a decrease in oil and gas production due to lower prices.

Despite the decrease in the overall number of earthquakes in 2016, Oklahoma experienced the largest earthquake ever recorded in the state as well as the greatest number of large earthquakes compared to any prior year. Furthermore, the chance of damage from induced earthquakes will continue to fluctuate depending on policy and industry decisions, Petersen noted.

“The forecast for induced and natural earthquakes in 2017 is hundreds of times higher than before induced seismicity rates rapidly increased around 2008,” said Petersen. “Millions still face a significant chance of experiencing damaging earthquakes, and this could increase or decrease with industry practices, which are difficult to anticipate.”