A joint mission between Nasa and the US Geological Survey (USGS), Landsat 9, has collected its first light images of Earth. 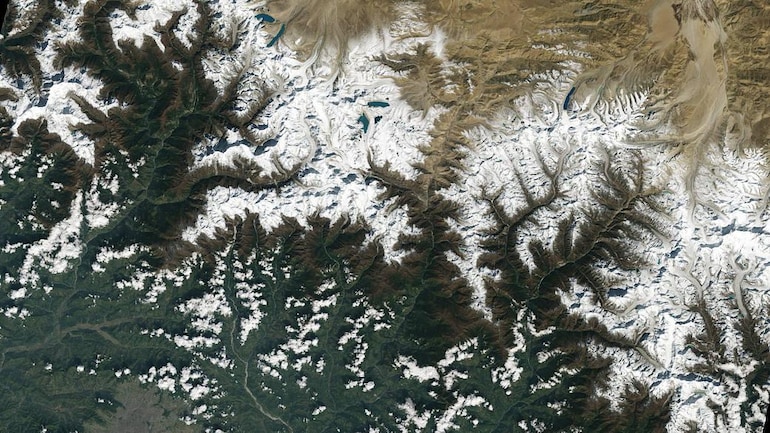 The city of Kathmandu, Nepal, seen at the bottom left of this Landsat 9 image, lies in a valley south of the Himalayan Mountains between Nepal and China. Glaciers, and the lakes formed by glacial meltwater, are visible in the top middle of this image. (Image: Nasa)

Landsat 9, a joint mission between NASA and the US Geological Survey (USGS) that was launched on September 27, 2021, has collected its first light images of Earth.

The images, acquired on October 31, provide a preview of how the mission will help people manage vital natural resources and understand the impacts of climate change, as per a press release by Nasa.

Nasa Administrator Bill Nelson said, “Landsat 9’s first images capture critical observations about our changing planet and will advance this joint mission of NASA and the US Geological Survey that provides critical data about Earth’s landscapes and coastlines seen from space.”

He added, “This program has the proven power to not only improve lives but also save lives. NASA will continue to work with USGS to strengthen and improve accessibility to Landsat data so decision makers in America and around the world better understand the devastation of the climate crisis, manage agricultural practices, preserve precious resources and respond more effectively to natural disasters.” The first light images collected by Landsat 9 shows Detroit, Michigan, with neighboring Lake St. Clair, the intersection of cities and beaches along a changing Florida coastline and images from Navajo Country in Arizona that will add to the wealth of data helping us monitor crop health and manage irrigation water. In the Western US, in places like the Navajo Nation as seen in this Landsat 9 image, Landsat and other satellite data help people monitor drought conditions and manage irrigation water. (Image: Nasa) Sediments swirl in Lake Erie and Lake St. Clair in this Landsat 9 image of both Detroit, Michigan, and Windsor, Ontario. The Great Lakes serve as sources of freshwater, recreational activity, transport, and habitat for the upper-midwestern US, and water quality remains a high priority. (Image: Nasa) The white sands of Pensacola Beach stand out in this Landsat 9 image of the Florida Panhandle of the United States, with Panama City visible under some popcorn-like clouds. Landsat and other remote sensing satellites help to track changes to US coastlines, including urban development and potential impacts of rising sea levels. (Image: Nasa)

The new images also provided data about the changing landscapes of the Himalayas in High Mountain Asia and the coastal islands and shorelines of Northern Australia. Landsat 9 is an advanced satellite, ninth in the series, which will monitor key natural and economic resources from orbit. The satellite will be managed by Nasa’s Goddard Space Flight Center and will carry two key instruments onboard the Operational Land Imager 2 (OLI-2), which collects images of Earth’s landscapes in visible, near-infrared and shortwave infrared light, and the Thermal Infrared Sensor 2 (TIRS-2), which measures the temperature of land surfaces.

Landsat 9 is part of a joint mission by Nasa and the US Geological Survey, which over five decades have helped in understanding the functioning of the planet and the rapid changes it goes through. Landsat series has helped in measuring several changes including the speed of Antarctic glaciers, track water use in crop fields, monitor deforestation in the Amazon rainforest.

Landsat 9 was launched on September 27 from the Vandenberg Space Force Base.

Landsat 9, along with its sister satellite Landsat 8, will collect images from across the planet every eight days to help monitor the Earth’s health and help people manage essential resources including crops, irrigation water, and forests. The satellite will orbit the planet every 99 minutes and complete 14 orbits every day around the planet.

Nasa has said that the Images from Landsat 9 will be added to nearly 50 years of free and publicly available data from the mission the longest data record of Earth’s landscapes taken from space.