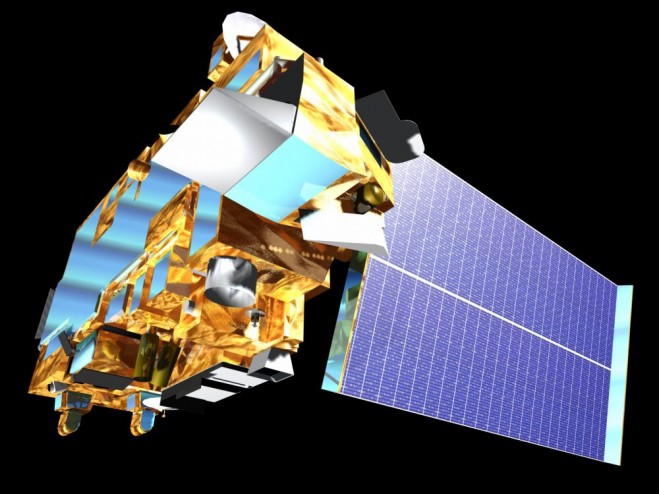 Fresh white snow can reflect up to 90 percent of sunlight, but with dust on the snow, more light is absorbed, and the snowpack melts at a much higher rate during runoff season. NASA satellites Terra (shown in this artist’s concept) and Aqua can detect dust in the snow to estimate the additional heat-producing energy absorbed by the snowpack. (Credit: NASA)

Hydrologists at the Colorado Basin River Forecast Center are providing streamflow forecasts for watersheds within the Colorado River Basin, which includes some of the most parched land in the United States.

“The forecasts we get from the center provide crucial information for managing our water resources and reservoir facilities,” said Dave Kanzer, a deputy chief engineer for the Colorado River District in Glenwood Springs, Colo. “If we receive less water than the forecasts predict, we won’t have enough saved in the reservoirs to keep the river flowing throughout the irrigation demand season. Conversely, if we receive more than forecasted, we could have to release extra water, without causing damaging floods.”

Aware of the importance of accuracy, the center inputs numerous readings into a complex computer program that uses that information to generate its forecasts. Prior to 2011, those inputs came solely from ground-based sensors and direct observations from staff. However, 2009 served as a turning point when massive storms blew what seemed to be unprecedented amounts of dust from the Colorado plateau onto the pristine white snow in the Rocky Mountains. Under a thick blanket of dust, the normally reflective white snow absorbed more of the sun’s energy, and the snowpack melted at a much faster rate than expected during the runoff season.

“We found that really dusty conditions increase the rate of snowmelt about as much as raising the temperature by 1 to 3 degrees Fahrenheit,” explained Stacie Bender, a hydrologist at the center. “It became very clear that we had to identify a more-precise way of measuring dust on snow.”

With NASA’s help, the center began to incorporate two sets of remotely sensed data into its forecasting model. The first set gave them a more accurate reading of where the snow was located, while the second provided them with a clearer picture of the snowpack’s surface conditions and specifically the amount of additional sunlight absorbed by dust contained in the snowpack.

With more accurate forecasts, water managers can make better decisions about when and how much water to store and/or release into the Colorado River basin—decisions that can have a dramatic impact on the lives and well-being of people and wildlife.