The annual INTERGEO was held in Cologne, Germany last week where about 15,000 people were in attendance for the event under the theme ‘Knowledge and Action for Planet Earth’. Professor Karl-Friederich Thone, President of the German Society for Geodesy, Geoinformation and Land Management (DVW) initiated the event. He spoke about the strength of INTERGEO and also indicated that patron of the conference, German Federal Minister of the Interior Thomas de Maiziere also understands the value of geoinformation value in society.

The Arnsberg district authorities and the geological service of North-Rhine-Westphalia were presented with a GIS Best Practice Award at the event along with a 5,000 euros gift by the DVW. 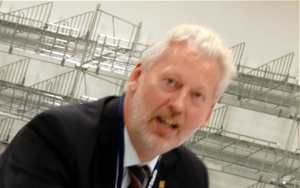 Thone suggested that data privacy and data protection do not have to be mutually exclusive, a topic later discussed during the event.

The INTERGEO is largely unmatched in terms of size, diversity and range of products being offered all in one conference setting. The Cologne Messe, located in the center of the city provided easy access with two large floors holding the entire trade show together with meeting and discussion facilities.

German Constitutional Court judge Prof. Dr. Udo Di Fabio presented the first keynote. He spoke on the topic of ‘Private companies ahead of the state – economic freedom and public obligations’. His presentation discussed issues surrounding geodata privacy within the country.

He compared many instances, suggesting that a pragmatic approach is needed. He also pointed to corresponding elements within the wider Europe Union legislative bodies dealing with privacy of data and technologies. 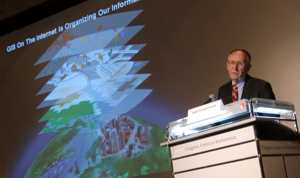 Jack Dangermond, Esri founder and president also presented a keynote address. He discussed the role of GIS in meeting ‘planet earth’ challenges and suggested that a convergence of forces is growing and giving support to the use and application of GIS across a multitude of disciplines and applications.

Dangermond suggested that “GIS can make a difference” and he announced a new ArcGIS INSPIRE product that would be incorporated within the ArcGIS platform.

He also pointed to the growing rise in citizen participation within the GIS community and how new technologies and approaches are creating collaborative and participative opportunities for many people.

On this note Esri has produced a product for Communities that allows them, through the use of an integrated geoportal, to share and work together with a broad range of commercial and non-commercial geodata sources. 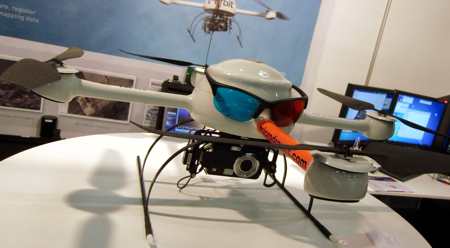 Using a small  helicopter-like drone with four propellers, the microdrone has several advantages for flying in local environments using a standard digital camera to take both planimetric and oblique angle photographs.

It contains a Waypoint Generator, In-Flight Tracker and can even produce stereoscopic mapping. Images can be created orthographically.

The benefits of the small platform are the speed at which it can be launched, easy of use and the lower cost, all making it suitable for small area analysis.

I had the opportunity to spend some time with Leica Geosystems to learn about their latest surveying and aerial platforms. At INTERGEO the company presented the world premiere of it’s new Leica Viva TS15 robotic imagingtotal station and Leica RCD30, a new medium-format airborne camera.

But the list of new products from this company did not stop there including the Leica Scanstation C10 – all-in.one 3D laser scanner, Leica Viva NetRover – GNSS solution for networks, Leica Viva SmartPole – combined GNSS/TPS and Leica Zeno GIS – a GIS solution for Field and Office software among many more. 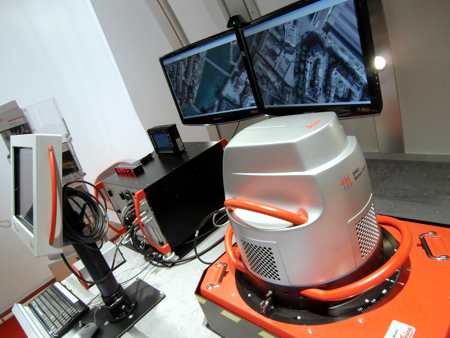 What struck me as I walked through a series of products was the sense of innovation going on at the company which was visible through the many products.

Whereas the company previously produced fine products, there was often a sense of refinement of existing products.

The new products being produced by Leica Geosystems have a sense of newness and energy about them that attracts attention causes one to wonder of using them in new ways for new opportunities.

The Leica Viva TS15 is an example of this. The robotic total station is capable of high resolution imagery creation, dynamic tracking and includes the SmartWorx software.

A sketch tool is included with linkable imagery and grid scanning that enables graphical scanning.

Infoterra was also present and exhibiting imagery from a wide variety of satellites including SPOT Image, TerraSAR-X and the new TanDEM-X. 3D topographic mapping is being provided through TerraSAR-X data and the term ‘radargramnetry’ is being promoted to include image processing for DTM and DEM creation.  Infoterra also continues to provide Rapid Assessment Services for change detection. 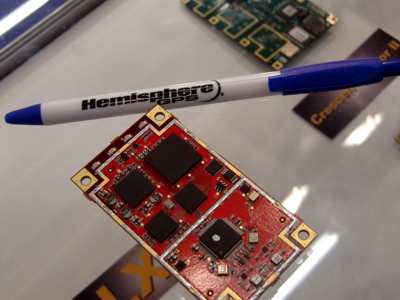 Hemisphere GPS produces the world’s smallest GNSS Receiver Board in it’s new miniEclipse. Measuring a mere 41 mm by 71 mm, the miniEclipse is enhanced with Eclipse RTK and COAST technologies.

The device can use DGPS correction data during times of interference and is capable of sub-meter positioning for up to 40 minutes without DGPS signal.

These devices feature WiFi, Bluetooth and 2-5 meter accuracy GPS positioning. These computers are rugged and built for extremely harsh environments.

ArcGIS for INSPIRE is a INSPIRE-compliant spatial data infrastructure (SDI) product. Exhibited by con terra GmbH, it is a logical component of the ArcGIS platform.

con terra is building the European SDI Service Center that incorporates a range of services for all aspects of SDI, INSPIRE, ArcGIS for INSPIRE and ArcGIS for INSPIRE add-ons. This include securityManager, licenseManager and serviceManager. The product is further supported through the FME INSPIRE Solution Pack. 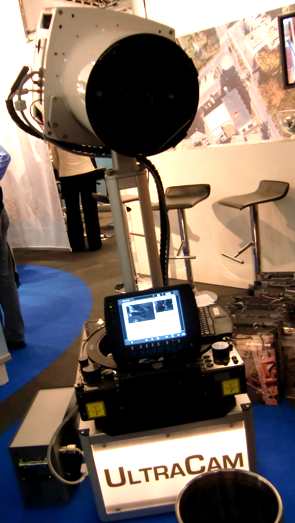 Carlson Software Inc. announced a new line of GNSS Receivers. These are provided to meet the growing demand for 3D machine control and incorporate the Ashtech brand GNSS technology.

A complete MC Pro brand has been created. This partnership couples the best in GNSS technology with the already existing expertise Carlson has in the area of machine control software.

It includes Open Position Architecture (OPA) that allows people using Carlson software to include other GNSS products.  Meanwhile, Ashtech introduced a new 3D GNSS Mission Planning software that is web-based and freely available over the internet to users worldwide.

Also, the ProMark 100 Compact GPS and GLONASS receiver was presented. It is a survey receiver and part of the ProMark 3, Promark 3 RTK and ProMark 500 GNSS family of receivers.

Microsoft’s Vexcel Imaging GmbH presented the UltraCAM large format digital aerial camera. The company sold 30 of these cameras to date for 2010 and images can be processed with the new UltaMAP 2.1 software.

imajbox is an interesting product for it’s simplicity to implement and extract useful road network vector information. Based on the imajtrack camera, quickly mounted on any vehicle, the camera collects a series of images that are web processed for asset inventory management – the assets are extracted from the video.

These are geo-referenced and identified and made for use in GIS systems.

It is a standalone solution and can be used qucikly and effectively to generate and populate road network databases for use in road planning, signage, street light assessments, public transport and parks and green areas.

gatewing x100 was presented at INTERGEO. The small UAV is used to capture digital images over the landscape and to develop high-resolution digital terrain models. As the company states,

“The X100 was engineered with a very specific twofold focus: It should carry a camera payload in a straight and regular scan pattern and bring it back to the operator in a safe and shock-free manner.

It should do its job in a wide range of weather and environment conditions and it should allow for day-to-day handling and intensive usage, just like any other surveying equipment. That is why we conceive the X100 not merely as an unmanned aircraft, but more as a tool.”

There are many more new products and services that were presented at INTERGEO 2010 and can be seen through the INTERGEO website at www.intergeo.de. I’ll be writing more about them in the days ahead.

Other reports from this conference blogged about: