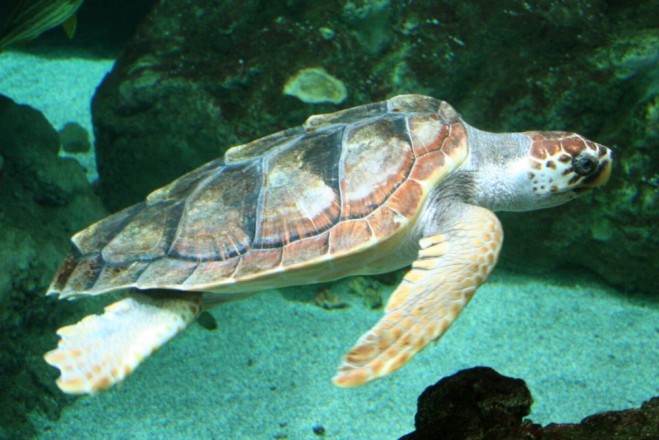 Researchers conclude that the well-being of the loggerhead turtle population in the Cuban archipelago is tenuous in the face of climate change.

Loggerhead turtles are particularly susceptible to climate change as the risk of nest flooding increases and the health of hatchlings declines. Florida holds the world’s largest nesting population of loggerheads, yet little is known about the species’ activity in nearby Cuba. A recent article published in Chelonian Conservation and Biology suggests changing climate may be altering the reproduction of this threatened, and in some areas endangered, turtle species.

Researchers from Cuba and the United States spent 18 years studying loggerheads in the Cuban archipelago. The small loggerhead nesting population of the Guanahacabibes Peninsula has benefited from a local conservation program, but until now, published studies have focused primarily on Cuba’s abundant green turtles and highly endangered hawksbills. Cuba is the only Caribbean country with more than 100 loggerhead nests spread over several nesting sites and lining southwestern beaches.

“What is especially exciting about the area where we are working is its geographical location where the Gulf Stream exits the Caribbean and interacts with the Gulf of Mexico and eastern U.S. seaboard. This puts the turtle population there at an important nexus between three different countries (United States, Cuba, Mexico) with considerable connectivity with the rest of the western Caribbean,” said Fernando Bretos, research associate at The Ocean Foundation.

During the 18-year study, almost 2,500 students and workers monitored loggerhead nesting activity and density on 10 beaches on the Guanahacabibes Peninsula. They measured and tagged female turtles, tracked their migrations and recorded total nest numbers. The authors of the paper report that the number of loggerhead nests in the study sites increased over the study period and hit record highs in 2012-2015. For most of the study, reproduction peaked in mid-June, but in 2015, that peak shifted to late May.

As temperatures in Guanahacabibes have risen, researchers have recorded smaller clutches containing smaller hatchlings and shorter nesting seasons consisting of shorter incubation periods. Additionally, a greater proportion of the hatchlings have been female. These results indicate climate change may be affecting the reproductive cycle and success of the species.