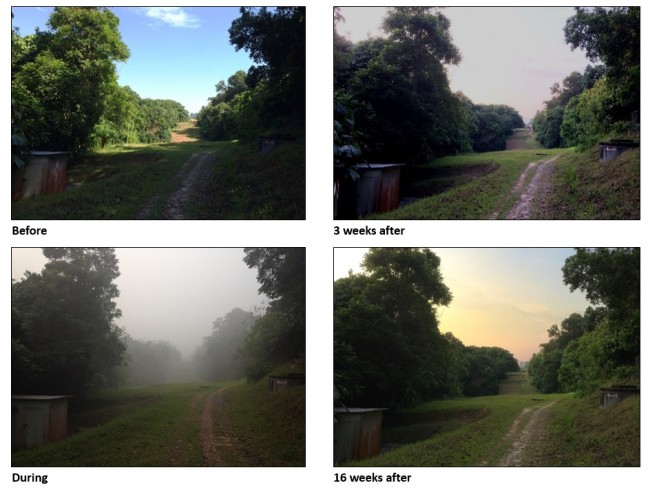 Tropical Asia experiences fires and haze annually, which cause significant human health problems and economic damage across the region. The 2015 event was one of the worst on record.

Forest fires in Southeast Asia during the El Niño droughts of 2015 caused considerable disruption to the biodiversity of the region due to the smoke-induced haze they created, according to new research published in the Environmental Research Letters journal and led by Benjamin Lee at the University of Kent and the National Parks Board in Singapore.

In the first study of its kind, Benjamin monitored wildlife acoustic activity in Singapore before, during and after the major forest fires that hit the region in 2015. The data showed a dramatic drop in acoustic activity by as much as 37.5 percent during the haze as animals were affected by the pollution. It took a further 16 weeks after the haze had dissipated before acoustic levels showed even a partial recovery. Furthermore, researchers said it’s highly likely the damage to wildlife was even greater in locations closer to the fires, where air pollution levels were 15 times higher than those in Singapore.

The findings indicate that large-scale air pollution events, such as those caused by forest or peatland fires, have a far greater impact on biodiversity than previously thought and that preventing such events is paramount.