The annual Esri European User Conference was held in Madrid, Spain October 26-28, 2011. With 3000 registered for this event, it made it one of the largest that the company has held in Europe. While most of the audience was from Spain, followed by other Europeans, there were many people attending from distant locations around the world. Presentations were given in both Spanish and English with translation available. 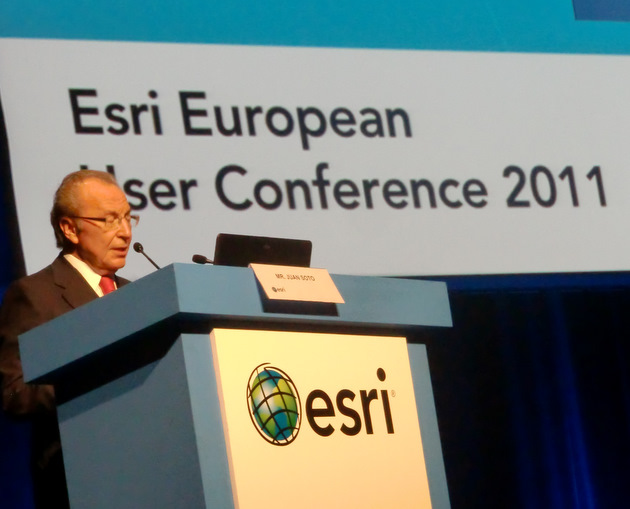 The first award noted the digital education of the citizens within the city using GIS. The Catalunya award noted the development of broadband activities within that region, specifically the benefits being delivered for mobility applications.  The project resulted in the aggregation of broadband carriers into one seamless GIS-based application. This allowed emergency and disaster services to know when and where communication would be hindered due to natural events or destruction of parts of the network, thereby impacting response. It would provide a clue as to where to fix telecommunications for specific areas to return service and infrastructure under needed circumstances.

Vision for GIS
Jack Dangermond, Esri President then delivered an address entitled ‘The Vision for GIS‘. “The latest trends are toward engaging citizens,” he said. “We see GIS in many emergency and 311 services around the world.” He also noted that recent developments with respect to ArcGIS are now poised to deliver “the next generation of GIS” and included the forces of – measurement, increased data volumes, computing evolution, connectivity, science and GIS education. 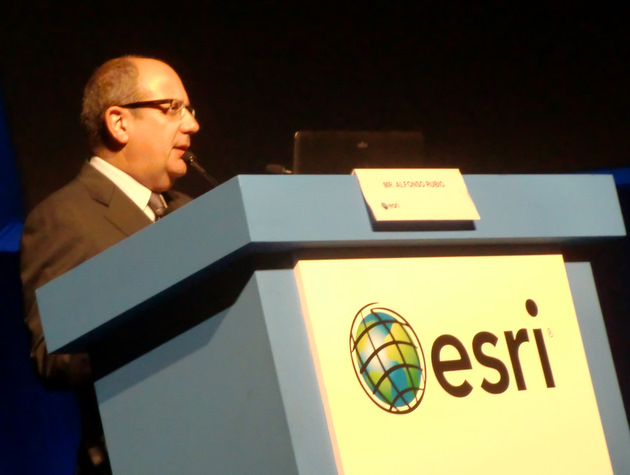 Alphonso Rubio, CEO – Esri Spain “GIS is now heading toward a new pattern – The Cloud – where both thick and thin devices will arise and deliver applications into an Open Environment – not just Google or Microsoft, and many of these will be easy-to-use.  “This change represents a new modality, one that can be compared to the beginning of movies and books,” Dangermond said.

Awards
Aart van Wingerden, EMEA Regional Manager ESRI Europe then introduced Ingrid Vanden Berghe, new President of Eurogeographics who spoke on the topic of the ‘Geospatial Contribution to the Digital Agenda for Europe’. “We expect to deliver broadband to all EU citizens by 2013,” she said. “This will allow access to government services, stimulate the development of online content, simplify the creation of content and ensure the protection of intellectual property,” Berghe indicated.  Eurogeographics represents 56 different national mapping agencies in association with a goal to help members to develop Nation Spatial Data Infrastructure (NSDI), inform about cartography and to facilitate exchange between agencies and locations. 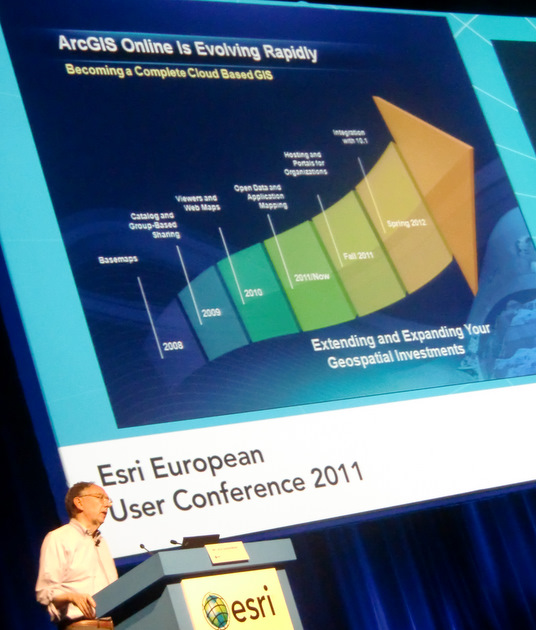 ArcGIS Online
Christophe Charpentier, Product Manager at Esri then talked about ArcGIS. “The expectation has changed and people are consuming more basemaps and want reference data in those products, ” he said. That meaning – the quality of the data was part of the attraction and what people demanded. ArcGIS Online is available with a series of basemaps including a topomap, base cadastral, elevation imagery and world streetmap in addition to others. “The base mapping acts as the constant upon which users can add data of their choice, ” he said. Esri offers voth commercial availability of ArcGIS Online to companies like TomTOM and GeoEye, while also making available public services for general use.

My impression from everything I saw at this event suggests that Esri has put immense effort into ArcGIS Online the last 12 months or so. There are many small changes I witnessed in the demos that are not in the sphere of add-ons, but more in the sphere of adding greater efficiency.

Improved cartographic capabilities, Intelligent Maps, Maplex now part of ArcGIS, ENVI Imagery functionalities, smartphone support and – the ability to drag a CSV file to a map and watch the data locate itself and symbology rise up. In my view, this is easily the most powerful GIS the company has ever produced with true multi-functional, adaptable and data creative support mixed in with performance.  We are heading to Cloud-based GIS soon and if you are not on.board yet, then this version ought should be the one edging you to try it out.

Education
Michael Gould is Esri Director of Education and he acted as the chairman of the first education session in addition to giving the first presentation ‘Thoughts on GIS Education’. He pointed to the main capabilities of GIS as helping to fulfill these possibilities including data management, cartographic production, imagery support, education materials and visualisation.  Around the world 7.000 institutions use Esri software he indicated. He also indicated that the company is helping many of the organisations to understand that GIS can be used to run their facilities and infrastructure as well as student services – seeking to broaden on-campus use of the technology beyond education alone.

“Schools need to use both heavy and light GIS technologies in their spatial data delivery,” Gould said. He asked, “how can we re-create society?” through the use of GIS technology. He wondered “how can we teach about innovation useing GIS?” And, he mentioned, “how many of us look for multi-dimensional and cross-functional approaches?” The later pointing clearly toward a need to stimulate creative spatial thinking. Although Gould mentioned that users could be managed more closely with ArcGIS Online, it was not clear to me what that meant at this time – nor if people would welcome too much closeness.

He did mentioned that teachers often voice complaint over changing software versions, but he also indicated that if they are mentioning that frustration, then their material development was too focused on button pushing, and not enough on spatial thinking.

Mary Farquar of the Institute of Education at the University of London talked about ‘Geography with a different view through GIS’. She spoke about work concept-based education. “We don’t talk about what we want to do with it [GIS] enough,” she said. “We need geography with a manifesto, to help students to understand the geography around them.”  She also queried the audience as to what constitutes a Core Curriculum.

Health
I sat in on the presentation ‘Integrated Health Information System’ Junta de Castilla Leon and learned how spatial data is being used to provide GIS services for health purposes within the region. Tele Atlas data is included in the mapping for 248 Basic Zones and 184 Zones for social-sanitation. The use of GIS has been so welcomed in health that these programs boast 70% user rates. This information is being used to determine occurrence rates and users can create also create graphs and pie charts of the data, supporting presentations. 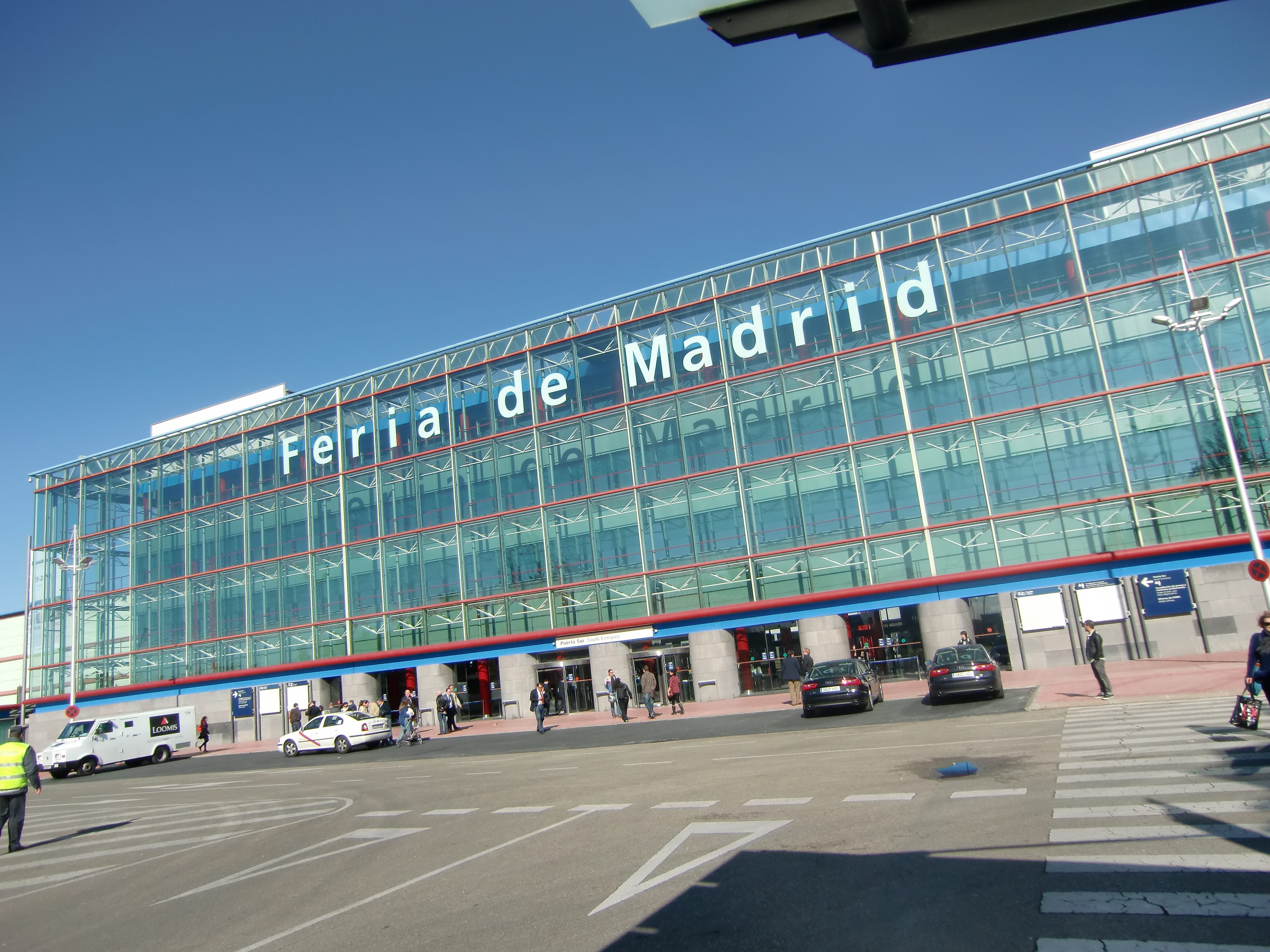 ‘Converting Hospital Floor Plans into Maps for Spatial Analysis in GIS’ was presented by Dave Grahame of University College London. Working with a large quantity of CAD-based drawings, he conducted on-site visits to the hospital in addition to converting data from 2D to 3D to build his database on a floor-by-floor basis.

“8.2% of people visiting a hospital will become infected during that visit,” he said. These infections are costing 1 billion GBP per year in terms of resources to deal with them. They also cause greater use of bed space. He indicated that spatial analysis may hold the key to monitoring such outbreaks within the buildings and therefore assist to deal with their reduction and management at lower cost.  GIS can be used for better architectural planning, transport within corridors, layouts and delivery of emergency services. “We think that the ability to development ‘Medical Dashboards’ linked to main hospital databases is the route forward.”

Politics
The study of ‘A Global Intelligence-driven Geospatial Political Violence Risk Ratings’ model through the use of GIS was presented by Cathy  Wilford. Her work involved looking at risk and security factors for nations and regions around the world, thereby developing a series of indices for assigning risk ratings.

These included war risk, terrorism possibility-occurrence, level of civil unrest and a combined factor that assessed integrated impacts.  The company then maps these levels, and that information is used for funding, emergency-security work and political decision making. Country ratings can include several local assigned events. Map algebra is used to integrate information and results are scaled from 0 to 10.

Risk of terror targets, historical density, relative regional analysis and country scoring are contribute toward more defined and locally applicable results ratings. In this case 500m x 500m cells are used to develop the applications. This resulted in a total of 200 billion cells x 4 scores to yield 8 million calculations – all of which can rapidly change daily.

At first Wilford used Python scripts originating from Modelbuilder to enact individual changes, but later switched to batch processing because of the time involved to keep work up-to-date.  The nature of this work resulted in the interest of several large insurance companies showing interest for related work. 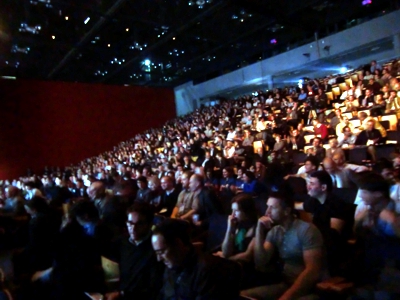 Environment
In the hydrology section of presentation, Ye Zhao of the Politecnico Di Torino, Italy spoke on the topic ‘GIS-based model for assessing groundwater pollution potential from pesticides’. His work led to the conclusion that ground water tables and aquifers were the key factors contributing to wider movement of pesticides in the environment.

‘Application of the INSPIRE Directive to water management on large irrigation areas – Telereg Project’ as presented by Manuel Erena described a collection of 47 weather stations whose data are being integrated through OGC WMS to provide Annex I and II level data. This work can be seen at www.siam.mida.es.

Agriculture
The ‘LPIS Quality Reporting Tool’ was developed at Wageningen University together with ALTERRA. Marcel Meijer described the tool that is being used to test spatial data quality. In the European Union, the Common Agricultural Policy (CAP) has a budget of €55 billion.  That amount represents 45-55% of the entire budget of the EU and amounts to €460 / hectare of agricultural land qualifying for the subsidy. A problem exists whereby many measurements of agricultural lands are inaccurate, thereby assigning subsidies incorrectly.

LPIS is used to more accurately assess agricultural lands for subsidy purposes and is based on the use of satellite or airborne imagery for that determination.  Parcels of land have unique identifiers and as of 2005 all agricultural land in the EU must be in a GIS form – meaning it not only has alphanumeric identification but also attribution. As the process works, an assessment is made and farmers can re-evaluate the results before final decisions are made.  Such a system demands stable identification, correct quantification and the ability to assess any parcel.

Jenk Janssen of ALTERRA spoke on the title ‘Geographic management and monitoring of disease livestock events’. His work related to the mapping of these outbreaks and the interjection of GIS tools immediately to assess roads and transport vectors for their potential to spread diseases. Within The Netherlands there have been several serious outbreaks involving animal diseases. As a result much has been learned about publishing results early, and his words, to include widespread use of the Internet to spread the word and transfer data.

Summary
The conference keynotes and technical demonstrations by Esri staff clearly showed that the company has been busy working on ArcGIS and it’s Online portions. While previous conferences included some nifty technical add in components, what I saw this time around suggests a string of applicable applications all inter-connecting toward a purpose. And that meant laying foundational blocks toward ArcGIS in the cloud, I think. All the pieces are starting to come together since I first heard Jack Dangermond use the word ArcGIS. Some of these developments, like drag-and-drop CSV files onto maps are spectacular. Intelligent Maps are going to cause product users to really engage the cloud once they get used to using them.  I would not be surprised if next year’s event talks about GIS In The Cloud – fully. We will have to wait and see what comes in Norway.

Additonal blog entries from this event:

Dangermond Sets Out the GIS Cloud Vision in Madrid