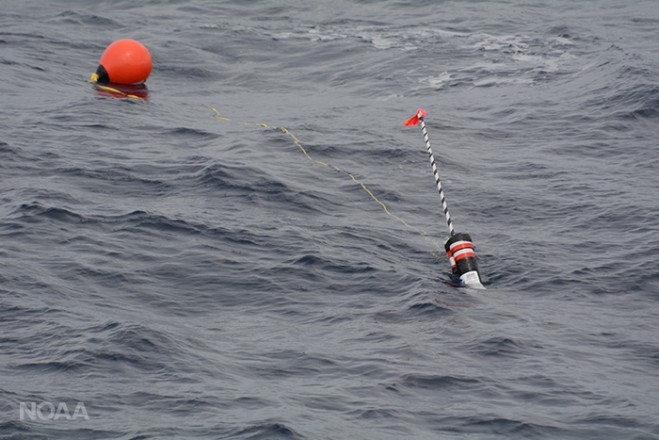 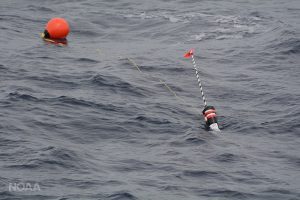 NOAA is deploying 20 whale-listening buoys off the California coast. While collecting data, each buoy is expected to drift as much as 10 nautical miles per day. (Credit: NOAA Southwest Fisheries Science Center)

Using a new system of drifting buoys, scientists from NOAA’s Southwest Fisheries Science Center in La Jolla, Calif., will have a much better chance of hearing beaked whales in their deep-water habitat off the West Coast.

About 20 buoys will be deployed from a NOAA ship with a listening device suspended 330 feet below the ocean surface to record the whales’ vocalizations. During the 20-day deployment, each buoy is expected to drift as much as 10 nautical miles per day and cover 100-200 miles over the course of the survey.

“The great advantage of the buoys is that their collective 400 days at sea is like increasing our ship effort by a factor of 10, with very little increase in cost,” said Jay Barlow, co-chief scientist of the survey.

Paired with listening devices towed behind the ship and a visual observing team onboard, this survey should provide valuable new data about a group of whales considered to be in decline. NOAA scientists estimate that one of the better known species of beaked whales, Cuvier’s beaked whales, declined from more than 10,700 individuals in 1981 to 7,500 in 2008.

The data on beaked whale abundance, distribution and vocalization patterns gathered during this research survey will help scientists understand these mysterious whales, so NOAA and partners can work to protect them.