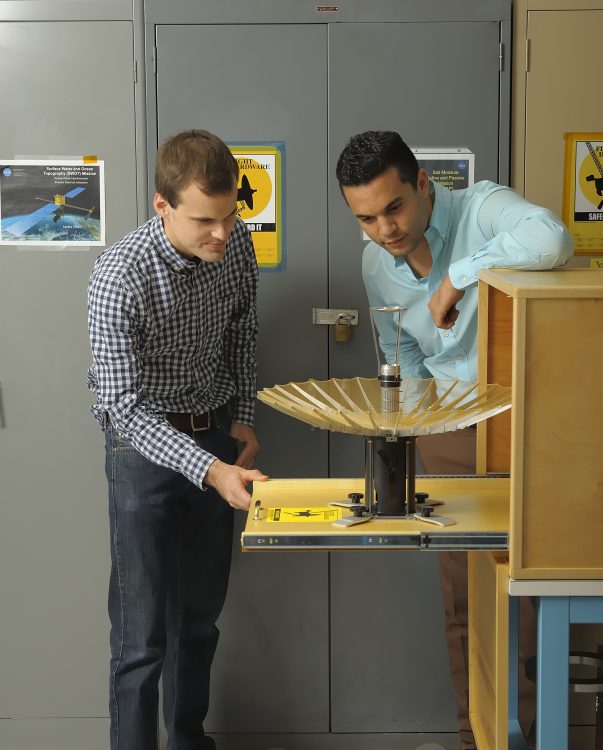 Scientists at NASA’s Jet Propulsion Laboratory (JPL) in Pasadena, Calif., have been working on the tricky problem of CubeSat transmission antennas, which must be small enough for these diminutive devices yet still transmit data through the huge expanses of space.

“It’s like pulling a rabbit out of a hat,” said Nacer Chahat, a specialist in antenna design at JPL. “Shrinking the size of the radar is a challenge for NASA. As space engineers, we usually have lots of volume, so building antennas packed into a small volume isn’t something we’re trained to do.”

Chahat worked with a CubeSat team on the antenna for Radar In a CubeSat (RainCube), a technology demonstration mission scheduled for launch in 2018. RainCube’s distinctive antenna looks like an umbrella stuffed into a jack-in-the-box; when open, its ribs extend out of a canister and splay out a golden mesh. As its name suggests, RainCube will use radar to measure rain and snowfall.

“Large, deployable antennas that can be stowed in a small volume are a key technology for radar missions,” said JPL’s Eva Peral, principal investigator for RainCube. “They open a new realm of possibilities for science advancement and unique applications.”

To maintain its relatively small size, the antenna relies on the high-frequency, Ka-band wavelength—something that’s still rare for NASA CubeSats but is ideally suited to RainCube. Ka-band also allows for an exponential increase in data transfer over long distances, making it the perfect tool for telecommunications. Ka-band allows for data rates about 16 times higher than X-band, the current standard on most NASA spacecraft.

Development of RainCube’s antenna can test the use of CubeSats more generally. Although most have been limited to simple studies in near-Earth orbit, the right technology could allow them to be used as far away as Mars or beyond, opening CubeSats to a wider range of future missions.

“To enable the next step in CubeSat evolution, you need this kind of technology,” said JPL’s Jonathan Sauder, mechanical engineer lead for the RainCube antenna.