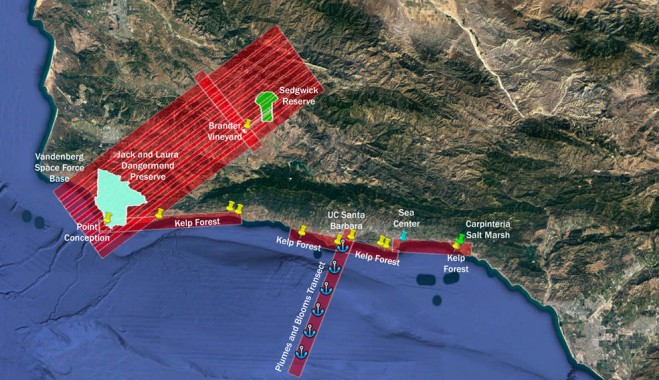 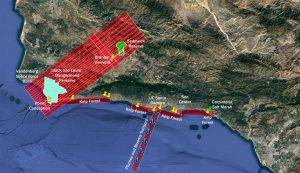 The SHIFT campaign uses a research plane carrying the AVIRIS-NG instrument to collect data on the function, health and resilience of plant communities in the 640-square-mile (1,656-square-kilometer) area of Santa Barbara County and the nearby ocean shown in this annotated map. (Credit: NASA/JPL-Caltech)

With a plane crisscrossing the sky and researchers working on land and sea, the Surface Biology and Geology High-Frequency Time Series campaign (SHIFT) combines the ability of airborne science instruments to gather data over widespread areas with the more concentrated observations scientists conduct in the field to study natural environments.

SHIFT is jointly led by NASA’s Jet Propulsion Laboratory, The Nature Conservancy, and the University of California, Santa Barbara (UCSB), and one of its primary goals is to generate the most precise, high-time-frequency data on plant and aquatic communities ever collected over such a vast region. The 640-square-mile (1,656-square-kilometer) study area, which stretches from Los Padres National Forest in the east to the Central California coast and into the coastal ocean in the west, includes some of the most dynamic ecosystems in the world.