October 24th, 2010
Be Inspired 2010 – Information Modeling for the World’s Infrastructure

It has been a few years since Bentley Systems last held a large event in Europe, and one might think that the middle of an economic downturn would be an unlikely time to hold such an event. Not so. If the last few days in Amsterdam, The Netherlands are any indication, the infrastructure market continues to grow. Data shows users are deploying Bentley MicroStation software for more hours per week and the number and kinds of infrastructure projects operating continues to intrigue, interest and demand creative, intelligent modeling solutions.

Four hundred executives involved in infrastructure from 35 different countries and 60 media personnel gathered together for the Be Inspired: Thought Leadership in Infrastructure invitation only event. In attention to thought leadership presentations the event included the 2010 Be Inspired Awards – given to finalists chosen for the calibre of their infrastructure projects. 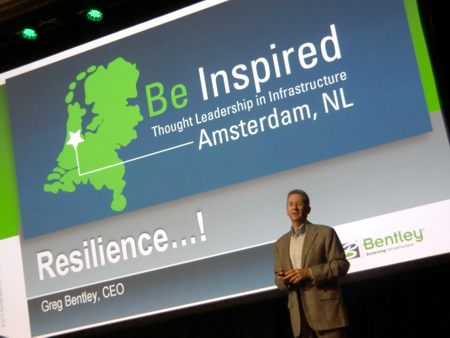 In this respect the company is unique due to the fact that it builds this integration upon a foundation of MicroStation V8i that integrates and extends a product line stretching through civil engineering, architectural, earth science, geotechnical and spatial information professionals. “We continue to progress towards the goals of our AssetWise initiative, which was first announced last February,” Bentley said.

Information modeling encapsulates more than a system of individual components. As Bentley Systems has acquired individual companies from structural, construction, energy management, simulation and other infrastructure areas over time, the challenge has been to integrate all of them into a cohesive system that would offer a compelling set of products to customers and leading infrastructure developers worldwide.

This transition has been happening for a few years now with Bentley making progress and disucssing the advances at each event along the way. The trail has been truly evolutionary, innovative and characterized by increasing level of integration – and further product development – along the way. This event was no exception.

Delivering intelligent infrastructure
With a goal to deliver higher levels of intelligence into infrastructure processes, Be Inspired 2010 marks resilience in the company’s growth, achieving year-over-year organic growth. The new OpenPlant Modeler V8i product, used for designing and operation of Plant infrastructure has been welcomed into the marketplace. Based on open standards, it continues to draw the interest of UNIX-based existing users. Bentley’s Navigator V8i and ProjectWise V8i are enabling higher levels of interest due to their enhanced functions that allow greater collaboration. 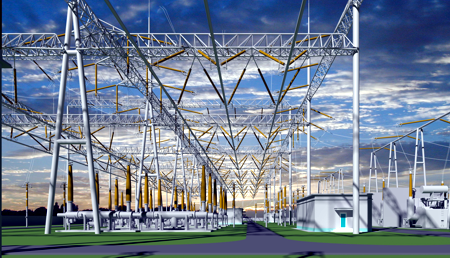 Central Southern China Electric Power Design Institute – Jiangxia 500 kV Transformer Innovation in Utility Transmission A new Bentley Infrastructure 500 Top Owners ranking has been organized and created for the first time. The list provides a compilation of private and public organizations involved in infrastructure around the world from 46 countries. Informative and insightful, the list represents USD $13 trillion in infrastructure investment.

And, although we live in a time where governments are involved in funding projects, the list clearly identifies that private industry is well ahead in terms of project financing and development.

ProjectWise is used by the majority of the Top 100 design firms in the world. In the Netherlands, Bentley Systems products can be found in over 50% of the communities.

Meanwhile new and unique private-public partnerships are being developing in U.S. States such as New Jersey.

Innovation in utilities
Bruce Boyd and associates from PCS – Precision Contracting Services Inc. of Florida reported on a new application that his company has developed. Organized around delivering improved fibre optic telecommunications networks, PCS developed a FibreTrak, a system for database exchange of processes in the network work flow. 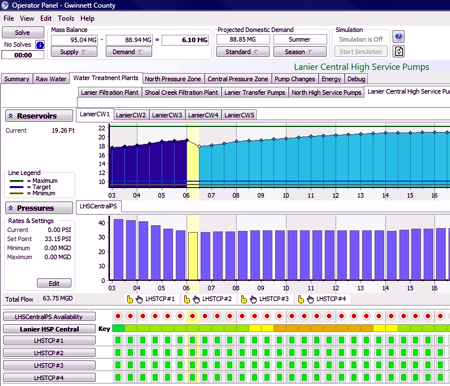 CH2M HILL – Implementation Stormwater Networks and Pumped Storage Power Delivered to the Department of Transport in Florida and South Carolina, the previous difficulty has been to incorporate as-built documentation.

Much of this exists on paper, is fragmented and disjointed across the network and has several duplicate mobilizations. It often suffers from lack of depth, ineffective trouble shooting and is not geo-referenced information.

Based on MicroStation V8i platform, the system incorporates a range of formats into one integrated system. It checks passive elements of cabling, improves trouble shooting and ensures asset preservation. It also includes intelligent PDF for route documention as well as a link to schematic documentation in geo-referenced space.

GeoWeb Publisher is used to provide individual fibre information and system names. The system can be operated remotely and provides a connection for use to Google Earth.

Portions of the network are also IP based, thus addressable right down to serial numbers if necessary. Net benefit includes a 33% increase in efficiency with a return on investment of 25% and an increase in hosted network fees of 66%.

The goal of the project was to increase efficiency in documentation, integration of schematic data, enterprise storage without duplicity, optimisation of licenses and open database. The system was based upon an Oracle database and included automated migration procedures. It was estimated that the project saved 170,000 Euros per year. 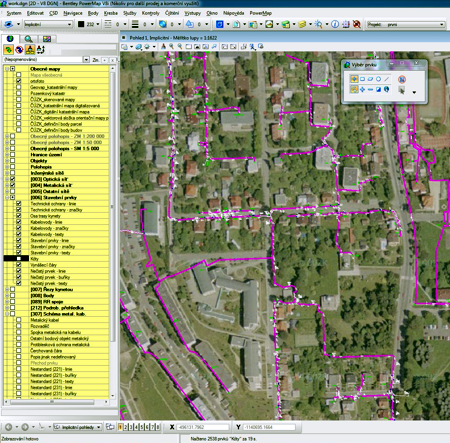 Telefónica O2 Czech Republic – XFM Moves Maps – Innovation in Communications Laser scanning point clouds for 3D model design
Reliable Point Cloud Modeling was presented by imp GmbH. The company provides improved asset assessment and management through the use of laser scanning. The concept behind the approach is to gather a point cloud model and to create ‘True Asset Models’ – often re-engineering the existing grid, and effectively geo-referencing all infrastructure within the assessment using this technique.

This work has been employed in the City of Berlin, Germany where a variety of infrastructure has historically been managed through disparate data systems, technologies and approaches.

Many of these information exist on paper and are often difficult to assess and understand, particularly since they include Russian language and notations prior to the fall of the Berlin Wall.

As presented, a new 3D assessment, including the use of Leica TruView has been employed, with much of a single substation being assessed in less than a week and dynamic cross-sections of the information provided.

Benefits included greater consistency, improved graphical representation and the ability to integrate information at different scales across the landscape.

The goal of this project was to explore substation design using new approaches and 3D figured prominently into the mix, providing new insight. It is a Class-A engineering design project.

For 9 years in a row, SNPDRI has been the leader in power design in China. It has passed ISO 9001, ISO 14001 and OHAS 18001 certification and is allowed to conduct Conventional Island designs that employ super-critical core units. It is involved in projects in 26 of 31 of China’s provinces. It adopted 3D design into the USD $400 million investment of electrical projects.

Net benefits include a shortening of the project lifecycle design, development of electrical component models, error checking routines, increased efficiency in engineering. Geopak Model has been used for complete rendering.

A second project involves a 750 kV transformer substation. Bids and tenders have been completed and the project was designed in a total of 9 days. Visualisation was included into the project as a means to increase collaboration. 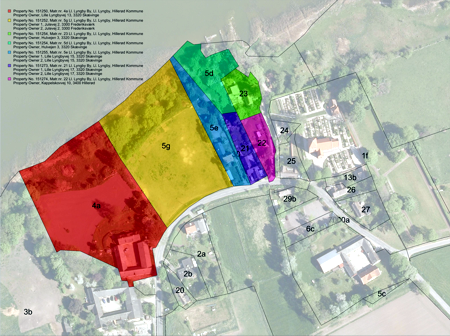 Tvilum Landinspektørfirma A/S – Optimized Mapping Using Web Feature Services (WFS), Innovation in Government (includes Cadastre and Land Development) Innovation in 3D geological mapping
‘Ryolite Volcanism 3D Geological Maps’ won a Be Inspired Award in the category Innovation in Geotechnical and Geoenvironmental Engineering. Produced by the State Geological Institute of Dionyz Stur, Spiska Nova Ves, Slovakia this project although appearing simple from a visualisation perspective entailed a great deal of work resulting in a detailed 3D geological survey for an area almost 50 sq. km. in size. It included geotechnical surveys and classifcation of the geology for the region in Slovakia.

It included 40 depth profiles across the territory, and transformation of the information into 3D space using MicroStation V8i. Graphic presentations for several surfaces were produced.

Constructing a container port in Italy
‘Project Financing, Vado Ligure Platform’ is a USD $439 million project in Italy that proposes a designed port facility and container terminal. Using MicroStation InRoads, the project has to be precast to avoid detrimental silt conditions. It handles ships to 30,000 t at the port and icnludes new customs buildings, motorway, bridges and a road-rail link for load and unloading.

The work included 1,600 piles to 50 m in depth and a 5 year construction time. It will include 28 cranes and performance criteria to ensure no movements greater than 2.5 cm vertical on the structure. This project included an environmental assessment that also involved a noise management plan.

Water management and design
The Executive Roundtable Leveraging SCADA and Asset Information to Support Operations in Water Utilities proved to be one of the highlights of the event. Led by Jack Cook, VP Water Solutions for Bentley, the discussion in this session provided a wealth of information about water supply, treatment and the distribution of water throughout urban networks. This included the monitoring technology, and as the discussion went, details about the consideration for different approaches in developing, managing and operating water networks. 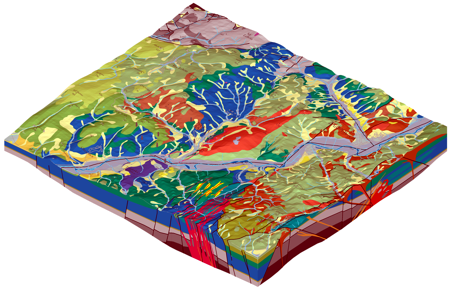 Water rights and the management of shutdowns and orders were also included into this work. Key to this project was the idea of saving energy in water pumping-processing costs, provided that greater efficiency in the system could be achieved.

Ultimately a Ranking Matrix that encompassed the solution variables was developed. It enables the management of processes down to the time of the year. SCADA optimisation and programming strategies have also been identified.

Westernport Water won a Be Inspired Award for the project ‘Integration of SCADA Data in Model Calibration’. Located in Newhaven, Australia this project provides water, wastewater, recycled water and gas services to nearly 16,000 residences. Using WaterGEMS and SCADAConnect, this work integrated numerous sources of real-time data into one combined system. This system embodies decision support into the decision making process. This model uses GIS identifications and is based on a Oracle database.

The discussion surrounding this presentation was interesting as it covered the reasons for establishing a water model and it’s effective value, although cost was obviously involved. Nevertheless, such water models are dependent upon accurate data and they do ultimately pay for themselves in terms of value delivered back into the system. Such features as leak detection ar emore readily identified and water quality issues can be ascertained more readily.

Summary
Be Inspired 2010 provided strong indications that infrastructure projects are proceeding around the world. This event provided many examples of projects in the planning, construction and operation stages. The take away message from this event is focused upon the many users who attended and their projects. Many of these projects are integrating the benefits of integrated collaborative design and are based upon information modeling to achieve efficiency and improved performance. There is a secondary message in this event, one that Bentley has been working on a while now, and whose strength continues to grow – the company is integrating a broad range of software technologies into one cohesive modeling environment that operates interactively, dynamically and based upon user needs and requirements. Furthermore, all information is now geo-referenced. At this time the company is refining the product lines, tightening the coupling between the components and introducing new innovations to enrich applications.

Also blogged by Vector1 Media at this event: