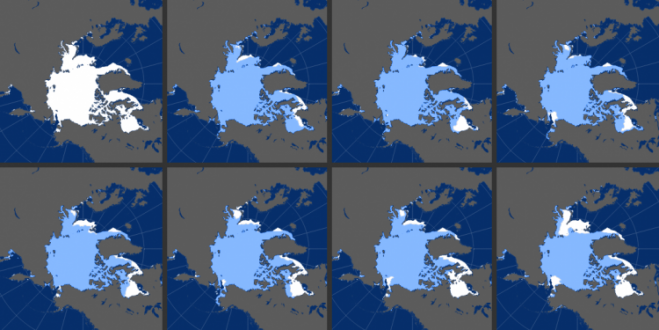 Every northern fall and winter, cooling ocean and air temperatures cause the floating cap of Arctic sea ice to grow from its annual minimum extent toward a maximum between February and April. So far in 2016, however, the Arctic Ocean and neighboring seas have been slow to freeze, setting both daily and monthly record lows.

“The October freeze-up was very slow and that continued through much of November,” said Walt Meier, a sea ice scientist at NASA’s Goddard Space Flight Center.

In November 2016, the sea ice extent averaged 9.08 million square kilometers (3.52 million square miles)—the lowest November extent in the satellite record. Every November is different, as freeze-up is influenced by factors such as water temperature, air temperature and wind patterns. All three factors played a role in the November 2016 record low.

“Times of very slow or even no increase in extent over a few days are not particularly unusual,” added Meier. “But to actually have the extent go down over four to five days in mid-November does seem quite rare.”

A key reason for the record lows is a warm ocean. During the summer, large expanses of dark, ice-free Arctic water were absorbing solar energy and warming. Until that heat escapes to the atmosphere, sea ice cannot form.