AGIT / GI Forum 2008 is a major international symposia and exhibit held yearly in Austria at the University of Salzburg. It not only offers a successful dual Deutsche-English language format, but it manages to combine industry, government and education authorities into one action packed, three day program together with an exhibition. New technologies and applications emerging from central and south eastern Europe are in abundance at the conference and a vibrant poster competition takes place.

Celebrating 20 years, the agit 2008 opened in Salzburg, Austria along with the second Geoinformatics Forum at the Zentrum for Geoinformatik – University of Salzburg. The first event is a Deutsche language event while the Forum is an English language event.

With about 1200 people in attendance, the event program includes 150 presentations, workshops and demonstrations from a large number of companies originating from central Europe in addition to many international companies in attendance for the AGIT Expo which included dozens of industry, government and institutional agencies presenting their latest products, research and services. The GI_Forum, under the theme ‘Energy for the Future‘ provided an inter-disciplinary opportunity for people interested in sharing new methods and techniques surrounding the field of geoinformatics.

Josef Strobl, Director of the Zentrum at Salzburg University (see full report) gave the opening remarks inviting guests to the event including the Mayor of the City of Salzburg who proceeded to announce that Salzburg had just signed an agreement with Autodesk and the Zentrum for Geoinformatik to produce a 3D Digital City Model. 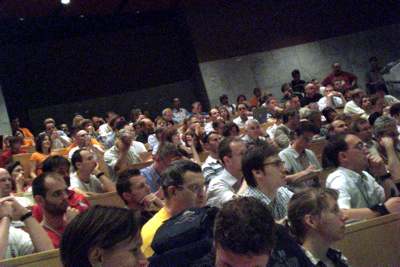 He pointed out that the authoritative creator’s of geographic information such as the USGS, Ordnance Survey UK and other national and international bodies were now being challenged by the efforts of amateur or non-professional content contributors. Whereas experts would create and disseminate spatial content previously, that has changed, although the handling of spatial content in the U.S. has also changed since 9/11.

{sidebar id=167 align=left} Goodchild indicated that highly official bodies would previously create names for places and said the U.S. Board for geonames was set in 1890. He immediately mentioned that when Waldseemuller sought to name a new land mass ‘America’ in 1507 he did so without any official titles to the name – in recognition of Vespucci.

“Contributed content has many names including, collective intelligence, converging truth, crown sourcing etc. and all of them imply an ‘asserted’ position, he said.” They guarantee no truth, no authority and are provided through untrained individuals. He showed some examples from his own neighbourhood and Ayres Rock that included geoinformation provided by volunteers. In other cases, like OpenStreetMap, edits could be made for incorrect data and in some cases the systems handling these maps were capable of editing themselves, he said.

Goodchild pointed to the weakness of this method of aggregating spatial information in emergency situations using the Hurricane Katrina event as an example, where “the lack of computers, internet service and even power all rendered the possibility of user generated content pointless.” On the topic of national directives and efforts, he mentioned that many agencies had relieved themselves of the task of authoritative mapping agencies and spatial content providers through their lack of funded data collection and management, focus and deteriorating sizes – all setting the scene for a change in the way authoritative products are created. 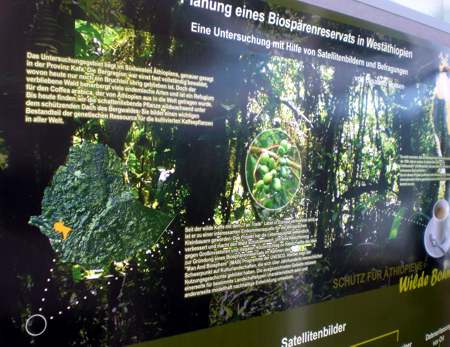 “In essence, the top-down has been replaced by the bottom-up and the barriers to entry are next to nil.” Goodchild also wondered how long Google Earth would be able to scale, since the amount of data being indexed in total must be filtered for the geospatial answers and the flow of information is not only one-way but two-way. On the topic of Service Oriented Architectures (SOA) he mentioned that each service can handle data in different ways. “We are moving into a real-time GIS environment” and SOA is enabling this, Goodchild noted.

“Why do people do this, why do they contribute information for free?” In part it is self-promotion, part altruistic and part that they simply enjoy it and have fun. There are many uncertainties about how to integrate non-authoritative information into science, for example, but the goal remains to be able to work together. His comments echoed those currently being voiced by many people around the world as new technologies are enabling more people to participate in creating and using geographic information around the world. There is little doubt much more thought and discussion are warranted on this topic.

Presented over three days, the GI_Forum brings presentations before a large audience enabling discussion, questions and the opportunity to share and learn.

Stephan Winter of the University of Melbourne presented what he termed the Spatial Turing Test, a means to determine if interfaces were spatially aware.

Andrew Frank, TU Vienna, Austria gave a Keynote address entitled ‘Formal Ontologies for GIS: Current State and Challenges’.  The idea here was to understand whether or not one is talking to a computer or a real person when trying to ascertain helpful information. 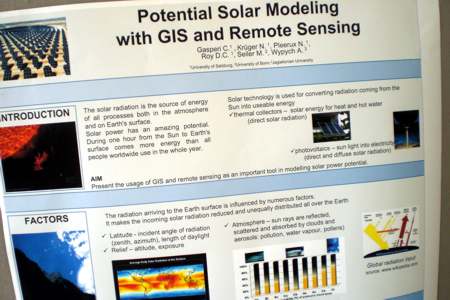 Using the Deutsche Bahn as example, he pointed to the fact that train schedules always ask where you are travelling from – which a real person would infer in other ways. The key behind many of the interfaces was to learn to understand the expectations of acquiring specific information. He presented several ontological tiers including, sensor data, objects and social constructions.

Using real money and game money, Frank described the social expectations associated with money in relation to physical objects. On a similar note, he pointed out the social constructions associated with cadastral survey, which  s different as compared to simply pointing to four corners of a lot, as example, and defining it as a legal survey.

The current state is somewhere between tier 2 and tier 3 (objects – social constructs). Frank mentioned the power of language, identifying the usage of synonyms and translations as a means to find information using search engines. One approach combines statistics for finding information and how words come together (see more).

Frank outlined a future research agenda that included the need to understand and research processes, a need for research into methods and tools to support ontological systems and development of libraries of process models built on standardised description languages.
{sidebar id=170 align=right}

The quality and variation of the papers presented during the forum were excellent and can be found in the Proceedings of the Geoinformatics Forum Salzburg 2008 which each attendee receives a copy of upon registration.

Global Monitoring Discussion Session
A unique and interesting sub-event during the GI Forum was held at the end of the second day. The Global Monitoring Discussion Session involved several presentations before attendee’s broke into smaller discussion groups, rotating among the presenters to learn and ask more questions. Upon completing the discussions, the larger group discussed the converged results. Presentations for this event included (see inset), 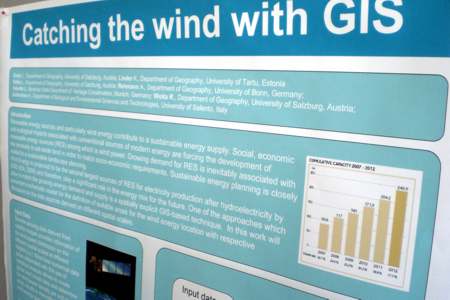 Poster Session
The conference also included a poster competition. The range and types of posters presented was unique and included several posters related to the conference theme surrounding environmental issues. Solar energy analysis, geo-thermal mapping, image segmentation and many other subjects were presented.

Summary
agit 2008 and the GI Forum has grown to become one of the major conference / symposium to be held yearly in Europe. The combination of Deutsche / English language presentations serves to provide something for everyone and goes beyond INTERGEO more successfully in reaching out to a wider English speaking group. Perhaps this is a logical extension of the GI Zentrum Salzburg, which is involved in international projects across all continents.

The program is well organised and the AGIT EXPO brought together a number of GI related companies that emerge from central Europe with new and exciting approaches for handling spatially related problems. While I did find some of the presentation slides to zoom by at supersonic speed at times, making it hard to follow, overall GI Forum presentations were excellent and highly topical.

Events like this help one to see that the world’s problems are being tackled successfully and people are investigating them with new tools and approaches. Josef Strobl, Adrijana Car and the AGIT / GI Forum teams are to be commended for putting together one of the best conference programs a GI professional can attend internationally.