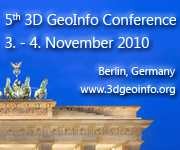 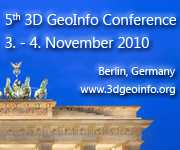 The 5th International 3D GeoInfo Conference was held in Berlin, Germany on November 3-4, 2010. The event included a wide range of speakers from government, industry and educational research who are involved in the use and application of 3D geospatial technologies and development. Held at the Technical University in the center of the city, the event also included a poster session and a industry exhibition of new products and services.

Presenters approached the issues related to 3D from a multitude of angles. Some displayed work related to 3D City Models, others on 3D visualization, policy development, data interchange between computer-aided design (CAD) formats and with geographic information systems (GIS). The use of 3D in sea charts, geology, energy, utilities and transportation were also presented.

The first 3D City Model in Asia was developed in Malaysia. Alias Abdul-Rahman presented a paper entitled ‘Incorporating 3D Spatial Operator with Building Information Models in Construction Management Using Geo-DBMS‘.  This work is interested in the use of 3D-GIS for construction design. The Geo-DMS application automatically updates the building information model (BIM) semantics into Geo-DBMS. This project covers an area of 1km by 4km in the city of Puttajaya and is CAD based at a LOD3 detail level.  It involves the creation of a codelist for transformation and uses CityServer 3D.

A poster presented by J. Finat talked about GIRAPIM, A 3D Information System for Surveying Cultural Heritage Environments. This work seeks to link cultural heritage values into CityGML work.  In this research Collada models are also coupled to CityGML and living objects may also be included too. Issues include the ability to track locations and the
need for exchanges between different agents.

Other posters presented include GeoVista AB – 4D Geological Modeling as a means to discover new ore bodies. This work is based upon predictive modeling. Genetic Algorithms for Dynamic 3D Models involves research that is used for evacuating buildings in emergency situations. This work follows earlier 1975 work from John Henry Holland on complex adaptive systems.

Another poster included research results for 3D Modeling of Multi-utility Networks and the Inter-dependencies for Critical Infrastructure Analysis. This effort relates to the high need for having a common set of terminologies and map relationships for infrastructure that can be used in emergency situations. As more 3D City Models are created, the need for common or standardized approaches to symbolize and understand semantics within them is required.

Work on BIM and GIS integration led to the development of a GEOBIM Extension developed in The Netherlands. This work suggests that the GIS spatial operators play an integral role in this integration that also extends to CityGML.

Interactive Rendering techniques for Highlighting in 3D GeoVirtual Environments (3D GeoVE) was an informative and interesting presentation that described different techniques for highlighting 3D objects, thereby supporting the idea that different objects within 3D environments could then be more quickly perceived. This work, supported by the Hasso-Plattner Institute in Potsdam, indicates that the “geometrical complexity of 3D GeoVE often requires specialized rendering techniques for the real-time image synthesis.”

Depth Perception in Virtual Reality was presented by Anja Matatko of the University of Trier. This work investigates 3D models from a perception viewpoint. She queried whether or not depth perception helps and how also discussed how people react to it. It was interesting to learn that many people have poor depth perception. However, the inclusion of visual cues can aid to provide better perception, particularly with ground surfaces including more details.

Keynote – Collaboration and sharing value
Ron Lake of Galdo Systems based in Vancouver, Canada presented the keynote on the second day of the conference. His presentation – ‘Collaboration and sharing – Maximizing Value in 3D City Models’.  “We need to deal with information sharing both in the use and creation of city models – the models must be sustainable,” he said. Lake says that cities mean different things to different people and that there is no one standard means for classifying them. “The concept of what a city really is may extend well beyond the city itself,” he said. “Cities are in competition around factors related to the quality of life.”

He suggested that we need to be smarter when it comes to building cities. “Cities are complex and these parts impact each other, they are dynamic,” Lake pointed out. Accordingly, he suggested that city models must meet the challenge of responding to this dynamic nature. “All kinds of organisations are involved in the design and evolution of a city.” That indicating it is not only planners and architects who are involved, but also engineers and the general public.

“3D and 4D city models can best be exploited through the use of collaboration and sharing,” Lake continued. He does not like the words spatial data infrastructure (SDI) though, since they connotate little sharing and represent more like top-down implementation structures. “Models should provide rich semantics.” He also indicated that models are not new, using an image map from the 16th century that essentially included elements of of a city growth model.

Lake raised the point that while some people advocate today that higher density cities are the answer to urban sprawl and lower energy, in fact, they contribute more pollution into these higher density spaces impacting air quality. Such examples give rise to the need for better collaboration with engineers who can design dense areas that provide better velocity airflows, air flushing capacity and improved boundary layers. “We need to see higher levels of sharing at the numerical model and engineering levels,” he said.

Improved computer negotiations are the answer to increasing sharing he pointed out. “We need to inform people when data changes, pushing information about changes to them.”

In his view all data is communicated between systems and an intelligent form of integration addresses all parts of the information workflow for a particular area or objects, then sends out notices to subscribers. These can include all kinds of information, not only geospatial information, but also text, images and other forms of communication.

Rhinoceros is a NURBS modeling tools for modeling in 3D. I sat through a demonstration of this project as a landscape terrain was created in 3D and building information models imported to the terrain. It includes a photo-realistic rendering engine that is fast. Architecture, scenes and transport can be modeled using this software.

I also spent some time with con terra, a German based company that is significantly involved ArcGIS for INSPIRE. During this visit spent most of my time on the Feature Manipulation Engine (FME) software from Safe Software, learning about the latest updates for both Desktop and FME Server versions. This software is receiving greater attention in the BIM / GIS space because it helps to provide the needed integration between CAD and GIS environments, but also supports CityGML work.

CPA Systems is also based in Germany and the product supports GIS / JAVA 3D (SGJ3D) and is programmed in Java software.  It is based on the framework of  ISO/OGC  standards and conforms to a database model that allows users to describe object-oriented spatial data and to project it to a database schema. GTA Geoinformatik GmbH also provides 3D City Models along with Virtual City Systems.

Other posts during this event include :