Verizon Uses Drones for Cell Site Inspections in the Carolinas in Wake of Hurricane Matthew, Another Tool for Reliability

RALEIGH, N.C  —   Verizon is using drones to help with cell site inspections from the air in North Carolina and South Carolina to survey areas impacted by severe flooding from Hurricane Matthew. The quadcopter used for the inspections is an unmanned aerial system (UAS) operated by Measure UAS Inc., to inspect cell sites in difficult

Throughout the developing world, access to lifesaving and critical health products is hampered by “the last-mile problem”: the inability to deliver needed medicine from a city to rural or remote locations due to lack of adequate transportation, communication and supply chain infrastructure. To lessen this problem, the Rwandan government will begin using drones to make 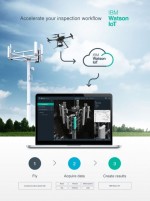 One of the world’s first automated inspections by an intelligent drone with deep learning capabilities was demonstrated at the GPU Technology Conference Europe today by Aerialtronics, a Dutch manufacturer of technologically advanced drones, Neurala, a pioneer in deep learning software, and NVIDIA®, the world leader in GPU-accelerated computing.   Video GTC Demo:  https://www.youtube.com/watch?v=-bQYzR5kARM This new

RALEIGH, N.C. – PrecisionHawk Inc. – a leading provider of aerial data and safety platforms for drones – today announced the launch of its low altitude traffic and airspace safety platform (LATAS). LATAS is the only platform to link drones, 3d ground data and live manned aircraft data from the FAA into a single system that

NAGOYA, Japan  — Prodrone Co., Ltd. is pleased to announce it has developed the PD6B-AW-ARM, a large-format drone equipped with two internally-developed robotic arms, enabling it to directly accomplish a variety of tasks. PRODRONE will showcase the new model at its booth at InterDrone, The International Drone Conference and Exposition, to be held September 7-9,

NAGOYA, Japan–Prodrone Co., Ltd. is proud to announce it has developed the PD6-CI-L, a self-propelling surface-clinging drone able to inspect both ceilings and vertical surfaces, for the civil infrastructure inspection market. PRODRONE will showcase the new model at its booth at InterDrone, The International Drone Conference and Exposition, to be held September 7-9, 2016 in