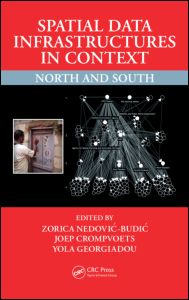 Spatial Data Infrastructures in Context – North and South discusses both technological and non-technological obstacles, policies and mechanisms with respect to the implementation of spatial data infrastructures (SDI). With an emphasis on non-technology issues such including legal, policy, copyright, liability and compatibility factors, the editors provide a wealth of information aimed at improving access, interoperability and affordability with reference to SDI. This book contains content that is applicable to both public and private participants.

The editors indicate that the widespread use of geographic information systems (GIS) provides the clue that a growing need and desire for geographic data use exists. Although many applications have tended to follow specific applications, the interest of those involved in spatial data infrastructure (SDI) is to expand access, increase use and to provide greater affordability to spatial data. In addition, these SDI are oriented toward improved integration and interoperability, such that independent applications can be readily inter-connected to each other. Thus, these connected individual portions for connected systems.

The heart of SDI thinking is aligned toward the database and technology itself as compared to public policy emanating from hierarchical approaches originating from the top-down. On this basis the editors indicate, greater freedom and access exist together with more transparency, since, anyone and everyone can have access to the data of SDI.

SDI follow the definition by Masser (2005), “spatial data infrastructure supports ready access to geographic information. This is achieved through the coordinated actions of nations and organisations that promote awareness and implementation of complimentary policies, common standards and effective mechanism for the development and availability of interoperable digital geographic data and technologies…”

SDI in general have emerged mostly in heavily populated and concentrated local and regional areas as compared to vibrant national strategies. This relates to the sense of bottom-up approach and greater access to geographic data for administrative and e-governance initiatives. Research and methodologies for studying and applying SDI are not yet fully engaged, much is uncertain, unknown and has not yet been identified with respect to how they operate.

Indeed, one might argue that they vary in uniqueness, based upon the situation where they are implemented – and the needs, participants and funding of projects. Much has been written about SDI around the world with differing experiences emerging from different places. Project nodes such Space for Geo-Information (The Netherlands), Cooperative Research Centre (CRC) for Spatial Information (Australia), GEOIDE, Geomatics for Informed Decisions (Canada) and the Joint Research Centre, Institute of Environment and Sustainability (European Commission) are all providing the bulk of discussion and research regarding SDI.

This book is divided into several sections including Institutions and Organisations, Data and Technology, People and Practices and Sense-Making and Summing Up. The editors have oriented the material to address questions such as, “Defining the Role of Government: Why Does it Matter?” Information includes topics surrounding public debate, public interest and issues related to uncertainty in relation to information for public use and policy.

The merits of institutionalized SDI are discussed. The subject of land administration implementation is also discussed whereby research methods, data gathering and issues related to their results for SDI use are included. This material is aligned to readers working with SDI in developing countries who may be developing government administrations oriented toward SDI. Nicaragua, El Salvador and Guatemala are mentioned. Readers will quickly learn that standards, negotiations and sharing are all integral components of successful SDI, and the book describes how they form foundation elements to SDI building. However, one Guatemalan example clearly describes how land administration systems are viewed by citizens as compared to scientists and international scholars – whereby citizens can accurately describe what they expect SDI systems to do – a case of semiotics.

Most people working with spatial data will have come across “institutional jealousy” – a term identified in this book as organisations who seek to control their data and avoid working with others. Since cross-institutional goals are the expected outcome, the book suggests that we find better ways to motivate people to share resources, particularly geodata. The editors provide a table outlining themes as compared to tactical models for solving such issues.

A discussion about ‘business processes’ describes how inter-related SDI activities give rise to innovations that go beyond individual organizations. Such business processes, sitting within SDI, not only gain access to more resources under SDI efforts, but they also achieve higher efficiency through greater standardization and enhanced interoperability. The book describes such connected organizational structures and their functional components. The editors note surveys that have been completed to gauge the motivations for sharing data between spatial data users. Interestingly, these include questions aimed at both internal and external factors involved in motivational forces.

SDI Reality in Uganda is included in Chapter 5. It provides an indication of the need to understand public sector context for working with SDI and also includes cultural factors relating to that participation. This chapter allows readers to see the development of SDI within a country and some of the issues involved over time. It is interesting to learn that, resistance sometimes comes in the form of feeling unequal as a participant, thereby witholding participation. This is different than institutional jealousy, since it’s motivation originates outside of organisation control, relating more to the individual. On the other hand, “no agency head is willing to subordinate his or her organisation to a procedure that allows other agencies to define tasks or allocate it’s resources.”

This last statement is a critical one. After all, how often have you heard people in your own organisation indicate – “our organisation does not allow us to work together?” This seemingly pointing to a need to reconstruct entire organisational structures.

A later chapter describes the case of slums in India and how SDI can be enlisted for urban planning purposes. The role of SDI is debated and interpretations with respect to spatial data are viewed through differing perspectives. The editors summarize in the final chapters that SDI are not only about technology alone. By necessity, SDI include consideration of organisational structures and their policies. And that is the real message of this book.

In summary, I find this book informative on the topic of SDI. Although the book tends to launch more questions and open more debates on the subject of SDI without answering all questions, it serves to increase awareness and to cause readers to think beyond SDI-related technology alone. This book opens the door to discussions on SDI and organisational polices and how the two relate. I would recommend reading this book for those interested in SDI, e-government and policy-making.