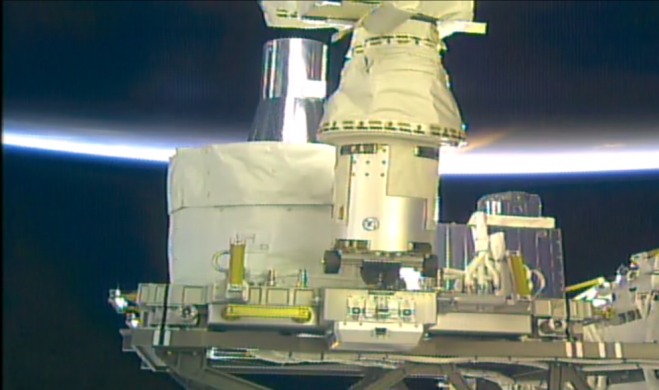 Just a little more than two weeks after its Feb. 19, 2017, launch on a SpaceX Falcon 9/Dragon spacecraft, the Stratospheric Aerosol and Gas Experiment III (SAGE III) is now safely installed on the outside of the International Space Station, where it will monitor ozone and aerosols in Earth’s upper atmosphere.

In a highly choreographed sequence of events, the station’s robotic Canadarm2 removed the instrument payload and its Nadir Viewing Platform (NVP) from the Dragon trunk and installed them on the ExPRESS Logistics Carrier platform. The entire sequence took about four days. The NVP allows SAGE III to face nadir, or down, toward Earth.

“With a flawless launch and the on-orbit assembly sequence behind us, the SAGE III and space station teams have completed a major milestone,” said SAGE III Project Manager Mike Cisewski. “Our team is ready to proceed with payload commissioning and our long-term work of extending the SAGE data record from the station.”